Welker’s claim came as part of her report on the 2016 campaign for the newscast following the six minutes of coverage on the final day of Pope Francis’s first visit to the United States with weekday anchor Lester Holt stepping into anchor Sunday’s program.

Leading into Welker, Holt reported that a new poll (from NBC News and The Wall Street Journal) “shows the presidential race tightening for both Donald Trump and Hillary Clinton” with Clinton discussing her e-mail scandal on Meet the Press and Fiorina “defend[ing] what she has said about Planned Parenthood.”

In the first portion of her segment, Welker provided highlights of Clinton’s appearance on NBC’s Sunday morning talk show where she “struggled to explain the discoveries of a string of work e-mails sent on her personal account, earlier than she said she had used the address.”

Shifting over to Fiorina, Welker appropriately mentioned that Fiorina has risen from the bottom tier of candidates to a tie for third place with Senator Marco Rubio (Fl.) behind Donald Trump and Ben Carson.

Turning to bash Fiorina, however, Welker declared that the former businesswoman “continued to stand by her accusations that Planned Parenthood officials were caught on camera keeping a fully formed fetus actual alive to harvest its brain.”

Welker played a clip of Fiorina’s railing against Planned Parenthood in the most recent GOP debate over their baby parts video scandal then proceeded to cite “several” unnamed “fact checkers” in hitting Fiorina for even alluding to them (which the media have shown scant interest in covering): “Several fact checkers have determined Fiorina’s account is not true, noting the video uses doctored and unrelated footage.”

While Welker and “fact checkers” may say that they multiple videos released by the Center for Medical Progress, it’s fair to say that astute conservatives such as The Federalist’s Mollie Hemmingway would beg to differ with their assessments.

After a soundbite of Fiorina and Todd clashing, Welker closed by touting the questions over the GOP candidates time as Hewlett-Packard CEO: “Fiorina also stood by her record as CEO of Hewlett-Packard, which has come under fire because 30,000 people were laid off on her watch. Today, Fiorina said those layoffs were necessary to save the company.”

In contrast, ABC’s World News Tonight had two political stories with weekday anchor David Muir at the helm, but the first largely stayed on the topic of the new 2016 poll and the second being news brief on House Speaker John Boehner’s first live interview on CBS’s Face the Nation after announcing Friday that he will be resigning from Congress on October 30.

While ABC and NBC aired Sunday evening newscasts with their weekday anchors sitting in due to Pope Francis’s visit to Philadelphia, the CBS Evening News was not shown due to a doubleheader day of NFL games on CBS serving as lead-ins to 60 Minutes.

The relevant portions of the transcript from September 27's NBC Nightly News can be found below. 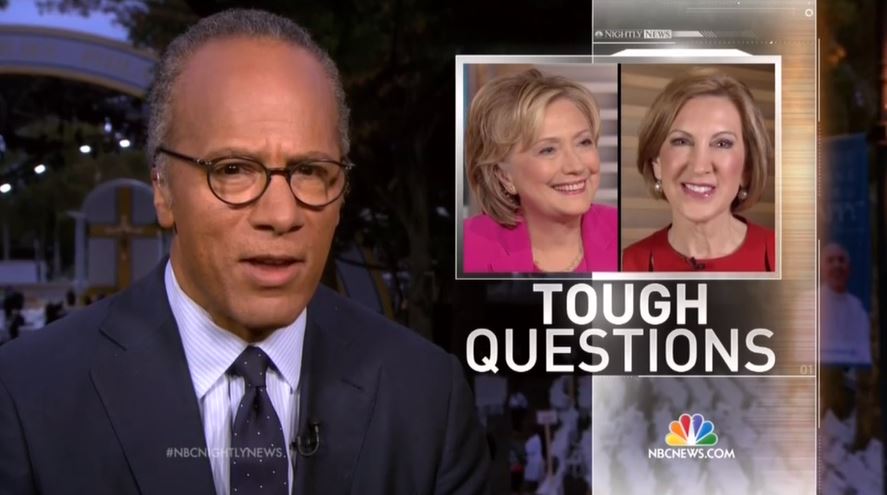 LESTER HOLT: We turn to politics now and our new poll that shows the presidential race tightening for both Donald Trump and Hillary Clinton, as Democrat Clinton spoke at length today about the e-mail issue that continues to follow her in this campaign, and Republican Carly Fiorina defended what she has said about Planned Parenthood. NBC’s Kristin Welker is at the White House to tell us more on all of this. Kristin, good evening.

WELKER: But today, Clinton struggled to explain the discoveries of a string of work e-mails sent on her personal account, earlier than she said she had used the address.

WELKER: Meanwhile, the only other woman in the race, Carly Fiorina, is rising, while the latest poll shows Donald Trump still in the lead on the GOP side, Fiorina has jumped from the bottom rung to third place, tied with Marco Rubio at 11 percent. Today, Fiorina continued to stand by her accusations that Planned Parenthood officials were caught on camera keeping a fully formed fetus actual alive to harvest its brain.

TODD [TO FIORINA]: Are you willing to concede that you exaggerated that scene? 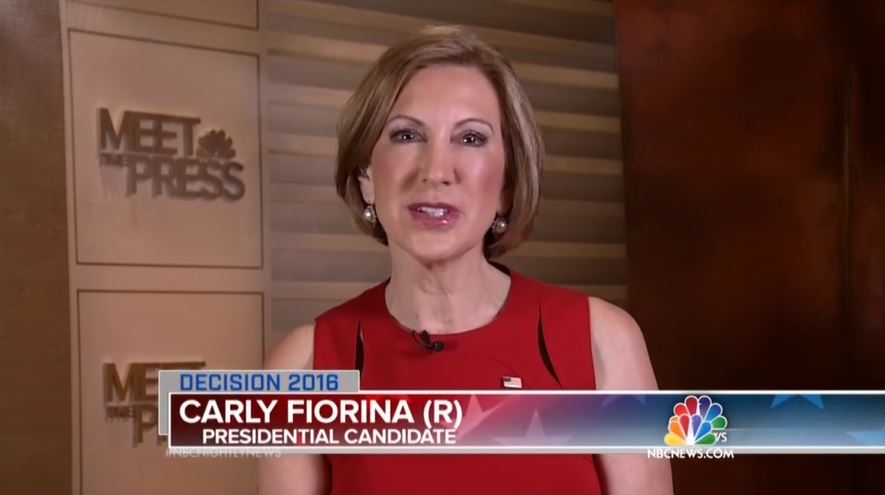 FIORINA: No, not at all. That scene absolutely does exist.

WELKER: Still, Fiorina continues to gain traction, a reversal of fortunes for the two female candidates in this race.

WELKER: Fiorina also stood by her record as CEO of Hewlett-Packard, which has come under fire because 30,000 people were laid off on her watch. Today, Fiorina said those layoffs were necessary to save the company.