The fake book in question had placed a large photo of Lee on the front with Smith on the back cover along with two unidentified women. O’Brien then joked to announcer and sidekick Andy Richter that it’s “very hard to know” to tell the difference.

Before moving onto the next phony book, O’Brien opened his suit jacket and tried to place it inside as he admitted: “This book's a keeper right here.”

Not surprisingly, the liberal feminist group National Organization for Women (NOW) has not issued a statement or tweet condemning O’Brien and his crude joke on two news anchors at Fox (with Lee co-hosting Happening Now and Smith co-hosting Fox Business AM and Outnumbered).

If the joke were pointed at a reporter from, say, MSNBC or was uttered by a conservative comedian, one could bet that NOW would have acted differently.

They did, however, tweet about their opposition to a 20-week abortion ban, decrying the push to defund Planned Parenthood, and retweet Hillary Clinton’s video about supporting women who were sexual assaulted.

The relevant portion of the transcript from September 14's Conan on TBS can be found below. 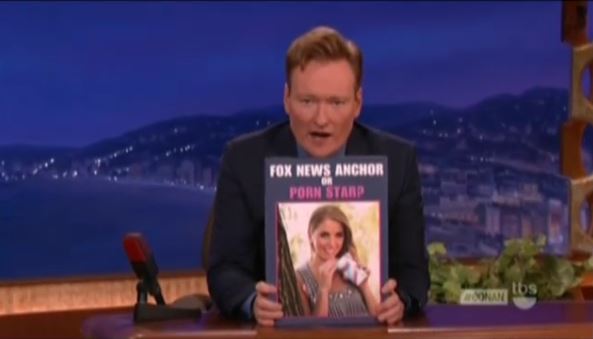