Deeming it not pertinent for their viewership, ABC’s World News Tonight refused to cover on Tuesday night the latest round of Hillary Clinton’s e-mails released by the State Department despite having briefly reported on them on Monday hours before they were actually released.

Joining ABC in their zero coverage of Clinton was Spanish-language network Telemundo (which also failed to mention the scandal on Monday’s Noticiero Telemundo before the e-mails were made public).

On the CBS Evening News, congressional correspondent Nancy Cordes reported on the e-mails findings and made the observation that “[t]he 4,400 e-mails reveal a secretary of state who was deeply engaged in the minutia of diplomacy and fascinated by Washington intrigue.”

To her credit, Cordes found time to highlight how this round included more e-mails from longtime Clinton confidante Sidney Blumenthal who gave Clinton “critiques of D.C. power brokers.” Cordes then admitted to Pelley at the tail end of her report:

The State Department says none of the newly released e-mails contained information that was considered classified at the time that Clinton received it. Intelligence officials aren't so sure, Scott, and they say regardless, that material should not have been sitting on Clinton's home server for years.

Over on NBC Nightly News, Clinton’s e-mails also saw airtime with Clinton correspondent and MSNBC host Andrea Mitchell declaring that the former secretary of state has come “under a barrage of e-mails she never thought would see the light of day.”

In her piece, Mitchell played a clip from her MSNBC show of The Atlantic’s Steve Clemons running defense for the Clintons: “This was an act of defensiveness to try to protect some bit of their terrain from enemies that I think they feel are embedded all around them.”

With the determination that the e-mails “have taken a political toll” on Clinton, Mitchell spent the remainder of her segment elaborating on Clinton ceding ground to opponent and socialist Bernie Sanders in the polls with growing rumors of a presidential bid by Vice President Joe Biden. 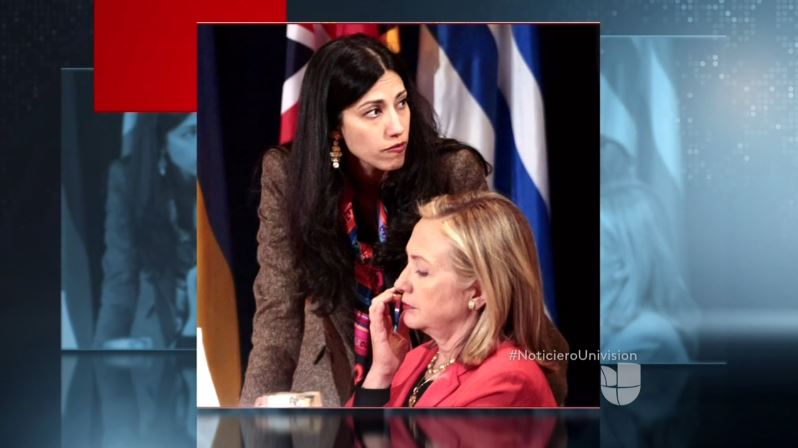 After offering a 25-second news brief on the scandal on Monday night, Univision’s Noticiero Univision ran a full, two-minute-and-22-second report by national correspondent Lourdes Meluza in Washington that included a clip from former Vice President Dick Cheney’s CNN interview in which he slammed Clinton’s conduct and choice to use a private e-mail server.

While World News Tonight skipped Clinton’s e-mails, their morning counterpart Good Morning America had a full report from Martha Raddatz, but offered zero time for “critics” who view the ongoing series of revelations as a “national security scandal.”