The New York Times devoted a 1,700-word story on Friday’s front page to House Speaker Nancy Pelosi stepping down from her Democratic leadership role after Republicans took back the House of Representatives. 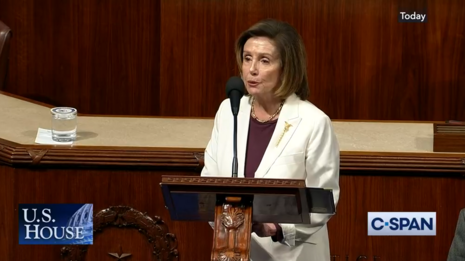 Congressional correspondent Carl Hulse proved his usual unctuous self, touting Pelosi as "the dominant political operator, legislative tactician and face of House Democrats for two decades," and "a central figure in the major legislative accomplishments of the Obama and Biden administrations, disclosed her plans in a carefully choreographed midday speech on the House floor a day after Republicans clinched control of the chamber."

The closest thing to criticism the Times provided was about “the tight grip she has maintained on House Democrats over decades, rarely ceding control to her colleagues, brooking little dissent…”

…Ms. Pelosi insisted she would have had the support to remain if she had opted to; she said her phone had been “exploding” with calls from her colleagues urging her to stay as their leader, but that she had chosen otherwise. The decision came less than three weeks after her husband, Paul Pelosi, was brutally attacked in their San Francisco home by a hammer-wielding assailant who was said to have been planning to kidnap and assault the speaker herself.

….She helped steer the nation through a grave economic crisis in 2008, and this year finished her leadership stint by passing legacy-building climate change legislation.

Over her many years atop her party, Ms. Pelosi, the most powerful woman in American politics, became a favorite target for Republicans, who demonized and dehumanized her in increasingly ugly terms. During her remarks on Thursday in the House chamber, there was standing room only on the Democratic side, but only a few Republicans were on hand to listen to her.

As if liberals never "demonize and dehumanize" their opponents?

Hulse, traditionally eager to provide Democratic spin, let Pelosi rage at the Republican reaction to the hammer attack on her husband Paul Pelosi until the end.

….She said she believed that public disgust at the attack swung voters to Democratic candidates on Nov. 8.

“The traumatic effect of that being in our home has had such an impact on my husband and me, but also on our children and grandchildren,” she said, expressing fury at Republicans and others for making light of the incident.

“Just think if your spouse were in a situation where other people would make a joke of it, think it was funny,” she said. “It’s so horrible to think the Republican Party has come down to this, and no real rejection of it by anybody in the party. It’s so sad for our country.”

Rather than leading her to consider leaving Congress entirely, Ms. Pelosi said the attack had fortified her decision to stay.

“I couldn’t give them that satisfaction,” she said.

Speaking of making light of violence. Pelosi’s daughter Christine Pelosi in 2020 tweeted support for the violent attack on Republican Sen. Rand Paul by an angry liberal neighbor. As Paul reminded people, the younger Pelosi wrote: “Rand Paul’s neighbor was right.” The offensive tweet was apparently deleted by Twitter itself for promoting violence, if the Times’ sole, almost accidental mention of the incident is accurate.