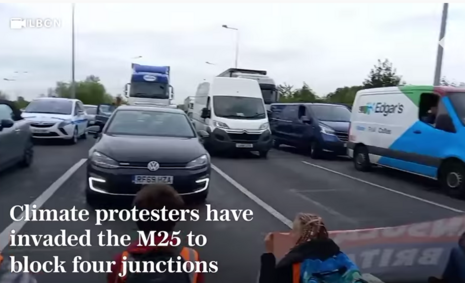 They’ve taken hammers to gas pumps and glued themselves to museum masterpieces and busy roadways. They’ve chained themselves to banks, rushed onto a Grand Prix racetrack and tethered themselves to goal posts as tens of thousands of British soccer fans jeered.

The activists who undertook these worldwide acts of disruption during the last year said that they were desperate to convey the urgency of the climate crisis and that the most effective way to do so was in public, blockading oil terminals and upsetting normal activities.

Can one imagine how the paper would cover a similarly aggressive right-wing protest movement using these tactics? The paper was ideologically repelled even by peaceful protests against vaccine mandates by Canadian truckers.

Here’s Buckley’s punch line: The disruption is being bankrolled by guilt-ridden members of the oil-rich Getty and Rockefeller families.

Buckley was histrionic about the dangers of “climate change.”

So far, the fund has given away just over $7 million, with the goal of pushing society into emergency mode, she said. Even though the United States is on the cusp of enacting historic climate legislation, the bill allows more oil and gas expansion, which scientists say needs to stop immediately to avert planetary catastrophe.

Buckley sympathized with the radicals, then let the eco-nuts compare themselves to an actual hero without rolling her eyes.

Protesters have been screamed at, threatened, labeled eco-zealots and dragged off by angry commuters. Research from the University of Toronto and Stanford University also found that while more disruptive protests attracted publicity, they could undermine a movement’s credibility and alienate potential support.

But Ms. Salamon and activists backed by the Climate Emergency Fund said pushback was inevitable. They pointed to the Rev. Dr. Martin Luther King Jr., who, according to a Gallup Poll, had a 63 percent disapproval rating in the years leading up to his death.

In Saturday’s edition, Lisa Friedman and Coral Davenport unsubtly suggested the “septuagenarian lawmakers” that lead the Democratic party were moving too slow to save the planet: “Climate Bill Heads to Biden’s Desk. There Is More to Be Done.”

….younger Democrats and climate activists crave more. They look at the bill as a down payment, and they worry a complacent electorate will believe Washington has at last solved climate change -- when in fact scientists warn it has only taken the first necessary steps….But scientists say the United States needs to do more. It must stop adding carbon dioxide to the atmosphere by 2050, which the bill won’t achieve.…Even as scientific evidence links climate change to extreme weather that is causing death and destruction in the United States, polls show that the American electorate is divided along partisan lines about the scale of the problem and what to do about it.