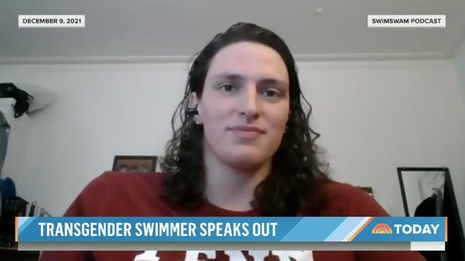 Powell’s 2,700-word deep dive (ahem) opened with a vignette on the pressure felt by female athletes on progressive college campuses like Princeton to stay silent as their turf is invaded by men in the name of tolerance. It’s a dilemma for feminists, and Powell drew out the conflicts.

The women on the Princeton University swim team spoke of collective frustration edging into anger. They had watched Lia Thomas, a transgender woman who swam for the University of Pennsylvania, win meet after meet, beating Olympians and breaking records.

The swimmers, several of whom described the private meeting on condition of anonymity, detailed the biological advantages possessed by transgender female athletes. To ignore these, they said, “was to undermine a half-century fight for female equality in sport.”

Powell noted the pressure on women to keep quiet.

The rancor stifles dialogue. At meets, Ms. Thomas has been met by stony silence and muffled boos. College female athletes who speak of frustration and competitive disadvantage are labeled by some trans activists as transphobes and bigots, and are reluctant to talk for fear of being attacked.

Some trans activists try to silence critics, whom they derisively call TERFs, which stands for trans-exclusionary radical feminists. A spokeswoman for a gay rights group urged a reporter not to “platform” -- that is not to quote -- those she said held objectionable views, including Martina Navratilova, the retired tennis legend, a champion of liberal and lesbian causes. Ms. Navratilova argues that transgender female athletes possess insurmountable biological advantages.

Interestingly enough, by Powell’s definition the New York Times itself is also “trans activist.” The paper also used the “TERF” slur against Harry Potter creator J.K. Rowling in the metadata of a news story. The original URL link at the top of an unflattering June 2020 story (https://www.nytimes.com/2020/06/07/arts/jk-rowling-terf-transphobic.html) on Rowling actually contained the derogatory acronym. The original URL, preserved above, also included the insult “transphobic.”

There was no excuse for using the term, as “TERF” doesn’t appear in the actual story text. Someone evidently had second thoughts about the personal slur against Rowling; the link now resolves into a more conventional URL.

Powell provided examples of extremist transgender activists being unreasonable and intolerant both online and in real life, a facet of the debate not often raised in the mainstream press, which poses the entire movement as driven by kindness and tolerance.

Powell also included a crash course in biology, another subject strangely absent from most media coverage.

The records for elite adult male swimmers are on average 10 percent to 12 percent faster than the records of elite female swimmers, an advantage that has held for decades.

Little mystery attends to this. Beginning in the womb, men are bathed in testosterone and puberty accelerates that. Men on average have broader shoulders, bigger hands and longer torsos, and greater lung and heart capacity….

He even recounted how Thomas, who ranked low in men’s swimming, shot up into the top 10 nationwide when he started entering women’s swim meets. One example: “….she ranked 65th in the men’s 500-yard freestyle but won the title as a female.”