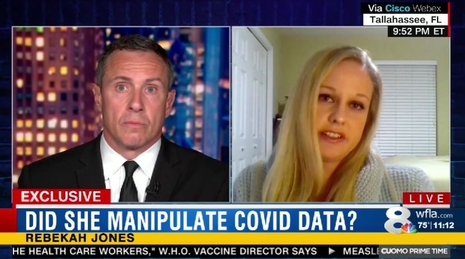 Jones is not a scientist, as some press coverage stated, but a data mapper with a master’s degree in geography. She is also a conspiracy theorist hyped in the press, appearing as a DeSantis basher on CNN with disgraced former host Chris Cuomo, and hailed by lefty host Joy Reid on MSNBC.

But perhaps most disappointing was Jones’ hagiographic treatment in the news pages of the Miami Herald, where investigative reporter Sarah Blaskey in particular wrote provocative articles in support of Jones, while minimizing the disturbing charges of Jones cyberstalking a former boyfriend, and other run-ins with the law.

The trouble began in May 2020, after Jones claimed she was censored by the Florida Department of Health. The Herald, critical of DeSantis’s policy to reopen the state for business and life, eagerly criticized the governor for supposedly withholding death data.

Jones was fired by DeSantis for insubordination, but the Herald continued to cover her bizarre tales of the state manipulating COVID data.

More hagiography came in May 2021, when Jones qualified for “whistleblower status.” Blaskey blasted her Republican opponents and treated her as a Cassandra.

Jones first went on national television last May after Gov. Ron DeSantis slammed her to the press while standing next to former Vice President Mike Pence. DeSantis ignored her concerns and instead questioned her credentials.

Her trumped-up “whistleblower” triumph was accompanied by a harrumphing Herald editorial:

Unfortunately, the possibility of [the Department of Health] manipulating information is not a stretch.

But the most egregious coverage arrived June 4, 2021, in a 5,000-word story by Blaskey: “What whistleblower case reveals about Florida’s COVID response.” Blaskey began after Jones’ house was raided for evidence of illegally accessing a state messaging app.

The raid, at least in Jones’ mind, represented a dramatic escalation in her public dispute with the Florida governor. The months-long feud she said she never wanted or expected transformed her from an anonymous public servant in the information technology department into either a beacon of science and truth or an attention-seeking grifter, depending on whom you ask.

Sworn affidavits from DOH leaders acknowledge Jones’ often-denied claim that she was told to remove data from public access after questions from the Miami Herald.

(Data removed out of privacy concerns and soon restored.)

With 5,000 words, Blaskey couldn’t ignore all the negatives, but gave her subject the benefit of the doubt: reckless, but not a liar.

Any mistake, large or small, real or perceived, is red meat for those calling her a fraud.

This sounds ludicrous in retrospect:

Screenshots from almost a year of sporadic conversation on Twitter and Signal show an unlikely alliance born from a shared passion for public service and emergency ….

Moskowitz, the former head of Florida’s Division of Emergency Management, is a Democratic politician, so his alliance with Jones isn’t a surprise.

Whether or not she was right for the job, Moskowitz told the Herald he recognized Jones was the most trusted source of COVID-19 information for many terrified Floridians, who clung to her every word and tweeted suspicion as gospel.