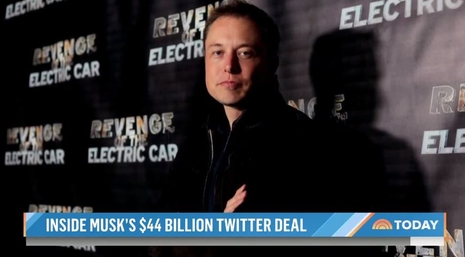 The New York Times held its fire against Elon Musk during the will-he-or-won’t-he  drama over the entrepreneurial billionaire’s potential purchase of Twitter, the social media “town square” that has throttled conservative opinion in the name of squelching “hate speech” and “disinformation.”

(Never mind that such “disinformation” with time often becomes conventional wisdom, such as the once-heretical idea that cloth masks don’t stop Covid.)

But.now that Musk has officially purchased Twitter, the hysterical takes are flowing.

Shira Ovide’s “On Tech” column on the front page stamped free speech as a problem, as captured in the subhead: “New Gatekeeper, Same Issue: Balancing Freedom and Harm.” A photo caption under a picture of Musk: “Elon Musk hasn’t yet had to tackle the difficult decisions in which giving one person a voice may silence the expression of others.”

A decade ago, Twitter executives, including the chief executive, Dick Costolo, declared that the social media site was the “free-speech wing of the free-speech party.” The stance meant Twitter would defend people’s ability to post whatever they wished and be heard by the world.

Since then, Twitter has been dragged into morasses over disinformation peddlers, governments’ abuse of social media to incite ethnic violence and threats by elected officials to imprison employees over tweets they didn’t like. Like Facebook, YouTube and other internet companies, Twitter was forced to morph from hard-liner on free expression to speech nanny.

The past 10 years have seen repeated confrontations between the high-minded principles of Silicon Valley’s founding generation of social media companies and the messy reality of a world in which “free speech” means different things to different people….

Some pretty tepid defenses of speech were offered by Ovide, a journalist who depends on the principle of free inquiry for her livelihood.

Almost no place on the internet or in the physical world is a zone of absolute free expression. The challenge of online expression is the challenge of expression, period, with questions that have few simple answers: When is more speech better, and when is it worse? And who gets to decide?

For her, kicking President Donald Trump off social media after the Capitol Riot of January 6 was

…a crossing-the-Rubicon moment when the “tweets must flow” crowd acknowledged that it could and should do more to prevent people from using its internet properties to blare information that could mislead or harm others.

Mr. Musk himself has had a rocky relationship with online speech. This year, he tried to quash a Twitter account that tracked his private jet, citing personal and safety reasons. And he has gotten into trouble with regulators over his tweets.

….Mr. Musk also has fans among Twitter’s rank-and-file, and some employees have welcomed his bid….other employees have argued in internal messages seen by The Times that their co-workers have shifted too far to the left side of the political spectrum, making employees who support Mr. Musk’s plans too uncomfortable to speak up….