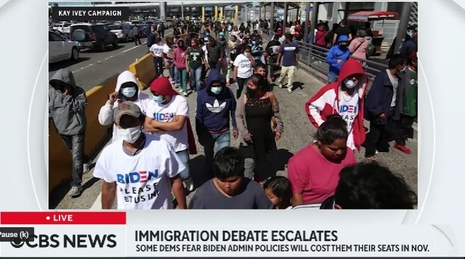 The New York Times knows the Democrats are in trouble, and they’re getting frantic. A front-page story on Friday, “G.O.P. Memo Shows Plan to Attack Democrats on Immigration,” was based on a leaked document distributed to House Republicans. The reporters seized on it to play defense attorney for the Democrats, trying to refute every piece of the memo on the party’s behalf.

Reporters Annie Karni and Luke Broadwater tried to squelch the “misleading…talking points” of Republicans -- without actually detailing the “misleading” parts. They seemed worried the document might hurt the feelings of illegal immigrants.

The detailed, 60-page guidance memo includes misleading and provocative talking points that seek to portray migrants and refugees as perpetrators of gruesome crimes, especially those involving sexual assault, echoing the language that former President Donald J. Trump used to denigrate immigrants. It also argues that the Biden administration has been lax on illegal immigration, seeking to put Democrats on the defensive on the issue.

It comes as Democrats are growing increasingly concerned that President Biden’s immigration policies, including the recent decision to lift pandemic-era border restrictions next month, could pose a political liability for them ahead of the midterm elections.

The memo -- which is marked “CONFIDENTIAL -- FOR INTERNAL USE ONLY” -- repeatedly insinuates that immigrants could be sex offenders, highlighting a handful of arrests at the southwestern border and of Afghan evacuees. It also misrepresents a Biden administration policy designed to humanely enforce immigration laws as one that would bar law enforcement from surveilling sex offenders near schoolyards.

They apparently mean this Department of Homeland Security guidance that, according to the Center for Immigration Studies, declares that federal law enforcement is largely prohibited from conducting immigration enforcement near certain locations, including near any “place where children gather” such as a playground or recreational center.

The reporters fretted about Republicans instilling “fear” into the electorate – a bit like what the Times has done with COVID for two years?

But Republicans have continued to hammer on an issue that not only instills fear but has the added appeal for them of causing a split within the Democratic Party. According to Mr. Jordan’s memo, he plans to accuse the administration of prioritizing “illegal aliens over American citizens” by ending Title 42.

Karni and Broadwater were unable to make the obvious distinctions between war refugees flying in from Ukraine and random people crossing the southern border.

But Mr. Jordan’s document shows why such discussions have gone nowhere in Congress. It suggests that just months after Republicans joined Democrats in pushing for legislation to help rush to the United States thousands of Afghans who were facing retribution for having helped American troops, the G.O.P. is demonizing such refugees.

Before chastising Republicans for “demonizing” refugees, the paper sympathized with Democrats for its failed push for “democracy” in voting on Thursday’s front page. Reporters Reid Epstein and Jonathan Weisman reported under the petulant headline "If Democracy’s in Trouble, Why Don’t Democrats Run on the Issue?" Showing their inability to be offended by even the most extreme Democratic rhetoric, they characterized a particularly noxious Biden statement as “soaring” rhetoric.

Some Democrats have tried to make voting rights a leading issue in the United States….In January, as Mr. Biden pushed for the same goal, he gave a soaring speech in Atlanta comparing today’s Republicans to George Wallace and Bull Connor, villains of the civil rights era.

Yes, so inspiring to describe your political opponents as violent racists.