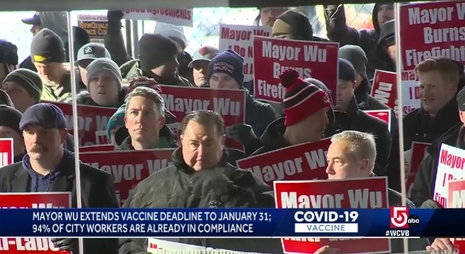 The hypocritical New York Times refuses to fairly cover conservative protests against mask and vaccine mandates and other overzealous pandemic restrictions, and continues to smear mandate protesters as extremist disruptors, as in this recent post: “Mandates are ending in the U.S., but protests outside officials’ homes continue."

Alyssa Lukpat, a “reporting fellow” and breaking news reporter at the paper, sounded judgmental in her April 1 story, which focused on Democratic Mayor Michelle Wu of Boston, whose vaccine mandates have raised the ire of the firefighters union, among others.

Many pandemic restrictions in the United States and Canada have been relaxed, but that has not stopped protesters from gathering outside some government officials’ homes and badgering them.

Though vaccination and masking rules have generally eased in the last few months, protests have continued outside officials’ residences in Massachusetts and other places in the United States, and in Nova Scotia and Alberta in Canada. Demonstrators have disrupted traffic, disturbed neighbors and, in some cases, targeted officials with racist and sexist language.

It’s far from the soft-soap Times reporters applied to actually violent BLM protests in the summer of 2020. Historically, the paper has never shown much concern for the threats, protests, and actual violence committed by leftwing protesters against conservative politicians and public figures.

Has the Times ever reported on liberal protesters disrupting traffic or disturbing neighbors, or their use of ugly or threatening language against opponents? It's uncommon.

Protesters have targeted the mayor of Boston, Michelle Wu, since she took office in November. Many of them oppose her vaccination requirements for city workers and some people in indoor settings, although one of the mandates has been held up by a court ruling. They have pestered her for weeks outside her home, calling her “Hitler” and shouting at her children that she was going to prison, she said on Twitter in January.

It's galling for the Times to call out one kind of demonstrator when it has spent the last few years celebrating leftist protests, even those that descend into violence, as well as, yes, harassing conservative politicians outside their home. Republican Sen. Rand Paul has become a particular target by violent liberals, with little sympathy from the Times.

The paper has always downplayed the 2017 shooting by a Bernie Sanders supporter of Republican Rep. Steve Scalise and other Republican congressmen on a Northern Virginia ballfield. Multiple cases of lefty harassment of centrist Democrat Sen. Kyrsten Sinema of Arizona were ignored. Senate Minority Leader Mitch McConnell and South Carolina Sen. Lindsey Graham, both Republicans, faced sometimes disgusting and frightening protests outside their homes, but the paper didn’t insult the mob as extremist.

In June 2019 the paper even got into the game itself, running an op-ed by U.K. professor Kate Cronin-Furman calling for the “doxxing” – defined as revealing personal information on private citizens for the purpose of targeted harassment -- of U.S. Customs and Border Protection Agents.

Now, the paper is fretting about a peaceful rally outside the homes of an elected Democrat. Pathetic.