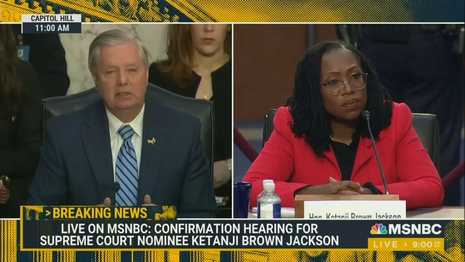 In its coverage of Biden’s first Supreme Court nominee, the New York Times has shown some progress on one front of fairness: It is willing to sometimes label Judge Ketanji Brown Jackson a liberal. The paper’s historical pattern of stark labeling disparity between “liberal” Democratic Supreme Court nominees and “conservative” Republican ones.

But as Senate hearings continued into Day Two on Capitol Hill on Tuesday, the Times has rediscovered its tired template: Defending Democratic nominees and criticizing Republicans on the Senate Judiciary Committee.

Times congressional reporter Carl Hulse set the scene Monday by hailing Jackson and suggesting she was untouchable because of her race:

Republicans have conceded it is a sensitive situation, considering that her confirmation is likely and they are loath to be seen as piling on against a woman of color with a gold-plated legal résumé and a reputation as a solid jurist.

Reporter Katie Rogers, after offering a back-handed compliment to early flashes of gentility by Republicans, quickly reverted to the template of an unfairly put-upon Democratic nominee suffering unfair questioning from Republicans:

But that tone quickly receded as Republicans stressed that they would not personally attack Judge Jackson, while in the same breath accusing her of being lenient on child sexual abuse defendants and sex offenders. Several also suggested, without evidence, that she was aligned with progressive groups that are interested in adding justices to the Supreme Court.

In an apparent effort to justify tough lines of questioning in the coming days, several Republicans, including Mr. Graham, seized on the explosive confirmation hearings of Justice Brett M. Kavanaugh in 2018 as an example of unfair treatment of a Supreme Court nominee, asserting that Judge Jackson was already being afforded more respect and could expect a more civil tone in four days of hearings this week.

Rogers couldn’t defend Kavanaugh’s treatment by Democrats, so she resorted to weak whataboutism:

He made no mention of the fight over President Barack Obama’s nomination of Merrick B. Garland in 2016. Republicans refused to even grant him a hearing, waiting to see who would win the presidential election.

So by liberal standards of “cancel culture” denial, Garland was unharmed, since he eventually landed in an excellent position?

Annie Karni's story on Tuesday, “G.O.P. Questions to Judge Jackson Give Preview of November Attack Lines,” was partisan in painting the GOP as brutal partisans.

As they begin questioning Judge Ketanji Brown Jackson on Tuesday, Republican senators are previewing many of the attack lines their party plans to use in the midterm congressional elections to portray Democrats as extremists.

The televised hearings serve as a high-profile opportunity for Republicans to air cultural grievances that motivate their hard-right base, such as antiracism efforts and transgender rights, as they work to tarnish Judge Jackson in the eyes of the public and generate enthusiasm among voters outraged at her likely elevation to the court.

In a release on Monday morning, just as the hearings were beginning, the Republican National Committee painted Judge Jackson as a radical left-wing activist and proselytizer of critical race theory. The term refers to a field of legal study that examines how racism can be embedded in laws and institutions, but has been appropriated by the right as a way to disparagingly describe any discussion of structural racism.

Karni was also partisan in her coverage of live hearings Tuesday.

12:29 p.m.: Many of these white, male Republican senators seem to be aware of the optics of grilling a Black woman and are going out of their way to note how gracious, informed and charming they have found her to be personally. Then they launch into partisan attacks that seek to present her as an extremist.