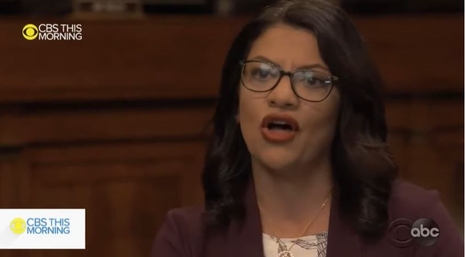 The upcoming issue of the New York Times Sunday magazine features “What Rashida Tlaib Represents.” The author Rozina Ali is working on a book about the history of “Islamophobia” in the United States, so it’s no surprise she produced a long (5,000 words), extremely sympathetic profile of the left-wing “Squad” member Rep. Rashida Tlaib, while accusing her pro-Israel critics of viciousness. (It’s a habit at the Times to defend Tlaib and fellow “Squad” member Rep. Ilhan Omar.)

Last May, following protests in East Jerusalem over planned evictions of Palestinians, Hamas started firing rockets toward Tel Aviv, and Israeli airstrikes pounded residential buildings in the Gaza Strip. Shortly after, a group of nine Democratic lawmakers, all longstanding Israel supporters, took to the floor of the U.S. House of Representatives to reaffirm the country’s right to defend itself. “We have a duty as Americans to stand by the side of Israel in the face of attacks from terrorists,” Elaine Luria, a representative from Virginia, said, “who again, have the same goal in mind: to kill Jews.”

Later that evening, about a dozen other Democrats spoke as well -- to question the justice of funneling almost $4 billion a year to a country that was in the midst of bombing civilians. “Do Palestinians have a right to survive?” Alexandria Ocasio-Cortez, the New York Democrat, said. “Do we believe that? And, if so, we have a responsibility to that as well.”

Tlaib has been criticized, sometimes viciously, by Republicans and pro-Israel Democrats for calling Israel an “apartheid regime,” and for her support of the Boycott, Divestment and Sanctions movement, which aims to end military occupation by exerting economic pressure on Israel. She has been called anti-Semitic for her criticism of Israeli policies, and has become a favored quarry of Fox News….

But Tlaib’s arrival on the national stage has also coincided with an opening, albeit a small one, within the Democratic Party to challenge the United States’ Israel policy….

When she and the Somalia-born [Rep. Ilhan] Omar were elected that November, they became the first Muslim women in the House. “I guess I was naïve,” Tlaib told me, “in not understanding how bipartisan Islamophobia is in Congress.” It was the subtle things, she said: colleagues shocked to know that most American Muslims are Black, or stereotypes of Muslim women being submissive. One colleague approached Omar and touched her hijab. Besides ignorance, Tlaib said, “I think there’s a tremendous amount of fear.”

Beginning the Israel-Palestinian story in 2014 allows Ali to mostly leave off the long pattern of Palestinian suicide bombings and terrorism within Israel.

The beginning of this shift roughly coincides with the resumption of the active conflict in 2014, when Israel launched a major military operation in the Gaza Strip after the kidnapping and murder of several Israeli teenagers by the Hamas militant organization….

When Tlaib argued against providing Israel money for its “Iron Dome” program to protect itself from Palestinian rockets, and called Israel an “apartheid regime,” Ali personally commiserated.

Afterward, Tlaib told me, her colleagues “whispered, ‘Are you OK?’ The whispering needs to stop,” she said, “and they need to speak up and say, ‘That was wrong.’” [Rep.] Hoyer told me he didn’t consider Tlaib’s remarks anti-Semitic, but thought they were “harsher than they needed to be.”