After its smear-filled coverage of the Canadian truckers’ protest over anti-vaccine mandates, now shuttered by Prime Minister Justin Trudeau’s authoritarian government, The New York Times is stoking fears of similar protests in the United States and New Zealand.

“A Truck Caravan With Far-Right Links Heads to Washington, D.C.,” Shawn Hubler and Alan Feuer reported from California for Thursday’s edition. Typically, the reporters characterized right-leaning protests as conspiratorial, not organic. The American truckers certainly didn’t get the soft Black Lives Matter treatment for their own protest: 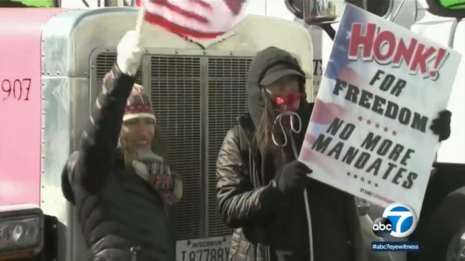 Though it was billed as a grass-roots, nonpartisan event intended to oppose government Covid-19 mandates, a trucker demonstration that left California for Washington, D.C., on Wednesday appeared to be tightly aligned with far-right organizations and activists.

Many of those behind the demonstration, which was planned as an American version of the past month’s chaotic Canadian protest, have connections to the violent attack on the Capitol in January 2021, or supported the lie that fraud in the 2020 presidential election was to blame for Donald J. Trump’s loss.

An American trucker protest has been discussed for at least a month on social media and right-wing news outlets, inspired by the one that crossed Canada, demanding an end to a mandate requiring truckers crossing the U.S.-Canada border to get vaccinated against Covid-19.

This was typical Times guilt by association:

Yet another group, the American Foundation for Civil Liberties and Freedom, which is raising money for the truckers, hosted an event in Los Angeles last summer at which participants promoted baseless claims that there were widespread irregularities in the presidential voting results in Michigan.

Times reporter Pete McKenzie got into the act from New Zealand. The online headline deck revealed the hysterical slant:

New Zealand Protest, an Echo of Canada’s, Digs In and Turns Ugly

An occupation in the capital demonstrates the dangerous influence that American disinformation is having on otherwise stable democracies.

Apparently, protests destabilize democracies when they're against Democrats (click "expand"):

The antigovernment protests that jolted Canada have been quashed. But 9,000 miles away, in the capital of another Western democracy largely unaccustomed to violent tears in the social fabric, an occupation on the grounds of Parliament has entrenched itself and turned increasingly ominous.

Hundreds of demonstrators opposed to New Zealand’s Covid-19 vaccine mandate are in their third week of encampment in Wellington, erecting tents, illegally parking vehicles and establishing communal kitchens and toilets in a deliberate echo of the Canadian siege.

Initially, the New Zealand occupation had a carnival atmosphere, with a popcorn stand and a doughnut truck and a number of children brought in by their parents….

In recent days, however, after the police moved to evict some protesters, the demonstration has grown more violent….

Anti-government protests are no longer noble at The Times, but “dangerous,” at least when they target left-wing governments overseas:

While the protesters represent a tiny minority of New Zealanders, the division is notable in a country that has been lauded for its highly effective response to Covid-19. The escalating words and violence, experts say, demonstrate the dangerous influence that exported American disinformation is having on otherwise stable democracies around the world.