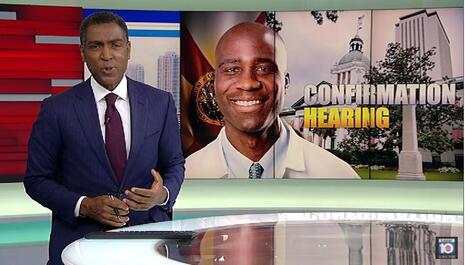 Another day, another hostile New York Times profile of a scientist, Dr. Joseph Ladapo, who doesn’t buy into COVID-hysteria. As a bonus, Ladapo is the newly confirmed Surgeon General of the state of Florida, home of the Times’ least-favorite governor, Republican Ron DeSantis, who reopened the state ahead of blue states, while keeping cases and deaths within bounds.

Miami bureau chief Patricia Mazzei tried to put the doctor on the defensive in “The Doctor Giving DeSantis’s Pandemic Policies a Seal of Approval.”

Dr. Joseph A. Ladapo has come out strongly against mask mandates and lockdowns, only supports vaccination campaigns if the shots are voluntary and will not say whether he himself has been vaccinated.

Ladapo, who is black, immigrated from Nigeria as a child, but that background didn’t give him the usual politically correct amnesty from Times criticism for being guilty of wrong-think on Covid. The paper, usually hypersensitive to identifying People of Color, didn't even mention it. Just an innocent oversight, surely.

For a Republican governor whose brash opposition to conventional public health wisdom has helped fuel obvious presidential ambitions, the appointment of Dr. Ladapo signals Mr. DeSantis’s determination to continue powering through a pandemic that has already cost 68,000 lives in Florida -- this time, with what the governor can claim is a medical seal of approval.

Florida ranks among the 20 worst states for its pandemic death rate and among the 12 worst for its case rate, but Mr. DeSantis has argued that the state also suffers when its economy and schools are restricted.

Even given that incredibly broad measure of Florida being in the “20 worst states,” out of 50, the paper’s own figures put Florida’s performance ahead of blue states New Jersey, Michigan, and Massachusetts. Florida also has the most senior citizens, the segment most vulnerable to the virus, as a percentage of population.

Mazzei also had to hedge her condemnation, given that excessive, anti-scientific liberal mandates have quickly begun to evaporate even in blue states, though she tried to cover the retreat.

Some of Dr. Ladapo’s positions, like his opposition to lockdowns and mask-wearing in schools, have been conservative stances for some time and are beginning to be accepted by liberal leaders now that more people are vaccinated and cases are plummeting. But these views were relatively rare among physicians in charge of public health policy at the time he was espousing them.

So, Ladapo was ahead of the curve? The nitpicking continued.

Though Dr. Ladapo has acknowledged that vaccines are highly effective at preventing hospitalization and death, he said in October that “adverse reactions” to vaccines should receive more attention and urged people to “stick with their intuition and their sensibilities.”

Mazzei buried deep the inconvenient fact that for all DeSantis’s supposed anti-vax posing, Florida’s vaccination rate is slightly above the national average.

About 66 percent of Floridians are fully vaccinated, compared with 64 percent of all Americans, but the state ranks lower than average when it comes to booster shots. Mr. DeSantis will not say if he has gotten boosted, even after Mr. Trump seemed to swipe at him, calling politicians who would not reveal their full vaccination history “gutless.”

Physicians have been disheartened at the lack of support to improve vaccination rates among vulnerable communities.