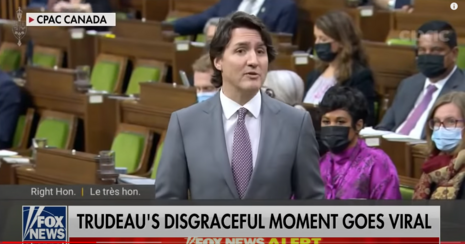 The New York Times continues to smear the Canadian trucker protest against vaccine mandates as crazed angry haters, treatment that is nearly 180 degrees from the sympathetic tone it took with Black Lives Matter and Antifa protests turned riots fueled by George Floyd’s killing at the hands of police in the summer of 2020.

As usual, right-leaning protests are characterized as well-organized and conspiratorial, not as organic.

....High above the clot of trucks on Ottawa’s Parliament Hill, in hotel rooms just out of the fray, are the war rooms behind the operation. From them, a team of self-appointed leaders, some with military and right-wing organizing backgrounds, have orchestrated a disciplined and highly coordinated occupation.

Did the Times ever simply neutrally broadcast conservative views that BLM was a dangerous threat” to overthrow the government?

Canadian officials, who do not have authority to tell the police how to operate, have become increasingly frustrated with the occupation and see the coordination not as a polished demonstration, but a dangerous threat.

“What is driving this movement is a very small, organized group that is driven by an ideology to overthrow the government,” Marco Mendicino, the public safety minister, said in remarks on Tuesday. “Through whatever means they may wish to use.”

Peter Sloly, the police chief, resigned a day after Mr. Trudeau took the rare step of declaring a national public order emergency that extended more robust policing measures across the country. His invocation of the Emergencies Act also took aim at both protester fund-raising, which has been deemed a criminal activity, and the demonstrators’ personal and business bank accounts.

The most slanted paragraph portrayed everyone at the protest as a deranged wacko:

The new public order threatens to unravel a group already at pains to project credibility. Its underpinnings -- as a hodgepodge of people suffused in counterfactual belief systems, conspiracy theories and barely bridled rage at anything seen as contrary to their mission -- frequently erupt through the official veneer.

Nice detail about the coughing!

At a news conference in the Sheraton Ottawa Hotel on Monday, opened to media other than solely conservative-leaning news outlets for one of the first times, there was an air of gravitas in a room that echoed with the constant coughing of dozens of maskless supporters.

When bringing up another detail of Canadian Prime Minister Justin Trudeau’s authoritarian response to the protests, the reporters seemed more concerned about how the protesters were operating with “impunity.”

The protesters’ coordinated responses seek to outfox law enforcement. After the police threatened to arrest people refueling the trucks last week, demonstrators filled red and yellow jerrycans with water to provide cover to those who were in fact supplying gasoline.

Again, this tone of aggrieved contempt for the vaccine protesters is the virtual opposite of the reverent treatment given to BLM protests in 2020, even after many protests devolved into looting and rioting and burning of buildings, which hasn't happened in Canada.