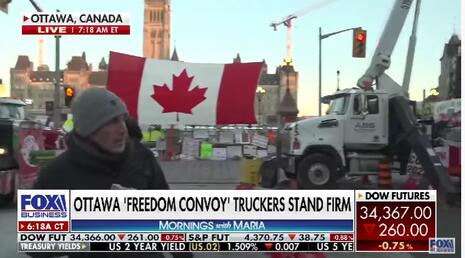 Where were the police during the Canadian truckers protest against vaccine mandates? That’s what the hypocritical media is suddenly demanding, now from the front page of Sunday’s New York Times: “Ottawa’s Police Reacted Slowly As Protest Built.” The online headline: “In Ottawa Trucker Protests, a Pressing Question: Where Were the Police?” (Black Lives Matters protesters in the U.S. were apparently unavailable for comment.)

Canada bureau chief Catherine Porter initially muted her disapproval of the protests, neutrally describing the fun being had:

Steps from Canada’s Parliament buildings, a sprawling festival erupted on Saturday. D.J.s played music for crowds dancing at intersections, singers belted out songs from an improvised stage and protesters’ trucks still blocked the streets, blowing their horns to cheers

The paper didn’t mind dancing in the streets during the George Floyd protests of summer 2020, a time most Americans had to strictly limit significant gatherings like weddings and funerals:

The few police in sight were quickly swallowed up in overwhelming crowds of people, both protesting government pandemic regulations and enjoying the party atmosphere after almost two years of intermittent lockdowns.

Then judgment came down, complete with a hysterical local official (with they/them pronouns, naturally) comparing the peaceful protest to January 6, or worse:

Two weeks after Ottawa’s downtown was transformed into a raging tailgate party, many in Canada wonder how this happened -- why the police seemingly abandoned the country’s seat of power, with no perceivable backup, and how a motley group of truckers, anti-government activists, anti-vaccine agitators and people just fed up after two years of stringent public health restrictions have managed not only to outfox them, but to become increasingly entrenched and to spread elsewhere.

“This is Jan. 6 in slow motion,” said Catherine McKenney, an Ottawa city councilor, who uses the pronouns they/them, referring to the Jan. 6, 2021, mob assault on the United States Capitol. Mx. Kenney has been bellowing for more police protection for the city’s residents downtown, who feel terrorized by pickup trucks that circle through, delivering supplies to the parked trucks. “But on Jan. 7, 2021, Washington emptied out,” the councilor said. “Here, they stayed.”

Porter betrayed grudging respect for the truckers' tactics, based on inside knowledge and experience:

While the trucks themselves are the purported cause, symbol and tool of the protest, only a few of the self-proclaimed leaders are actually truckers. Some are, in fact, former police officers and army veterans who many believe have used their expertise to help organize the occupation.

A follow-up on Monday’s front page by Sarah Maslin Nir reporting the reopening of a bridge blockaded by protesters under the online headline “Canada Opens Blockaded Bridge, but in Ottawa, Truckers Won’t Budge.” The tone here was also strangely pro-police from a newspaper that’s spent over a year excoriating American police power, even in the face of deadly rioting and burning buildings:

Canadian law enforcement officials said Sunday that they had reopened a major international bridge that protesters had been blockading for almost a week....

As they announced that the Ambassador Bridge, which ties Windsor, Ontario, to Detroit, had been reclaimed after a series of arrests in the morning, some hailed it as a victory for a government shaken by the intransigence of anti-vaccine mandate protests that have mushroomed since they began.

But in Canada’s capital, Ottawa, hundreds of truckers were entering their third week of occupation of the area around Parliament Hill, where they appeared to be emboldened by a growing sense of impunity.