NY Times’ Latest Assault on Rival Joe Rogan: Stop Him, ‘Our Health Is at Risk’ 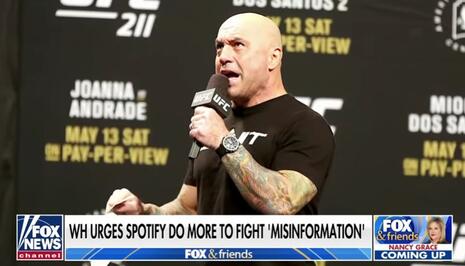 New York Times editorial board member Greg Bensinger called for the massively popular podcaster Joe Rogan to be censored by his hosting platform Spotify in “Spotify Chooses Profits Over Truth.”

Writing in Sunday’s edition, Bensinger achieved an impressive amount of self-righteous indignation over a podcast interviewer (and Times competitor, given his 11 million regular listeners on Spotify):

The streaming service Spotify would like us to believe it is grappling with profound matters of free speech and censorship as it faces mounting pressure over repeated Covid disinformation from its star podcaster, Joe Rogan.

But there’s a far simpler explanation -- it’s about the money. And the listening public is the one paying the price.

In recent days several well-known musicians have protested Spotify’s enormously popular podcast “The Joe Rogan Experience,” in which Mr. Rogan has, among other things, irresponsibly promoted ivermectin, used to treat parasitic infections, as a Covid treatment, and protested vaccine requirements….

After hundreds of medical experts signed an open letter to Spotify denouncing such disinformation, the singer Neil Young issued an ultimatum to Spotify: “They can have Neil Young or Rogan. Not both.” Joni Mitchell soon followed….

Rather than give in to critics, Spotify has held its ground and, in recent days, most of Mr. Young’s and Ms. Mitchell’s music has been pulled from its library. The service said suppressing or editing Mr. Rogan’s podcast would amount to censorship -- but anyone who’s paid attention to online content moderation knows that’s a charade….

(Incidentally: Hippie-at-large Neil Young has written a bunch of silly lyrics over the years, like this from his 2015 album called (not kidding) The Monsanto Years: “Don't say that Citizens United has killed democracy…Don't say pesticides are causing autistic children...” Misinformation, anyone?)

In a Sunday blog post that did not include any mention of Mr. Rogan or his podcast, Spotify’s chief executive, Daniel Ek, appears to take a strong stance against violations of the service’s rules. Still, he resisted calls to take more muscular action….

Mr. Ek’s blog post laid out the company’s rules of the road, but Spotify knew exactly who Mr. Rogan was when it signed its exclusive deal with him nearly two years ago. Before reaching the deal, Mr. Rogan had belittled transgender people, given airtime to Alex Jones and once likened a movie theater in a predominantly Black neighborhood as akin to “Planet of the Apes.”

The paper’s liberal Rogan-loathing aside, it’s rather nervy for the Times to call so fiercely for a rival outlet to be dropped for misinformation, given that the newspaper (in fact, the paper’s editorial board) is being sued for libel by former vice-presidential candidate Sarah Palin for falsely claiming she incited assassin Jared Lee Loughner, who tried to kill Rep. Gabby Giffords of Arizona and killed five others.

Again, the Times called on pop singer Taylor Swift to save the world from Rogan.

Where the rubber meets the road for Spotify is a market backlash, a principled stance from bigger names like Taylor Swift, as some have suggested, or a slew of artists, not the trickle we’ve seen so far. So, for now, Mr. Rogan is untouchable and our health is at risk.