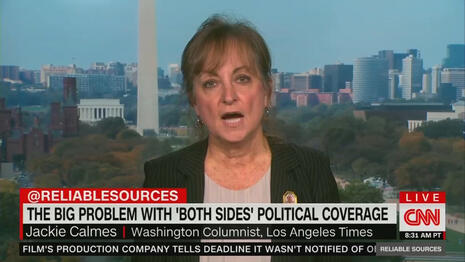 Jackie Calmes, formerly a pro-Democrat journalist for the New York Times, is now a DC-based columnist for the Los Angeles Times. Her Friday cri de coeur sympathized with the poor-me Democrats who just can’t get their message out in the media (!): “Megaphone is bigger problem for Democrats than messaging.” Calmes opened with a whine.

Democrats have a messaging problem, as you’ve no doubt heard since their recent election losses.

Tellingly, even Calmes’ purported criticisms of Democrats are offered with affection and sympathy. They’re just too nice!

The problem hardly started with President Joe Biden, a weak messenger given that he’s been underwater in the polls since August. Weak messaging has defined Democrats for most of the years I’ve covered them. Theirs is a diverse, fractious party that currently spans “the Squad” on the left to Manchema on the right; what’s “on message” is often up for debate. They’re wonky and wordy: A Democratic bumper sticker, the joke goes, ends with “Continued on next bumper sticker.” They resist spiking a football amid good news, for fear of seeming insensitive to anyone who’s not feeling it.

There's strange envy for the GOP’s “conservative media ecosystem,” as if CNN/MSNBC, all three news networks, and all the major newspapers (as well as academia and Hollywood) don’t provide a blaring pro-Democratic megaphone.

Republicans have an entire conservative media ecosystem, dominated by Fox News and extending to right-wing websites and local talk-show hosts, to amplify their message -- even to set the political conversation as with critical race theory -- and to shred Democrats’ arguments.

While Republican Glenn Youngkin managed to win over both pro-Trump rural voters and many anti-Trump suburbanites to be elected Virginia’s governor, key to his balancing act was conservative media. Fox News was Youngkin’s direct channel to MAGA voters….

….Republicans and others who suggest CNN, MSNBC, the New York Times, the Los Angeles Times and the rest of mainstream media are comparably in Democrats’ corner aren’t paying attention.

The Media Research Center has been paying attention for over 30 years.

Calmes couldn’t actually deny the Democratic slant of CNN and MSNBC in the Trump era, so unconvincingly shifted gears:

As Democrat-friendly as CNN and MSNBC are, they thrive on covering conflict, as journalism always has. For months, the conflict has been among the Democrats who control the White House and Congress -- progressives versus moderates, battling to pass an ambitious domestic agenda despite thin House and Senate majorities. Mainstream media has been a megaphone for the “Democrats in disarray” narrative that’s been so damaging to Biden and his party.

Calmes whined that Republicans were getting away with ignoring all the wonderful goodies with which Democrats would bless the people, which she documented at tiresome length.

….Too often Republicans are allowed to dismiss the entire package simply as “socialism” or “wasteful spending,” without being challenged to address its popular particulars. What about paid sick leave, home healthcare, another year of monthly child tax credits that have lifted millions out of poverty, universal prekindergarten, two years of community college, a cap on families’ child-care expenses, healthcare subsidies....

Calmes policed the parameters of proper political debate. Anything that helped Republicans were distracting “culture wars” and “conspiracy theories.”

….the message from Republicans and their media propagandists elevates culture wars over policy discussions (what policies?), and conspiracy theories over facts, even about presidential elections and insurrectionists (Tourists? Patriots? Let’s just move on).

Calmes had previously made the suggestion that the press was just too easy on the GOP in a mid-October column under the headline "Why journalists are failing the public with ‘both-siderism’ in political coverage."