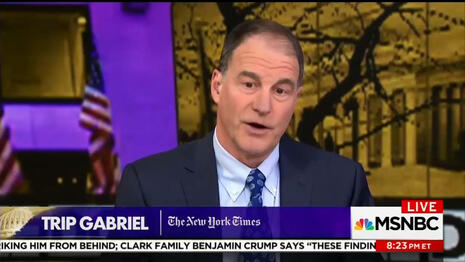 But when the shoe is on the other foot, and it’s liberal activists playing gotcha games with conservatives, then the scrutiny is neutered. Note Trip Gabriel’s story posted Thursday, “The Liberal Activist Who Targets Republicans With a MAGA Masquerade -- Pretending to be like-minded, Lauren Windsor has generated headlines by coaxing conservatives like Tommy Tuberville and Glenn Youngkin into making revealing statements about their views.” (Windsor is a favorite of ultra-liberal MSNBC host Joy Reid.)

Gabriel injected some nitpicks into the mix, but the gestalt is a flattering profile of a clever conservative-hunter.

Mike Pence told her, “I love your heart.”

Representative Jim Jordan of Ohio confided in her that Donald J. Trump would soon announce he was running again for president in 2024.

Glenn Youngkin, the Republican nominee for governor of Virginia, revealed to her that he could not publicly press his anti-abortion agenda for fear of losing independent voters.

Nothing earthshattering there, making the point of Gabriel’s profile elusive.

All of them made these comments to Lauren Windsor, a liberal activist who has turned a hidden camera, a Tennessee drawl and a knack for disarming her targets with words of sympathetic conservatism into a loaded political weapon.

Posing as a true believer -- in Mr. Trump or a stolen 2020 election -- Ms. Windsor approaches Republican leaders at party gatherings and tries to coax them into revealing things that they might wish to keep in the G.O.P. family.

Her practices have drawn inevitable comparisons to the right-wing gotcha squad Project Veritas, but she says there are crucial differences.

While Project Veritas has embedded moles in left-leaning groups and Democratic campaigns, Ms. Windsor says she avoids such methods.

We learn too late that Windsor may have a personal vendetta against O’Keefe:

Ms. Windsor also has a personal back story with Project Veritas – which is led by the conservative activist James O’Keefe – that hangs over her career.

….Edited videos posted by Project Veritas showed a subcontractor for Mr. Creamer discussing potential ways to incite violence at Trump rallies. The videos embarrassed the Clinton campaign, and Mr. Creamer stepped back from the race in its final weeks.

Windsor even helped the Times bring down a Veritas operation.

More recently, Ms. Windsor provided a document to reporters at The New York Times about a planned operation in 2018 involving Project Veritas operatives….

An Arkansas native who was raised near Nashville, Ms. Windsor in her encounters dials up her Southern accent and postures as a wide-eyed conservative, sometimes in a MAGA hat. It encourages politicians to “mansplain” to her, she said.

Can one imagine the Times painting a similar portrait of liberal-hunting James O’Keefe of Project Veritas, whose discoveries are more surprising and newsworthy?

Gabriel’s take is nothing like the Darth Vader treatment doled out by the Times to conservatives doing deeper undercover work. The paper excoriates those activists as democracy-threatening “conservative spies.” “They Seemed Like Democratic Activists. They Were Secretly Conservative Spies. -- Operatives infiltrated progressive groups across the West to try to manipulate politics and reshape the national electoral map. They targeted moderate Republicans, too -- anyone seen as threats to hard-line conservatives.”

The text's summary of two people posing as “idealistic Democrats” was equally hostile: “In fact, much about them was a lie.”

Neither “spy” nor “lie” made an appearance in Gabriel’s positive profile of Windsor.