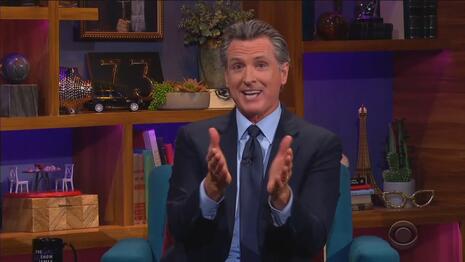 Newsom is suffering a backlash fueled by his harmful lockdown policies and hypocritical stance on Covid restrictions, as shown when he attended an indoor birthday party with lobbyists at the French Laundry restaurant after advocating restrictions on everyone else.

President Biden sent an urgent message last week to the most populous state in the nation: Keep Gov. Gavin Newsom “on the job.” On the airwaves, Senator Elizabeth Warren, the prominent progressive from Massachusetts, has been repeatedly warning that “Trump Republicans” are “coming to grab power in California.”

Less than a quarter of the electorate is Republican. Mr. Newsom has raised more campaign cash than all four dozen or so of his challengers put together. And the governor’s most serious rival is the talk radio host Larry Elder, who has called global warming “a crock,” says the minimum wage should be “zero-point-zero-zero,” and gave Stephen Miller, the hard-line Trump administration immigration adviser, his first big public platform.

Impressively, they even got in a shot at liberal arch-enemy Gov. Ron DeSantis of Florida.

But the coronavirus pandemic has not been particularly governor-friendly. Polls this month show that approval for Gov. Ron DeSantis of Florida is sagging as the state writhes under spiking deaths and hospitalizations.

The Times dealt with Newsom’s coronavirus hypocrisy in half a sentence, then moved on to portray Larry Elder as extreme.

….pandemic-related shutdowns prompted a judge to extend the measure’s signature-gathering deadline, and then word leaked that the governor had dined unmasked with lobbyists at an exclusive restaurant after imploring Californians to cover their faces and stay home.

Mr. Elder, 69, a Black “small-l libertarian” lawyer who rose to national stature from Los Angeles, where he has been a talk radio fixture for decades, said in an interview that he was not “some wild-eyed radical,” and that he entered the race at the behest of “normal people” such as his barber and dry cleaner as well as like-minded friends such as Dennis Prager, his right-wing broadcast mentor. His priorities -- public school choice, high housing costs and rising crime -- transcend party labels, he said.

The Times enforced its extremist climate change views, calling Elder a liar for accurately stating that no one knows how much human action contributes to rising global temperatures.

….Remarks such as the one he made in 2008 on “Larry King Live” discounting global warming were merely to criticize “alarmism,” he said, acknowledging that climate change is happening but adding, falsely, that “nobody really knows to what degree” it is caused by humans.

Hubler and Cowan found hope for the Democrats,

The mere reminder that ballots are heading for mailboxes should turn many tuned-out Democrats into likely voters, Mr. Click said, and teams of supporters have been texting some 500,000 Democrats daily….

The reporters signed on to Sen. Warren’s liberal characterization of the recall as a “Trump Republican” takeover, not a popular reaction to Newsom's arrogant governorship, quoting Democratic consultant David Townsend in conclusion: