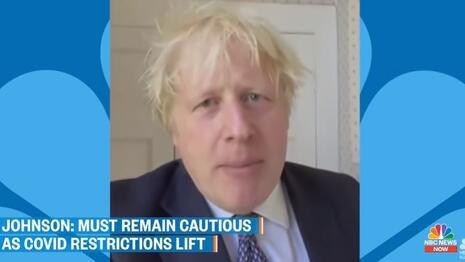 The New York Times never misses a chance to go after Prime Minister Boris Johnson, leader of the Conservative Party in Great Britain, whether smearing him as tolerant of soccer racism or bashing him over a successful Brexit strategy.

After months of vigilant coverage of the United Kingdom’s struggle with the coronavirus, the paper has abruptly forgotten it, even though Johnson’s late-July decision to open up life again in the U.K is paying off -- grim predictions of 100,000 cases a day not coming to pass.

But instead of covering that good news, the Times again bashed him for garden-variety political acts to stir up liberal outrage. Saturday’s piece by Stephen Castle, “Cronyism and Profiteering Allegations Roil Britain’s Conservative Party,” told a familiar liberal media story of “conservative sleaze.”

In the case of Great Britain, it's “Tory sleaze,” an insult previously hurled by the Labour Party and the press during the mid-90s, now being recycled by current Labour leader Keir Starmer and eagerly taken up by the Times. ("Tory" is the nickname for the Conservatives in the United Kingdom.)

Always ready to denigrate British conservatives, the Times included a photo of a defaced Conservative campaign poster from 2019.

A multimillion-dollar payday for a former British prime minister. A secretive group of wealthy donors with special access to top politicians. A party fund-raiser with close connections not just to Prime Minister Boris Johnson, but also to Britain’s royal family.

Already under fire over lucrative contracts awarded to politically connected firms during the pandemic, Britain’s governing Conservative Party is being battered by a litany of new accusations of influence-peddling, cronyism and profiteering.

Yet this paragraph would seem to neutralize the insinuations of the three-quarter page story:

While no laws or even rules appear to have been violated, critics say that the accusations point to a troubling decline in accepted standards in public life and reinforce their contention that the system has too few checks and balances to prevent such behavior.

Britain is no stranger to political scandals, including one in 2009 over expense claims by lawmakers. But amid the crush of allegations lately, experts worry that the government is lapsing into what the opposition Labour leader, Keir Starmer, has sought to label “Tory sleaze.”

Steven Fielding, a professor of political history at Nottingham University, said the traditional controls were under strain partly because Britain’s Conservatives were entrenched in power and had been for more than a decade, and partly because of Mr. Johnson’s own personality.

Honestly, the evidence of corruption comes off thin, at least by American standards.

The prime minister has brushed off complaints over the financing of a Caribbean vacation, the pricey refurbishment of his apartment in Downing Street and his refusal to accept the judgment of an ethics adviser that a senior cabinet minister, Priti Patel, broke official rules by bullying civil servants.

“There are few formal checks and balances,” he said. “It’s more about ‘gentlemen’s agreements,’ and we haven’t got a ‘gentleman’ as prime minister.”