On Wednesday, reporters Reid Epstein and Trip Gabriel took a look at new voting legislation in Michigan, leading with another redundant attack on Donald Trump. The headline was "As Michigan G.O.P. Plans Voting Limits, Top Corporations Fire a Warning Shot." Trying to prevent fraud is "voting limits." Before 2020, the Times printed stories about falsified absentee ballots. No longer:

At first glance, the partisan battle over voting rights in Michigan appears similar to that of many other states: The Republican-led Legislature, spurred by former President Donald J. Trump’s lies about election fraud, has introduced a rash of proposals to restrict voting access, angering Democrats, who are fighting back. 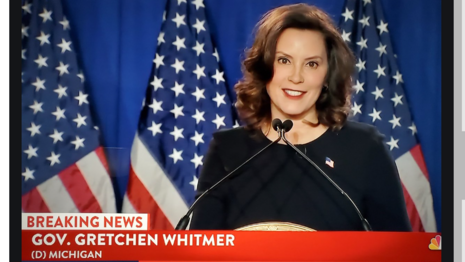 But plenty of twists and turns are looming as Michigan’s State Senate prepares to hold hearings on a package of voting bills beginning Wednesday. Unlike Georgia, Florida and Texas, which have also moved to limit voting access, Michigan has a Democratic governor, Gretchen Whitmer, who said last month she would veto any bill imposing new restrictions. But unlike in other states with divided governments, Michigan’s Constitution offers Republicans a rarely used option for circumventing Ms. Whitmer’s veto.

Last month, the state’s Republican chairman told activists that he aimed to do just that -- usher new voting restrictions into law using a voter-driven petition process that would bypass the governor’s veto pen.

The Republican proposal includes restrictions on absentee ballots and limiting the use of drop boxes.

The Times touted "The chief executives of 30 of Michigan’s largest companies, including Ford, General Motors and Quicken Loans, announced their opposition on Tuesday to changes in the state’s election laws that would make voting harder — an apparent effort to get ahead of the issue, rather than come under pressure after laws are passed, as happened to two big Georgia-based companies, Coca-Cola and Delta Air Lines."

This pungent paragraph packed in a lot of anti-Republican hostility:

But the bulk of proposed changes would impose new hurdles to absentee voting, after Mr. Trump and Michigan Republicans last year spread misinformation about wide fraud and “irregularities” in the use of mail ballots. They particularly targeted Detroit, the state’s largest city, which has a majority-Black population.

“Misinformation” about mail ballots? At The Federalist, writer Eric Felten pointed out the paper’s recent history of concern over the security of absentee ballots, making the paper’s turn on Trump look like hypocrisy.

In 2018, operatives working for the Republican candidate for North Carolina’s Ninth Congressional District seat falsified absentee ballots. Times reporters Alan Blinder and Michael Wines told readers that the state’s long history of election fraud was “under a spotlight.” They quoted lawyer Bill Gilkeson saying that “absentee ballots” were “where the fraud really happens.” In 2019 Blinder wrote, “The Ninth District controversy ranks among the highest-profile examples of modern election fraud,” one that “underscores how absentee ballots remain susceptible to abuse.”

The Times didn't respond to Felten's inquiry on "whether the paper’s current enthusiasm for absentee voting meant its staff’s previous criticism and reporting were wrong or misleading."