NY Times: ‘Sen. Mazie Hirono Wonders How Some Republicans Live With Themselves’ 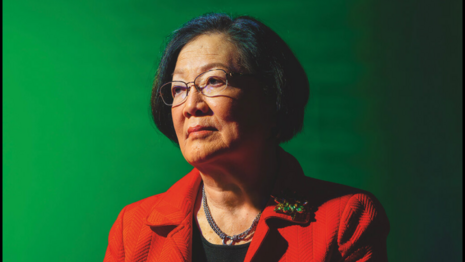 Reporter David Marchese interviewed Sen. Mazie Hirono, liberal activist  and scourge of Brett Kavanaugh during his 2018 Supreme Court hearings, for The New York Times Magazine. The headline is "Sen. Mazie Hirono Wonders How Some Republicans Live With Themselves."

Marchese opened the profile with a long brag about her ascent under Trump: "She publicly said President Trump was a misogynist and a liar and called for his resignation (as early as 2017, mind you). She unabashedly punctuated her comments with salty language. And it wasn’t just her unexpected transition that raised her profile: Senator Hirono’s forceful questioning during the Kavanaugh and Barrett Supreme Court confirmation hearings."

Here's some of the softball questions Marchese tossed to Hirono.

The Senate is supposed to be the world’s greatest deliberative body, and instead it’s where so much legislation goes to die. Do you feel that it’s broken? ….

What, if any, pressure is being exerted to move the Democratic senators hesitant about eliminating the filibuster -- like Manchin and Sinema -- in the direction that you think the party needs them to go?

A question about scandal-plagued New York Gov. Andrew Cuomo was deflected by Hirono with a Kavanaugh reference, and he let her fawn over his accuser Christine Blasey Ford, without bringing up the holes in Ford's story.

Hirono: These kinds of allegations should be investigated. That certainly didn’t happen in the Kavanaugh case, by the way. The sham FBI investigation was so limited in its scope that Dr. Blasey wasn’t questioned, and other people who could have corroborated the allegations were never questioned.

You wrote in your book about a meeting you had with Dr. Blasey in Hawaii after Kavanaugh’s confirmation. She wanted to thank you for saying you believed her allegations. What else did she say about how that situation played out?

Hirono: ….[Ford] conducted herself with such grace. It was such a contrast to Kavanaugh, who is just a political operative. In my view he’s not a very good lawyer. I’ve gotten to know Merrick Garland a little bit, and he told me he was watching the Kavanaugh hearings. Merrick Garland is not somebody who says anything bad about anybody, but the Garza case -- when Kavanaugh said that was a parental-consent case, did you almost fall off your chair, as I did?

No mention of Hirono spouting that women like Ford simply "need to be believed," lack of evidence be damned. No mention of the Democratic senator telling men to "shut up and step up."

At least Marchese asked this about the Barrett questioning: "Where’s the line with religious questions for judicial nominees?"

Marchese set up Hirono with the softball that earned the story’s headline.

#I’m curious about interpersonal relationships in the Senate after Jan. 6 and also in the light of continued threats of violence at the Capitol. Have things changed -- on a human level -- with you and your Republican colleagues since then?

Hirono: It is hard to talk with them in any other way than purely transactional. What am I going to say? “How could you not condemn the incitement to insurrection?” I often wonder how they wake up in the morning and face themselves, but they are obviously able to bifurcate….

One question the Times will never pose: How can Hirono live with herself after suggesting Kavanaugh’s conservative approach to the Constitution made his rape denial less believable? Neither did Marchese ask about Hirono fundraising off the allegations, using the supposedly serious matter for political gain.