Petulant NY Times Can't Admit They Were Wrong on Brexit, Despite THIS Step Forward 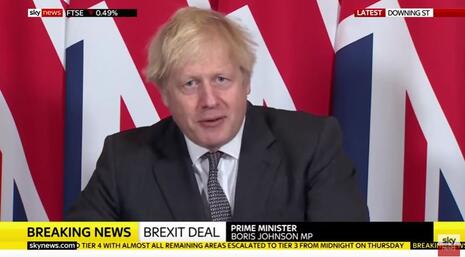 New York Times London bureau chief Mark Landler tried to trip up Great Britain’s Conservative Party prime minister Boris Johnson while he does a victory lap over a successful Brexit, and a successful roll-out of coronavirus vaccines, in “Brexit Is Done, but the U.K. Keeps Brussels as a Punching Bag,” in Monday’s paper.

Landler, who is hostile toward Johnson, Brexit, and conservative media mogul Rupert Murdoch but who loves the left-wing lean of the BBC, amplified European Union whining that the United Kingdom, freed from Brexit, were able to complete a deal to get sufficient vaccines quickly to its citizens, while the sclerotic European Union dithered in its negotiations with pharmaceutical companies to disastrous results.

Few people on either side of the English Channel believed that Britain’s exit from the European Union would go off without a hitch. So when horror stories surfaced about rotting shellfish, empty delivery trucks and eye-popping customs fees, many reacted less with shock than grim resignation.

But Britain and the European Union have also fallen out politically and diplomatically, with a speed and bitterness that has surprised even pessimists about the relationship….

As always with Brexit, much of the antagonism is being driven by domestic politics. Feelings have become raw in Europe because of the perception that Britain, which has rolled out vaccines much faster than the European Union, did so in part by hoarding doses from its homegrown manufacturers.

President Emmanuel Macron of France questioned the efficacy of a vaccine developed by AstraZeneca and the University of Oxford in people over the age of 65. That nationalistic message may have played well with his political base, even if critics pointed out that the World Health Organization and the European Union had recommended the vaccine for all adults.

Here’s proof that conservatives “seize” abroad as well as in the United States.

In Britain, some politicians have seized on the vaccine gap as vindication of the vote to leave. On a range of issues, it is clear that the fulfillment of Brexit has not soothed antagonism toward the E.U., either in the government or among the hard-core band of Brexiteers in Mr. Johnson’s Conservative Party.

Landler’s labels make the pro-Brexit movement, which after all won a national referendum in 2016, sound fringe.

The latest demands by the Brexiteer lawmakers may reflect a simple desire to stay in the limelight, having accomplished their defining goal of leaving Europe. But it also dramatizes the enduring appeal of euro-skepticism -- a narrative of grievance that British politicians can deploy to deflect criticism for anything from trade hiccups to deeper economic problems.

For lawmakers and the government, bashing Brussels became all the more tempting after the European Commission, the E.U. executive arm, threatened to rip up one of the key provisions of the protocol last month. While it reversed itself after a few hours, the threat is now regarded as a self-inflicted wound of rare magnitude.

“Why not kick the E.U. when it’s down?” said Timothy Bale, a professor of politics at Queen Mary University of London. “That’s long been a reflex for this government, and it is very hard to get out of this reflex.”

When Landler is obliged to cover news that makes Prime Minister Johnson look smart and Brexit look prescient, like the EU’s disastrously botched vaccine rollout, his praise is exceedingly faint:

The European Union’s ham-handed threats over coronavirus vaccine exports have put Prime Minister Boris Johnson in an unaccustomed place this week: standing on the moral high ground in a dispute with Brussels.

Suddenly, the blustery Brexiteer who once threatened to rip up parts of Britain’s withdrawal agreement with the European Union looked like an aggrieved victim.