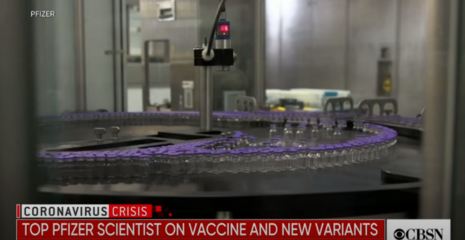 A New York Times Sunday story by Los Angeles bureau chief Manny Fernandez pushed a myth that “anti-vaxxers” -- those opposed to vaccinations, often for discredited or conspiracy-based reasons -- are a predominantly “far-right” domain, in “A New Coalition Forms Against Vaccines in California.”

The text box furthered the idea that those opposed to draconian lockdowns were driving the small but supposedly dangerous protest movement against the coronavirus vaccine: “Shifting the focus of antigovernment anger to inoculations.”

An out-of-work stand-up comic originally from New Jersey. An actor and conservative podcast host dressed in a white lab coat. A gadfly who has run several unsuccessful campaigns for Congress in Los Angeles. And at least a few who had been in Washington the day of the Capitol riot.

They were among the motley crew of so-called anti-vaxxers who recently converged on the entrance of the mass vaccination site at Dodger Stadium to protest distribution of a coronavirus vaccine.

For months, far-right activists across the country have been rallying against mask-wearing rules, business lockdowns, curfews and local public health officials, casting the government’s response to the virus as an intrusion on individual liberties. But as masks and lockdowns become an increasingly routine part of American life, some protesters have shifted the focus of their antigovernment anger to the Covid-19 vaccines.

Fernandez’s focal point was a brouhaha outside Dodger Stadium, a vaccination site.

Last week at Dodger Stadium, the same small but vocal band of demonstrators who previously staged anti-mask and anti-lockdown protests in the Los Angeles area disrupted a mass vaccination site that gives an average of 6,120 shots daily. About 50 protesters -- some carrying signs reading “Don’t be a lab rat!” and “Covid = Scam” -- marched to the entrance and caused the Los Angeles Fire Department to shut down the city-run site for about an hour.

Fernandez glossed over the fact that California’s vaccine skepticism began among the Hollywood left and apparently includes such Democratic luminaries as Vice President Kamala Harris.

In California, the anti-vaccine movement has been popular for decades among Hollywood celebrities and wealthy parents, gaining momentum as state lawmakers passed one of the nation’s toughest mandatory vaccination laws for children in 2015. Previously, parents had opted out of vaccinations by seeking exemptions claiming that vaccines conflicted with their personal beliefs, but the law eliminated that option. The popularity of those exemptions led to immunization rates that dropped to 80 percent or lower at public and private schools and preschools in Beverly Hills, Santa Monica and other affluent Los Angeles area communities.

In other words, not exactly Republican hotbeds.

In the Covid-19 era in California, vaccine opponents have found themselves increasingly in alignment with pro-Trump, working-class people sometimes eager to embrace extreme tactics to express their beliefs.

Anti-vaccine activists in the state have long been aggressive at times. But in the past two years, and in the months of the coronavirus pandemic, there has been an uptick in confrontational and threatening tactics.

The tactics are indeed awful, if similar in nature to left-wing environmental groups that the press grants a free pass to.

After a single paragraph allowing the protestors to say “they did not attempt to enter the site and did not block the entrance” and blaming overreaction by firefighters, the same paper that praised Black Lives Matter protests (which often descended into rioting and looting) were quick to hint at arresting the anti-vaxxers

No one was arrested, but city officials, including the police chief, were disturbed by the symbolism and the global headlines -- that a small group of vaccine opponents had temporarily shut down one of the country’s largest vaccination sites and were walking and chanting mask-free among older residents waiting in their cars for their vaccine appointments.

The Times’ coverage even suggested arresting peaceful protestors would be a valid reaction.

The paper has a history of falsely describing the anti-vaccination movement as conservative when it in fact has its roots on the left.

Fernandez’s one-sided story also ignored the inconvenient fact that Trump-voting red states like West Virginia and Alaska and the Dakotas are vaccinating their residents far faster than many so-called pro-science blue state bastions like California, as the paper’s own figures show. So which side is "anti-vaccine" again?