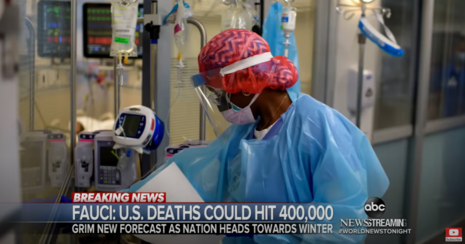 The New York Times offered a parting gift to Donald Trump by laying the 400,000 COVID-related deaths in America during 2020 at his feet (while sparing a single sentence to his Operation Warp Speed, which delivered vaccines in record time).

Monday’s massive front-page story, “400,000 Deaths in a Year And Failure at Every Level,” was a comprehensive assault against Trump’s response to the COVID virus that left out a lot to make it all his fault. Well, his fault and also that of red state governors who moved too quickly to restart their economies.

Reporters Sarah Mervosh, Mike Baker, Patricia Mazzei, and Mark Walker were obsessed with masks, but blurred the fact that press opinion during the early days of the pandemic was mixed on masks, either through scientific doubt (A March 17 Times headline read: “Here to Help; Cope With the Coronavirus: Masks, No. Groceries, Yes”) or the "noble lie" of Dr. Anthony Fauci discouraging public mask use in order to preserve protective equipment for doctors.

The severity of the current outbreak can be traced to the rush to reopen last spring. Many governors moved quickly, sometimes acting over the objections of their advisers. The reopenings nationally led to a surge of new infections that grew over time: Never again would the country’s average drop below 20,000 new cases a day.

Science was sidelined at every level of government. More than 100 state and local health officials have been fired or have resigned since the beginning of the pandemic….

The reality of an extremely contagious disease, combined with lockdown fatigue (and the mental health issues that go with it) are ignored. Apparently the only thing stopping the USA from racking up impressive, New Zealand-like numbers against the virus was “the rush to reopen,” otherwise known as enabling people to make a living.

The reporters criticize Trump, who in every other context is a wannabe dictator, of not being sufficiently dictatorial. Do they really think that liberals who hate Trump would have instantly complied when told cover their faces?

In their hurry to get back to business, many governors moved swiftly to reopen and balked at ordering new closures, sometimes ignoring the pleas of local health boards and mayors….

No mention of the George Floyd protests of the summer, which included maskless marauders among the rioters and looters. The only protests the story mentioned were the far smaller ones against lockdowns.

The Times singled out red states for condemnation:

Perhaps nowhere were the consequences of reopening more clear than in Texas.

With 29 million residents and a conservative identity built upon being friendly for business, Texas was among the states that were later in enacting stay-at-home orders. Within two weeks, protesters were clamoring outside the governor’s mansion, waving flags emblazed with the motto “Don’t Tread on Me” and demanding to be able to go back to work.

….on May 1, Texas opened back up, starting with restaurants, stores and movie theaters. By Memorial Day, Texas was effectively up and running.

A spokesman for Mr. Abbott pointed to states like California and New York, which kept restrictions in place for longer but have recently seen resurgences of the virus, as evidence that “lockdowns for months after months” do not work. He said Mr. Abbott had balanced “saving lives, while preserving livelihoods.”

Then the report pivoted to criticism of another red state, Florida, and its Republican governor Ron DeSantis, and made similar criticism of his opening plans, concluding:

It was a devastating toll, but one that would soon worsen.

But how has Florida actually done against the virus, vague Times cheap shots notwithstanding? Well, better than California, Connecticut, or Massachusetts, by the paper’s own metrics. The Times’ own figures on excess deaths by state during 2020, as demonstrated in a related article, show Florida to be on the better side of normal range.

Cherry-picking, the Times praised a couple of restrictive blue states:

Washington State, which recorded 37 of the nation’s first 50 coronavirus deaths, has kept in place a steadily adjusting suite of mitigation measures and now ranks 44th in deaths per capita. If the nation had achieved a rate comparable to Washington’s, about 220,000 fewer people would be dead. Vermont has also been among the states with the fewest deaths, thanks in part to a cautious reopening, significant testing and a mask order.

They eventually admitted the biggest blue state, California, “is now experiencing one of the worst outbreaks in the nation” and mentioned the hypocrisy of Democratic Gov. Gavin Newsom attending an indoor birthday party at the French Laundry restaurant.