While the New York Times has piled hostile coverage on the Republican candidates in the vital U.S. Senate runoff in Georgia, the paper has reliably defended the two Democratic challengers.

Democratic candidate Raphael Warnock is shielded from GOP attacks by Times reporters, who counter by hurling racism accusations at Warnock’s Republican opponent Sen. Kelly Loeffler. Meanwhile, Democratic candidate Jon Ossoff (who mounted a failed 2017 bid for a congressional seat from Georgia in a special election) was awarded front-page puffery from reporters Reid Epstein and Serge Kovaleski, “After Some Breaks in Politics, Ossoff Made a Few of His Own.” He faces Sen. David Perdue in a runoff that finishes on January 5.

Monday’s story opened with bullet points that could have come straight off Ossoff’s resume: 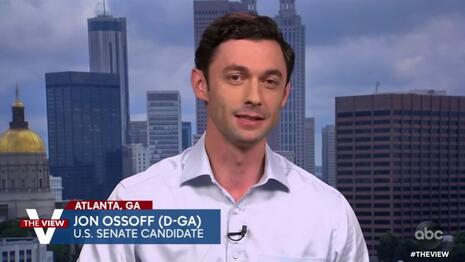 Jon Ossoff was 16 years old when he wrote a letter to John Lewis, the Georgia congressman and civil rights pioneer, that led to a spot as a volunteer in Mr. Lewis’s office.

When Mr. Ossoff was 19 and a rising sophomore at Georgetown, he went to work for Hank Johnson as the primary speechwriter and press aide for Mr. Johnson’s 2006 congressional campaign.

And Mr. Ossoff was 26 when, without any journalism experience other than an internship, he was made chief executive of a small documentary film company based in England.

Mr. Ossoff has always been adept at making his own breaks. He has consistently outperformed his professional résumé, impressing lawmakers many years his senior with his intellect and drive. And he has capitalized on his own well-off upbringing and a series of well-timed introductions and personal endorsements to rise through Democratic politics in Georgia.

The Times, which tried so hard to push Ossoff to victory in 2017, on Monday worked to catapult Ossoff up the next step in the resume and into a U.S. Senate seat.

Now 33, Mr. Ossoff is pursuing his most ambitious goal yet: to capture a seat in the United States Senate against an incumbent Republican, David Perdue, in a traditionally conservative state. If successful, he would become the youngest senator in 40 years.

The paper soft-pedaled Ossoff’s lack of political experience – the U.S. Senate would be his first political office.

….far from apologizing for his youth, he has cast himself as the inheritor of the legacy of young people who have taken leadership roles in progressive political organizations in the South.

This criticism of Ossoff’s resume padding and privileged start was pathetically mild:

Mr. Ossoff began his first campaign for Congress in 2017, he initially ran his campaign headquarters out of the basement of his parents’ Atlanta home. When he was in Washington, he stayed at a Capitol Hill townhouse owned by his father.

At the time, Mr. Ossoff described himself as a former “senior national security staffer,” which was something of an embellishment considering that he had been a midlevel committee staff member for Mr. Johnson.

More hagiography under the subhead “Impressing John Lewis” was followed by an anecdote about “a small dinner party with his mother in southwestern France….on a lovely summer evening,” where yet another opportunity was born, with the founder of what would become Insight TWI.

[Former BBC journalist Ron] McCullagh and the teenage Jonathan Ossoff, as he called himself then, spoke for several hours, leading to a lasting friendship and a professional relationship….“He told me about his thoughts on Chinese and American relationships, the importance of the China Sea” and the “strategic importance for the world of freedom of trade in that part of the world.”

That quote could have made a smooth segue to less-flattering details about Ossoff’s resume regarding China. But neither that, nor the paper bragging about his quick ascension to the CEO slot of Insight TWI, stirred any China curiosity on the part of the paper.