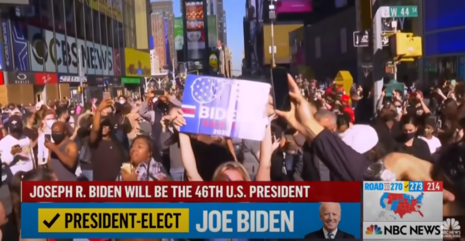 Have Times reporters not been reading their own celebratory stories about liberal Biden fans (who are supposedly most diligent about following the science regarding health measures) pouring into the streets for unregulated block parties, dancing, singing, and sharing Champagne?

The Times joined the ideologically selective condemnation after Yahoo! and USA Today had earlier condemned the Notre Dame field rushers (and who also didn’t mention the nationwide Biden block parties.)

The paper certainly won’t spoil the mood of the pro-Biden partiers. But college football, pushed to return to action by Trump, is a more promising target, perhaps especially at a Catholic university, and Witz opened fire:

As soon as the final whistle blew, signaling that last-gasp laterals would not prevent the Notre Dame football team from its biggest win in a generation -- a 47-40 double-overtime defeat of top-ranked Clemson on Saturday night -- a can’t-look-away scene unfolded at Notre Dame Stadium.

Thousands of students leapt over brick walls, dashed past overwhelmed security guards and stormed the field, gleefully mobbing the Notre Dame players and one another. They reveled for more than 15 minutes, ignoring announcements to retreat.

In normal times, a scene like this is a rite of college football. But these are not normal times.

In this stripped-down pandemic football season, devoid of pageantry and sold-out stadiums, and with nearly 50 games postponed or canceled as universities struggle with the virus, the sight of thousands of mostly masked marauders creating a mosh pit at midfield was jarring enough that the NBC broadcaster Mike Tirico observed: “In the midst of the pandemic, there is pandemonium in South Bend.”

Perhaps knowing he could not skip the issue entirely, Witz sketched out the nationwide Biden celebrations with extremely mild criticism delivered via flip ironic comments.

Saturday was a historic day, of course, not just for those who follow Notre Dame football, but also because the most rancorous and drawn-out presidential election of a lifetime was decided. The victory of Joseph R. Biden Jr. over President Trump brought forth its own impromptu celebrations in streets around the country -- some more masked and socially distant than others.

The risks of attending a march protesting police brutality, a motorcycle rally in South Dakota, a Hasidic funeral in Brooklyn or a Supreme Court judicial announcement at the White House carry different weight to different people. The same holds for college football.

Notre Dame allowed 11,011 spectators on Saturday -- about a seventh of the stadium’s capacity -- and 75 percent of those attendees were students....

The Times hasn’t bothered to estimate how many Biden fans have crowded the streets of American’s big cities. No threat of a “super-spreader” event when Democrats congregate.

In an email on Monday to faculty and staff, Dan Lindley, an associate professor of political science, urged school leaders to lock down campus for the rest of the semester….

He performed a post-mortem on the 15-minute, outdoor incident which even he admitted was “mostly masked,” something the paper has not come close to doing for the Biden parties, much less the “racial justice” protests this summer:

How the virus might have spread on Saturday night will be unclear for days or weeks. Fox, the public health official, said it might be difficult to trace new cases to the crush of students. He was somewhat heartened that many wore masks as they poured onto the field.

“But a mask alone in that situation doesn’t offer a lot of protection,” he said. “I’ve got to assume there were 5,000 or 6,000 kids on the field, and even though there were some pretty remarkable efforts to limit the number of students who were positive, I’ve got to assume there are some. Because of the shouting and hugging and the close proximity, there will be other infections stemming from that.”

“Shouting and hugging and the close proximity”? Sounds like a Biden party. But Covid doesn’t affect liberals. It’s science!