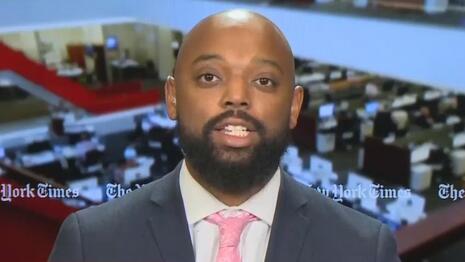 With a week to go before Election Day, the New York Times is playing aggressive defense for the Democrats, suggesting any mention of socialism is a dangerous lie, while also dismissing predictions and rhetoric by President Trump as “lies.”

Political reporter Astead Herndon filed “Moderate Democrats in Senate Bids Are Painted as Radicals by Rivals” for Tuesday’s edition. From Herndon’s perspective, Democrats are being responsible and issue-oriented (and praised even when attacking their party leadership), while the GOP is fear-mongering.

With about a week until Election Day, labeling their opponents as radicals has become the closing message for Republicans in tight races around the country. While Democrats have focused on health care access and getting the coronavirus pandemic under control, most Republicans have settled on a message of grievance -- that Democratic governance would bring socialism and left-wing extremism.

[Iowa Democratic U.S. Senate candidate Theresa] Greenfield, like Democratic candidates for the Senate in Georgia, North Carolina, South Carolina and Texas, has balked at progressive issues like single-payer health insurance, adding seats to the Supreme Court and defunding the police.

Herndon passed on smug Democratic confidence that the Republican “name-calling” would fail.

In an interview, Ms. Greenfield’s ease in rebutting accusations of radicalism showed how some Democrats were increasingly confident that the Republican strategy of name-calling had not worked.

The photo caption showcased Virginia Democratic Rep. Abigail Spanberger as “pushing back against Republican misinformation.” These days, “misinformation” these days has an echo of “Russian interference,” and was perhaps an intentional word choice by the Times to make their tactics seem more sinister. In fact, Spanberger is merely a “victim” of standard campaign rhetoric. "Moderate" Spanberger had an American Conservative Union score of 10.3 percent in her first year in office.

A long, hostile fact-check article targeting Trump by Linda Qiu and Michael Shear (“Thousands of Attendees, but Hardly Any Truth -- Rallies Are the Core of the President’s Campaign, and Fonts of Lies and Misinformation”) featured "lie" accusations regarding Trump stump statements that were either predictions of what a President Biden would do, or generic rhetoric not meant to be parsed literally.

Two minutes and 28 seconds into a campaign rally on a recent Saturday night in Janesville, Wis., President Trump delivered his first lie.

“When you look at our numbers compared to what’s going on in Europe and other places,” Mr. Trump said about the coronavirus raging across the United States, “we’re doing well.”

The truth? America has more cases and deaths per capita than any major country in Europe but Spain and Belgium. The United States has just 4 percent of the world’s population but accounts for almost a quarter of the global deaths from Covid-19. On Oct. 17, the day of Mr. Trump’s rally in Janesville, cases were rising to record levels across much of the country.

But Trump used the present tense, and in the present, Covid case numbers are rising all across Western Europe. The per capita rate for new cases in France and other European countries is now higher than in the United States. 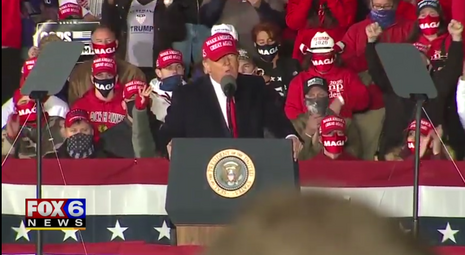 He claimed to have enacted the “biggest tax cut in history” (it wasn’t); that Mr. Biden was “going to raise your taxes substantially, like quadruple” (the Democratic candidate has promised no tax increase for people making less than $400,000); that “everybody owns stocks” (half of the country does not); that “we cut more regulations than any administration in history” (there is no evidence for this); that Mr. Biden would “ban fracking” (he has said he would not); that Democrats would reduce the child tax credit (Mr. Biden has promised to expand it)….and warned that Mr. Biden would impose a “draconian, unscientific lockdown” (Mr. Biden has said that if scientists believed it was necessary, “I would shut it down, I would listen to the scientists”).

As usual, the Times got defensive, protecting Biden from Trump’s “lies.”

In Wisconsin, he continued to drive home the lie that Mr. Biden spends most of his time in the basement of his Delaware home, saying at one point that “he’s sitting in his basement right now watching us,” and at another point asking, “Does he ever leave Delaware?” In fact, the week before Mr. Trump’s rally, Mr. Biden had traveled to Florida, Michigan, Ohio and Pennsylvania.

It’s undeniable that Biden is a far less visible and far more tentative presence on the campaign trail than his rival, but the "fact checkers" count predictions of the future and humorous mockery as "factual" statements.