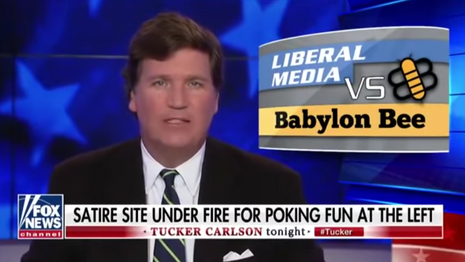 New York Times reporter Emma Goldberg profiled the Christian-oriented satirical website The Babylon Bee on Monday and revealed that the liberal media can’t quite get their brains around the concept of conservative humor: “By Lampooning Liberals, ‘Babylon Bee’ Aims to Be ‘The Onion’ of the Right.”

The entire story is couched in humor-impaired suspicion. Goldberg makes a big deal about how the site, after initially going after candidate Trump in early 2016 paper, now makes fun of other politicians and movements as well.

The Babylon Bee, launched in March 2016, is a site made for churchgoing conservatives. It most frequently set its sights on the left: “Liberal Activist Explains Notion Of Tolerance To Man She Just Called A ‘Worthless [Expletive],’” went the typical headline.

Too close to the internal Times "tolerance" squad? The Times is quite particular about who one is allowed to satirize in polite society, and after the Bee staff joke about owning the libs, Goldberg found a humorless Academic Expert on conservative media:

In that vein, the site has taken aim at the Academy Awards and its new representation metrics. The #MeToo movement. The Black Lives Matter protests and Colin Kaepernick. Even the West Coast wildfires.

Nicole Hemmer, a research scholar at Columbia University, sees the appeal of the Bee’s comedic sensibility as in line with the appeal of the president’s own politics. “It maps really clearly with Trump’s conservatism,” she said. “Which is anti-liberalism more so than it is any kind of principled conservatism.”

Keep in mind Hemmer is talking about a comedic website, not a scholarly think tank. No similar question would ever be posed regarding the "principled liberalism" of Saturday Night Live, or The Onion.

Again Goldberg rigs the definitions in favor of the left: Liberals are all about laughs, while the right thrives on rage.

The Babylon Bee, which said it draws more than 8 million visitors a month, is somewhat of an anomaly. In the world of partisan media, the left has tended to dominate humor -- Jon Stewart, Stephen Colbert, Bill Maher -- while the right has favored radio shows fueled by outrage, giving rise to stars like Rush Limbaugh, Michael Savage and Sean Hannity.

So Limbaugh isn’t funny, yet Stephen Colbert is these days? That would be a surprise to both sets of fans.

Goldberg found another Academic Expert to declare conservative comedy a failure because it allegedly punches down.

Some media researchers speculate that conservative comedy often foundered because it took aim at the powerless. “Satire typically punches up,” said Anthony Nadler, an associate professor at Ursinus College, author of News on the Right. “It’s mocking the pretensions of the powerful.”

The hostility dissipated a little near the end. (And the Times at least actually visited Bee headquarters in California, at least to take photographs.)

[Editor-in-chief Kyle] Mann, who identifies as an observant Christian, sees his satire as part of a biblical tradition. He pointed out that the prophets often used mockery to make their points, Whenever the Babylon Bee publishes a headline that later comes true in some form, the staff calls it a “Bee prophecy fulfilled.” A recent example: “CNN criticizes Israel, Arab Leaders for Shaking Hands in the Middle of a Pandemic.” When a television commentator actually did note the lack of social distancing at the ceremony for the Abraham Accords, one Babylon Bee reader tweeted that “CNN’s actual coverage is indistinguishable from Bee satire.”

Goldberg mentioned the notorious fact-checking of an obvious satirical story:

The Bee found itself walking the thin line between satire and fact in 2018, when it joked that CNN purchased an “industrial-sized washing machine for spinning the news.” However obvious it should have been that the comment resided on the satirical side of the ledger, it still led to an awkward vetting by the fact-checking website Snopes and Facebook.

The Bee is now offering subscription plans to build financial stability, partly to compensate if Facebook or Twitter shuts down its accounts.