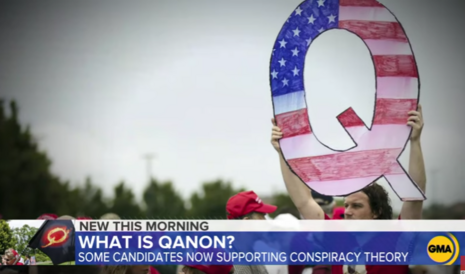 There was the Times’ now-tiresome sleight-of-hand lead that’s not fooling anyone anymore:

Democrats dismissed it as a fringe group of conspiracy-minded zealots. Moderate Republicans fretted over its potential to hurt their party’s image, while more conservative lawmakers carefully sought to harness its grass-roots energy. Sympathetic media outlets covered its rallies, portraying it as an emerging strain of populist politics -- a protest movement born of frustration with a corrupt, unaccountable elite.

Then, to everyone’s surprise, its supporters started winning elections.

That is a description of the Tea Party movement, which emerged in 2009 from the right-wing fringes and proceeded to become a major, enduring force in American conservatism.

But it could just as easily be a description of QAnon, the pro-Trump conspiracy movement that has emerged as a possible inheritor to the Tea Party’s mantle as the most potent grass-roots force in right-wing politics.

The story keyed on Marjorie Taylor Greene, a QAnon acolyte who won a Republican primary runoff in Georgia.

Roose admitted QAnon “followers are internet vigilantes gripped by paranoid and violent revenge fantasies, not lower-my-taxes conservatives or opponents of the Affordable Care Act.” But he still harped on the Tea Party, smearing the movement in retrospect (the paper also smeared the Tea Party at the time.)

But following Ms. Greene’s primary win, some Washington insiders have begun to wonder if QAnon’s potential influence is being similarly underestimated. They worry that, just as the Tea Party gave cover to a racist “birther” movement that propelled conspiracy theories about President Barack Obama into the Republican mainstream, QAnon’s extreme views -- which have led some followers to commit serious crimes -- may prove difficult to contain.

The “birther” rumors about Barack Obama originated among Hillary Clinton supporters during the 2008 primary, as documented here.

Roose threw in a few caveats before making another tawdry link between the limited-government Tea Party movement and QAnon conspiracists.

But there are more parallels than you’d think, especially when it comes to how the political establishments of their times reacted to each group’s rise.

....its followers have routinely used social media to push extreme views -- including opposition to mask-wearing, false fears about child exploitation, and the “Spygate” conspiracy theory -- into conservative media….

By Roose’s standard, the World Health Organization was “extreme” until June regarding wearing of facemasks. And legal inquiries, including the recent "Russiagate" guilty plea by FBI lawyer Kevin Clinesmith, makes the idea behind "Spygate" -- of Obama supporters in national security out to get Trump -- less fanciful then the paper would have you believe.

The similarities between QAnon and the Tea Party aren’t just historical. Some of the same activists are involved in both movements, and organizations like the Tea Party Patriots have provided fodder for QAnon’s social media campaigns, such as a recent viral video of doctors making false claims about Covid-19.

Vanessa Williamson, a senior fellow at the Brookings Institution and co-author of “The Tea Party and the Remaking of Republican Conservatism,” said that QAnon represented, in some ways, an extension of the Tea Party’s skepticism of mainstream authorities.

Roose is notorious for his elaborate front-page smear of YouTube conservatives (The Making of a YouTube Radical – How the Site’s Algorithms Played Into the Hands of the Far Right.”) and his fawning over censorious internet Marxist Carlos Maza and his bullying demonetization of conservative comedian Stephen Crowder.