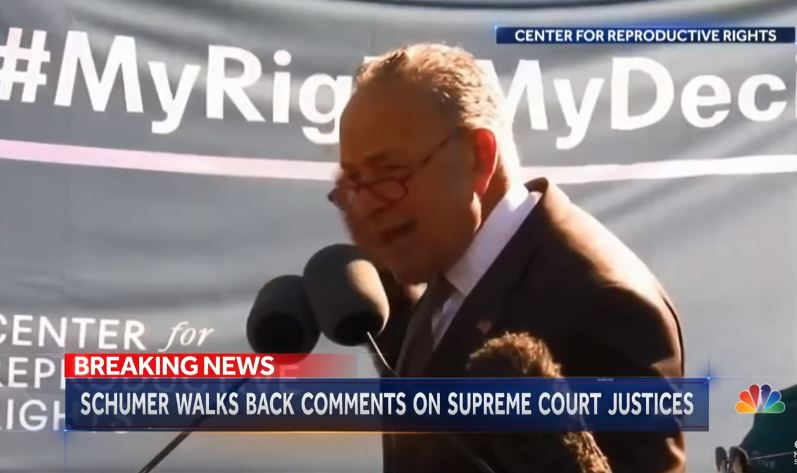 Hulse generally gives Democrats the benefit of the doubt when they make nasty attacks on Republicans, and he similarly shrugged off Schumer’s inflammatory rhetoric at a rally whe he warned Justice Brett Kavanaugh and Justice Neil Gorsuch not to strike down previous pro-abortion rulings by the court.

Under fire from President Trump and Republican senators who accused him of threatening two conservative Supreme Court justices, Senator Chuck Schumer said on Thursday he “should not have used the words” he did on Wednesday in a fiery speech warning of the consequences of their rulings.

But Mr. Schumer, who chalked up his sharp tongue to his Brooklyn upbringing, refused to apologize for the spirit of his remarks, saying that Republicans would pay a political price if the court struck down abortion rights.

“You won’t know what hit you if you go forward with these awful decisions,” he warned on Wednesday at a rally on the steps of the Supreme Court.

That’s not the full quote, which is: “I want to tell you, Gorsuch, I want to tell you, Kavanaugh, you have released the whirlwind and you will pay the price. You won’t know what hit you if you go forward with these awful decisions.”

Mr. Schumer, Democrat of New York and the minority leader, said those remarks were not meant as a threat of bodily harm against the justices, but instead as a warning to Mr. Trump and the Republicans who supported his conservative nominees that they could suffer a political backlash for the decisions the justices made.

His clarification came after Senator Mitch McConnell, Republican of Kentucky and the majority leader, opened the Senate on Thursday with an extended denunciation of Mr. Schumer’s speech....

There was more of Hulse’s trademark table-turning:

.... It was all the more striking because Mr. Trump has aggressively attacked the federal judiciary in public comments and on Twitter, drawing howls of protest from Democrats but little criticism from Republicans.

Democratic officials and their progressive allies said that while Mr. Schumer might have gone too far with his inflammatory words, they were not all that unhappy that the episode put new attention both on the Louisiana case at hand and the Republican push on the courts over all.

Hulse provided some equal time with critical quotes from two Republican senators, but concluded wtih a quote in support of Schumer.

Mr. Schumer had his defenders, including Senator Richard J. Durbin of Illinois...What troubled him, Mr. Durbin said, was that Mr. Trump dared to criticize the senator.