NYT Changes Subject From Anti-Semitic Omar: 'Is AIPAC Too Powerful?' 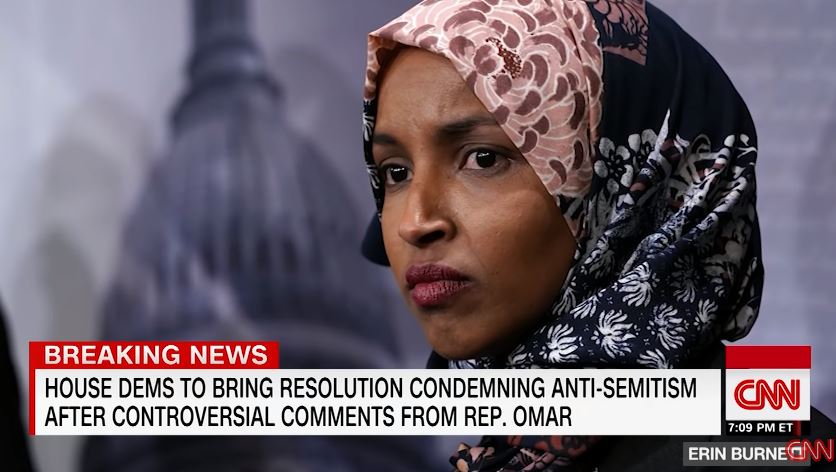 Just raising questions? Reporter Sheryl Gay Stolberg was concerned about the ramifications of the latest (it’s hard to keep track) anti-Semitic controversy around new Democratic Rep. Ilhan Omar. But it’s not concern over Omar’s latest offensive statement, in which she said during a friendly interview at a left-wing D.C. bookstore that Israel activists “push for allegiance to a foreign country.”

Instead, Stolberg is concerned that Omar is right about the harmful and outsized power wielded by the pro-Israel lobbying group American Israel Public Affairs Committee (AIPAC): “Concerns Raised Over Power Wielded by a Pro-Israel Lobbying Giant.” The text box: “A congresswoman’s comments revived a fraught debate.” The online headline to the 1900-word story was more bluntly offensive: “Ilhan Omar’s Criticism Raises the Question: Is Aipac Too Powerful?”

Instapundit placed that online Times headline against a tweet from the Twitter feed of arch-racist David Duke (“How the Israel lobby controls America”) and invited readers to tell the difference.

Stolberg, who has shown herself willing to change the subject for the new congresswoman from Minnesota, tried to see things from Omar’s twisted perspective.

Alarmed by messaging that he saw as anti-Semitic and by Ms. Omar’s support for the boycott-Israel movement, Mr. Fiske, a longtime activist with the American Israel Public Affairs Committee, began texting and calling his friends in Congress to complain. He is hoping Aipac activists will punish Ms. Omar, a freshman Democrat from Minnesota, with a primary challenge in 2020.

On Wednesday, House Democratic leaders will mete out one form of punishment: Spurred by outrage over Ms. Omar’s latest comments suggesting that pro-Israel activists “push for allegiance to a foreign country,” they will put a resolution condemning anti-Semitism on the House floor.

Stolberg spun the topic away from the question of Omar’s anti-Semitism, changing the subject from Omar’s anti-Jewish paranoia to AIPAC’s relative lobbying power which has apparently skewed American policy toward Israel toward the reflexive hard right. As if finding fault with AIPAC would somehow justify Omar’s rants about Israel “hypnotizing” the world, accusing American Jews of dual loyalty, and claiming Congress only supports Israel because of the Jewish “Benjamins” thrown around by AIPAC.

But the swirling debate not only around Ms. Omar but also around broader currents buffeting the Middle East has forced an uncomfortable re-examination of the questions that she has raised: Has Aipac -- founded more than 50 years ago to “strengthen, protect and promote the U.S.-Israel relationship” -- become too powerful? And with that power, has Aipac warped the policy debate over Israel so drastically that dissenting voices are not even allowed to be heard?

That bit about no "dissenting voices" is laughable, given that pro-Palestinian, anti-Israel assertions can be found at least three times a week in the paper’s opinion pages.

Those questions have grown louder with the controversy around Ms. Omar and will grow louder still in the run-up to this month’s annual Aipac policy conference -- a three-day Washington confab that is expected to draw more than 18,000 people, including Prime Minister Benjamin Netanyahu of Israel and leaders of both parties in Congress. To critics, Ms. Omar had a point, even if it was expressed with unfortunate glibness. Aipac’s money does have an outsize influence.

Stolberg admitted that AIPAC, for all Omar’s obsession, doesn’t even endorse or raise money for races. Their actions don’t seem overly sinister.

Aipac’s secret has always been an impressive system of “key contacts,” local volunteers -- preferably friends, community leaders or former classmates of lawmakers -- assigned to cultivate each senator and House member.

Aipac activists say the work they put into building relationships -- more than campaign contributions -- is responsible for the organization’s success.

She reached back 35 years ago to show AIPAC having success in ousting a PLO supporting Congressman as some kind of proof showing AIPAC “as an organization not to be trifled with,” then noted “Aipac spent $3.5 million last year on lobbying.”

In contrast, the National Education Association (the largest teachers union) spent just a shade under $5 million on lobbying in 2018, without being attacked as overly powerful in the New York Times.

But the increasing willingness of Democrats like Ms. Omar to accuse Israel of human rights abuses -- coupled with the far-right policies of Mr. Netanyahu and his embrace of President Trump -- is challenging Aipac’s claim to bipartisanship. Some liberal Democrats, including young Jews, are abandoning the organization.