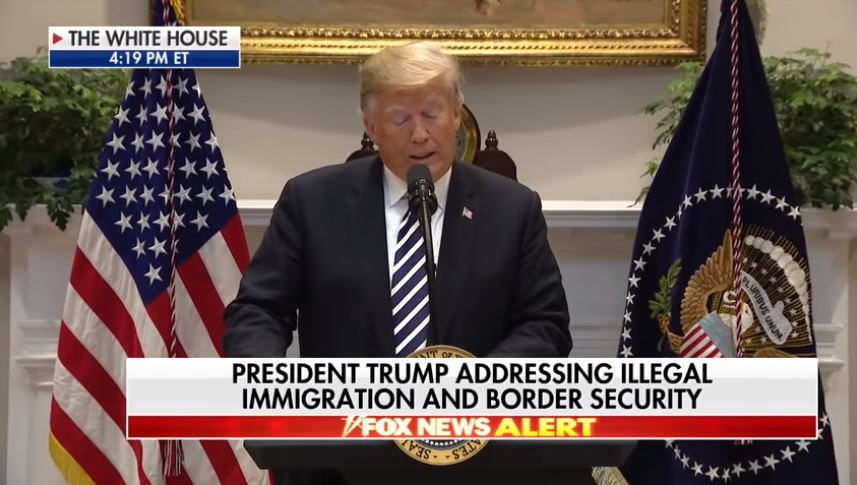 With elections fast approaching, Friday’s New York Times was packed with accusations of President Trump as a racist and hostile to immigrants, most intensely in the lead story by Michael Shear and Julie Hirschfeld Davis. The headline deck: “Trump Invoking ‘Crisis’ at Border As Voting Nears – Message For Midterms – A Presidential Theme Is Built Around a Fear of Immigrants.”

Illegal immigrants, actually, but don’t count on the Times to ever clarify.

Immigration has been the animating issue of the Trump presidency, and now -- with the possibility that Republicans could face significant losses in the midterm elections on Tuesday -- the president has fully embraced a dark, anti-immigrant message in the hope that stoking fear will motivate voters to reject Democrats.

In a rambling speech on Thursday afternoon that was riddled with falsehoods and vague promises to confront a “crisis” at the border, Mr. Trump used the official backdrop of the White House to step up his efforts to demonize a caravan of Central Americans that has been making its way through Mexico, assail Democrats, and promote a vision of a United States that would be better off with fewer immigrants.

He repeated his oft-stated, misleading description of the situation south of the border, saying that “large, organized caravans” are heading toward the United States, filled with “tough people, in many cases.”

The reporters stuck up for the Democrats.

“Democrats want to spend your money and give away your resources for the benefit of anyone but American citizens,” he charged falsely, crystallizing his fear-mongering closing message: “If you don’t want America to be overrun by masses of illegal immigrants and massive caravans, you better vote Republican.”

Still, the president’s dark rhetoric has clearly put some Democratic candidates on the defensive, especially in conservative states where Mr. Trump won by wide margins in 2016....

But details aside, Mr. Trump is betting that a relentless focus on the threat he envisions from immigrants crossing the Mexican border, combined with his repeated assertion that Democrats are to blame for letting them into the country, will energize conservative supporters. And he is hoping that the dark imagery will not alienate suburban voters -- especially women --who have already been abandoning Republicans in droves.

It is a risky bet. Last year, the Republican candidate for governor in Virginia lost after running dark ads warning of the dangers of marauding MS-13 gangs in the state. And the president’s determined effort to shift the conversation away from issues like low unemployment, tax cuts, conservative Supreme Court justices and reduced regulation has worried many Republicans.

The president amplified his fear-peddling Wednesday night with an online video that is being widely condemned as racist, showing a Mexican man convicted of killing two California deputies with a voice-over saying “Democrats let him into the country.”

Thrust into a marquee race in a purple state, however, Mr. DeSantis floundered.

In a Fox interview the day after the Aug. 28 primary, he said electing Mr. Gillum, 39, could “monkey this up,” which Democrats denounced as a racist dog whistle. (Mr. DeSantis denied that.) News reports exposed how far-right extremists were among the organizers and attendees of some of the conferences he frequented. A white supremacist group targeted Mr. Gillum with offensive robocalls. A campaign contributor apologized for referring to former President Barack Obama with a racist slur, but Mr. DeSantis declined to return his donation.

Mr. DeSantis managed to regroup from that rough start. But the controversies have cast a shadow over his campaign.

Thanks to outlets like the Times. They weren’t done making links to conservative figures they found distasteful:

During the candidates’ last debate, Mr. DeSantis angrily rejected a question about his ties to a conservative author, David Horowitz, who has made incendiary statements.