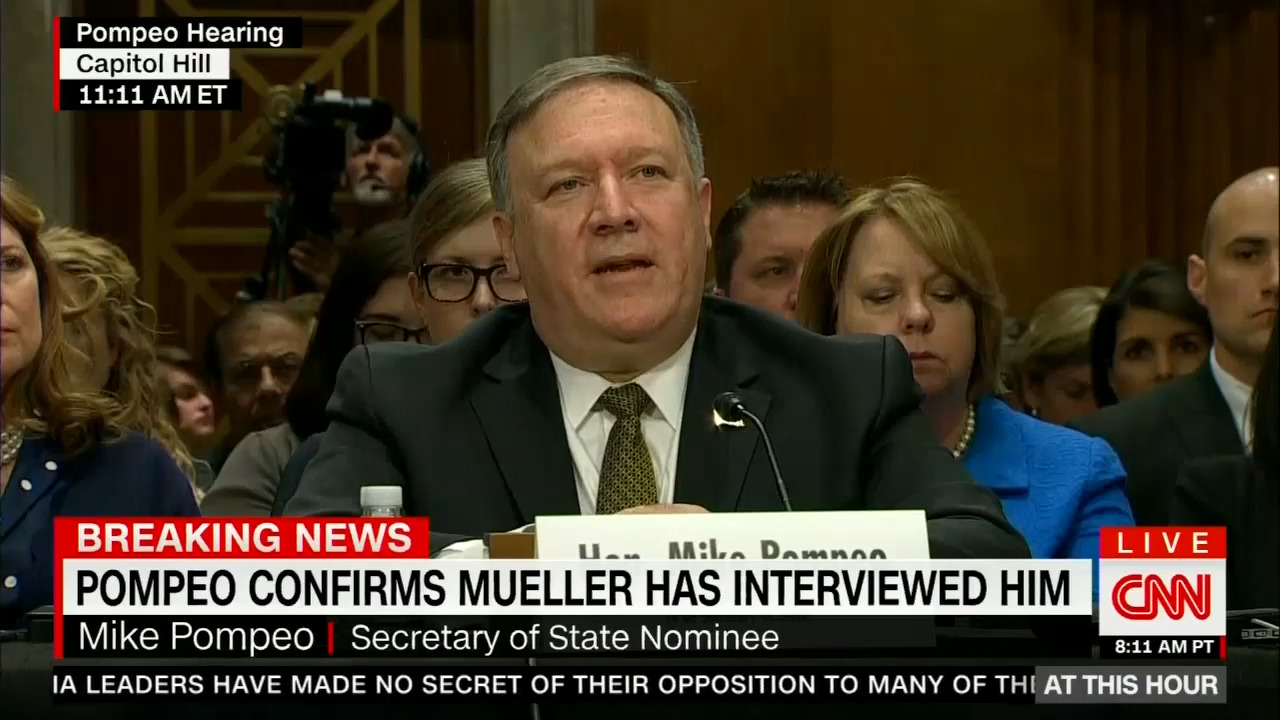 The paper also proved it has yet to forgive Pompeo for being tough on former-Secretary of State Hillary Clinton during the Benghazi hearings in 2015:

President Trump has in his first year marginalized American diplomats, sought to slash the State Department’s budget and reversed crucial pieces of his predecessor’s economic and diplomatic opening to Cuba. But Mike Pompeo promised on Thursday to reverse nearly all of that if he becomes the next secretary of state.

In five hours of testimony before the Senate Foreign Relations Committee, Mr. Pompeo, now the C.I.A. director, said he was hoping for a diplomatic solution to the North Korean nuclear crisis, still believed that the Iran nuclear deal could be saved, disagreed with the president’s assertion that poor relations with Russia had been caused by the special counsel’s investigation and, perhaps most remarkably, promised to defend gay rights around the world.

He was voluble, charming and gracious, which meant he was the opposite of how he had presented himself during the 2015 Benghazi hearings, the last time he had the nation’s attention. Then, he was the scowling, scathing attack dog hounding Hillary Clinton. On Thursday, he smiled throughout the hearing, occasionally even agreeing with Democrats.

His testimony in both tone and substance was so different from his past statements and profile as a Tea Party congressman from Wichita, Kan., that Democrats on the committee were left puzzled and, almost despite themselves, delighted. Gone was any hint of the warmonger his critics have portrayed him as.

In a week when Mr. Trump issued a fusillade of tweets about Syria, Russia and China that set a new standard for contradictory and inconsistent policy positions, the senators asked whether Mr. Pompeo would push back against the president’s worst instincts.

Despite some surprising comity, the hearing produced tense moments. Senator Cory Booker, Democrat of New Jersey, asked a series of pointed questions about Mr. Pompeo’s previous denunciations of American Muslim leaders for what he called their “silence” in response to a terrorist attack.

Mr. Pompeo replied that he believed Islamic religious leaders had a particular “opportunity” to denounce terrorism by Muslims, rather than a responsibility.

The senator then pivoted to ask if Mr. Pompeo had denounced anti-Muslim news media personalities he had appeared with, or whether he stood by comments he had made as a congressman that gay sex and same-sex marriage were a “perversion.”

Mr. Pompeo said that he still believed same-sex marriage was inappropriate, but that he supported gay couples in the government. “My respect for every individual regardless of sexual orientation is the same,” he said.

There was once another Secretary of State nominee officially opposed to gay marriage (and had international conflicts of interest to boot), back in 2008 -- but Hillary Clinton sailed through the Senate regardless, and without any controversy over her gay-rights stance from the Times.

The Times buried encomiums to Pompeo at the end:

Two sitting senators and former Senator Bob Dole, the longtime Republican leader from Kansas, introduced Mr. Pompeo to the committee and spoke highly of his credentials.