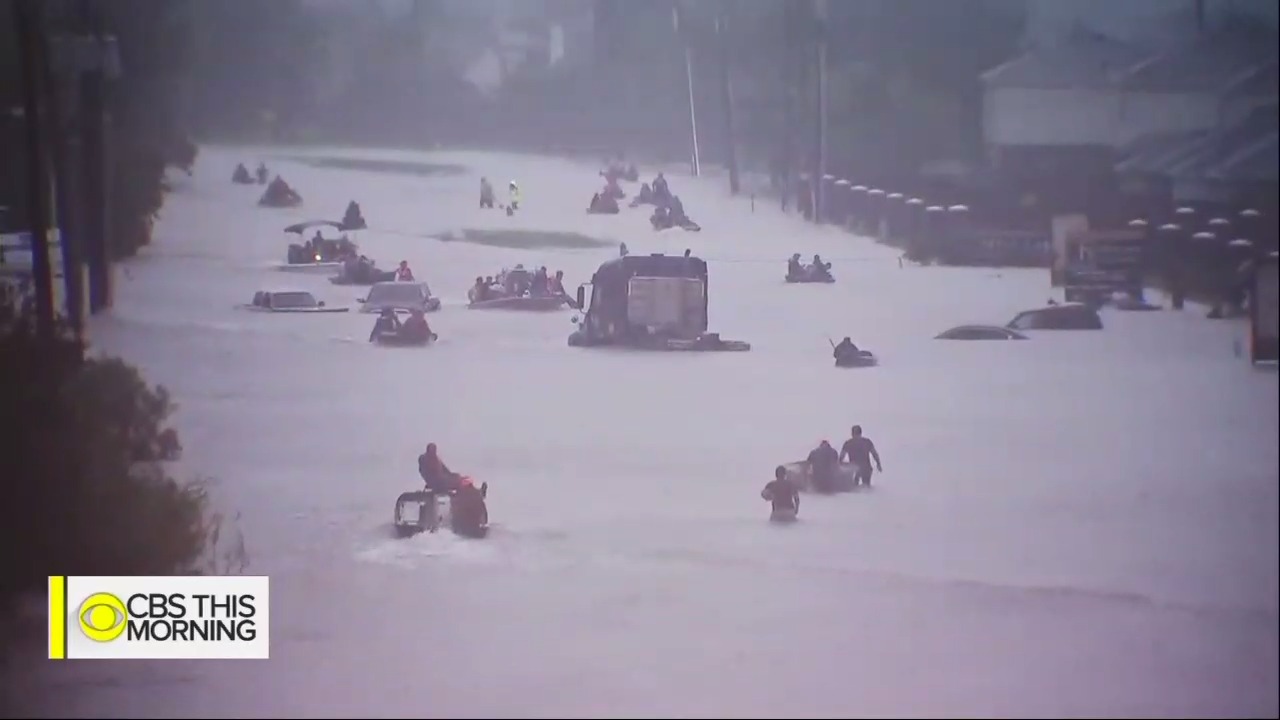 Showing the timeliness and sensitivity it’s renowned for, the political left is using the tragedy of Hurricane Harvey in Houston to excoriate it as an example of an untrammeled free market run amok, and suggests such laissez-faire policies made the damaging storm even more dangerous.

The front page of Thursday’s New York Times featured Manny Fernandez and Richard Fausset's “A Limitless City, Now Envisioning New Limitations -- Progress, With a Price -- A History of Sprawl at Odds With the Forces of Nature.” From that liberal headline you know what's coming. Sure enough Fernandez, who finds Texans “ultraconservative” and shifting “further to the far right,” thinks Houston's free-market policies have doomed it to environmental danger.

Not long after a pair of New York real estate speculators founded this city on the banks of a torpid bayou in the 1830s, every home and every business flooded. Though settlers tried draining their humid, swampy, sweltering surroundings, the inundations came again and again, with 16 major floods in the city’s first century.

And yet somehow, improbably, Houston not only survived but prospered -- and it sprawled omnivorously, becoming the nation’s fourth-largest city and perhaps its purest model of untrammeled growth.

When Hurricane Katrina devastated New Orleans, the disaster played out in an eccentric anachronism, a city of modest economic heft proudly tethered to its exotic past. But Harvey has inundated a city perpetually looking to the future, a place built on boundless entrepreneurialism, the glories of air conditioning, a fierce aversion to regulation and a sense of limitless possibility.

The result has been a uniquely American success story, the capital of the world’s petroleum industry, and the place that sent a man to the moon, built the world’s biggest medical center and became a model of dizzying multiculturalism, with 145 languages spoken.

But Harvey’s staggering flooding is raising very un-Houstonian questions about whether there are, in fact, limits to the Houston model of perpetual growth, and whether humans can push nature only so far before nature pushes back with catastrophic force.

Though its breakneck development culture and lax regulatory environment have been lauded for giving working people affordable housing -- and thus a shot at the American dream -- many experts and residents say that the developers’ encroachment into the wetlands and prairies that used to serve Houston as natural sponges has inevitably exacerbated the misery that the city is suffering today.

The post-Harvey rebuilding drama here is bound to unfold as a frontier nation increasingly faces up to limits -- as southern and western cities mature, as resources are strained by a growing population, and as climate change, exacerbated by Houston’s signature industry, threatens bigger, wetter, ever-more-dangerous storms.

Houstonians felt the impact in June 2001, when Tropical Storm Allison hit Harris County and dumped 80 percent of an average year’s rainfall on the area, killing 22 people and leaving behind 73,000 damaged residences and $5 billion in property damage. Since then, scientists have warned that climate change could produce rainier, more frequent and more damaging storms in the Gulf Coast region, turning what were once minor annoyances into major disasters.

So much for the “more frequent" part. Hurricane frequency has in fact slowed up considerably in recent decades. Fernandez moves right along.

Developers both responded to and fueled the boom, often doing what they wanted in Texas’ relatively laissez-faire regulatory climate. In 2015, the Houston Chronicle examined a sampling of permits issued to developers, and found that more than half the developers had failed to follow through on Army Corps of Engineers directives meant to mitigate the destruction of wetlands.

The reporters finally got around, in the last paragraphs, to how restrictions could ruin what makes Houston great in the first place.

And if the region begins to put stricter regulations on building, there is a chance that one of Houston’s great lures -- affordable housing -- may disappear. This is a concern for Joel Kotkin, the urban theorist and author who has been a great champion of Houston’s lax regulation policies.

“If you put the kind of super-strict planning shackles on Houston, that would be the way to kill it,” he said. “Why would you live in a hot, humid, flat space if it was expensive?”

It started with a recitation of recent flooding in India and other nations, then moved on to Houston and "climate change."

Like the calamity in Texas, these unnatural rainfalls carry two messages. One is the risk of unregulated development. As in Houston, officials in India have paid little attention to the consequences of rapid urban growth in low-lying, watery environments with few natural defenses against a deluge when it comes. And, like Houston, which has suffered floods in the past, Mumbai was hit by severe flooding in 2005 that claimed more than 500 lives, yet it did little to address the issues that made that flooding so deadly.

The second message is that unabated climate change does, indeed, exact a price. Warmer weather heats the oceans, which causes more evaporation, which increases moisture in the atmosphere, which then falls as driving rain. Warmer oceans also rise, partly due to thermal expansion, which in turn threatens low-lying areas; among climate scientists, Bangladesh has for years been the poster child of nations that are likely to face famine, flooding and forced migration as a result of rising sea levels caused by global warming.