NY Times Poses Muslim ‘Feminist’ Sarsour as Target of Right-Wing Hate, But Skips Her Own Hate 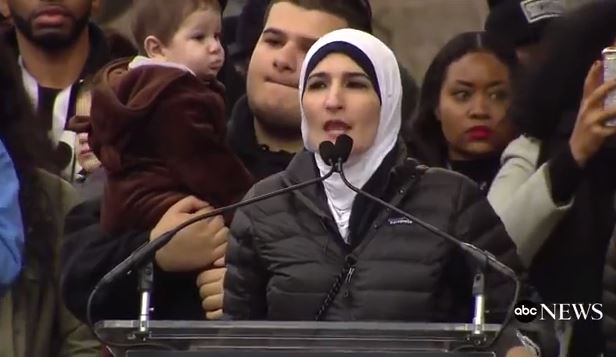 Muslim “feminist” Linda Sarsour has gotten criticism from conservatives for her vulgar, sexist, intolerant remarks about Muslim apostate Ayaan Hirsi Ali (still the target of death threats), as well as her blandished descriptions of Sharia law, and public appearances with convicted terrorists.

Eli Rosenberg profiled her for Saturday's New York Times, before her controversial commencement address at the City University of New York School of Public Health, slated for June 1. The Times went all out to make her a martyr: “A Graduation Speaker Raises Ire Before Taking the Podium -- Threats and Messages of Hatred Flow As Sarsour Plans to Speak at CUNY.” The online headline: "A Muslim-American Activist’s Speech Raises Ire Even Before It’s Delivered.” The caption under a flattering photo of Sarsour: “Linda Sarsour said she became a target of far-right conservatives after the Women’s March. ‘I’m everything they stand against,’ she said.”

One can’t imagine the NYT giving Ann Coulter or Charles Murray the same fawning treatment before they enter the lion’s den of today’s academe.

Not even her recent race-baiting confrontation with a student about it managed to directe the paper’s attention to Sarsour’s disgusting March 2011 Twitter attack on Hirsi Ali and another critic of radical Islam: “Brigitte Gabriel= Ayaan Hirsi Ali. Shes asking 4 an a$$ whippin. I wish I could take their vaginas away -- they dont deserve to be women.”

A particularly vile thing to say about Ayaan Hirsi Ali, a victim of genital mutilation. Sarsour also worked against Hirsi Ali being granted an honorary degree from Brandeis University and called a related documentary about honor killings a “disingenuous” film made by Islamophobes.

But Rosenberg acted blissfully ignorant of that statement and others, focusing on the threats Sarsour says she has received.

Linda Sarsour, one of the most prominent Muslim-American activists in New York, says the messages have been arriving by the hour recently.

Ms. Sarsour, one of the lead organizers of the Women’s March on Washington, has tackled issues like immigration policy, mass incarceration, stop-and-frisk and the New York Police Department’s spying operation on Muslims -- all of which have largely inured her to hate-tinged criticism.

But it is the commencement address she is to deliver next week to about 100 students at the City University of New York School of Public Health that she says has drawn the most hostility and ire she has ever experienced.

“Linda Sarsour is a Sharia-loving, terrorist-embracing, Jew-hating, ticking time bomb of progressive horror,” the conservative media personality Milo Yiannopoulos said at a rally on Thursday outside CUNY’s main office, as protesters held signs with images associated with the often racist and anti-Semitic language used by what is known as the alt-right, a far-right, white nationalist movement.

The controversy over Ms. Sarsour’s appearance is the latest dispute in a heated national dialogue over free speech on university campuses.

Her critics are a strange mix, including right-leaning Jews and Zionists, commentators like Pamela Geller, and some members of the alt-right.

They accuse her of sympathizing with terrorists, supporting Sharia law and anti-Semitism for statements she has made about politics in the Middle East.

The debate about Ms. Sarsour’s speech began last month with Dov Hikind, a conservative Democratic state assemblyman who represents a largely Orthodox community in Brooklyn. Mr. Hikind said Ms. Sarsour should not have been chosen, pointing to her recent appearance in Chicago with Rasmea Odeh, who was convicted in Israel of playing a role in the bombing of a supermarket that killed two civilians in 1969.

Mr. Hikind also pointed to a picture Ms. Sarsour once posted on Twitter of a Palestinian boy standing across from police officers with rocks in his hands. Ms. Sarsour wrote that the photo was “The definition of courage.”

Ms. Sarsour said she had nothing to apologize about for her views.

She said there were questions about the integrity of Ms. Odeh’s conviction many decades ago. The photo of the Palestinian boy was taken during a week when about 200 Palestinians had been killed, she said. And she said she had never planned to speak about Israel in the commencement address.

Ms. Sarsour said she believed she became a target for far-right conservatives in the days after the Women’s March, which she said was evidence of a larger “Islamophobia industry.”

She has hired two private bodyguards to accompany her to public events. She says she regrets that she has not been able to shield her three children, all teenagers, from the vitriol and threats she has received online. Still, she said, she does not plan to be silent.

“I’m Muslim, I’m Palestinian, I’m a woman in a hijab,” she said. “I’m everything they stand against.”

She added, “I have a bigger mission here.”

She’s previously been celebrated in a Times headline as “...a Brooklyn Homegirl in a Hijab.” Reporter Alan Feuer’s flattering day in the life of Sarsour didn’t mention the controversies.