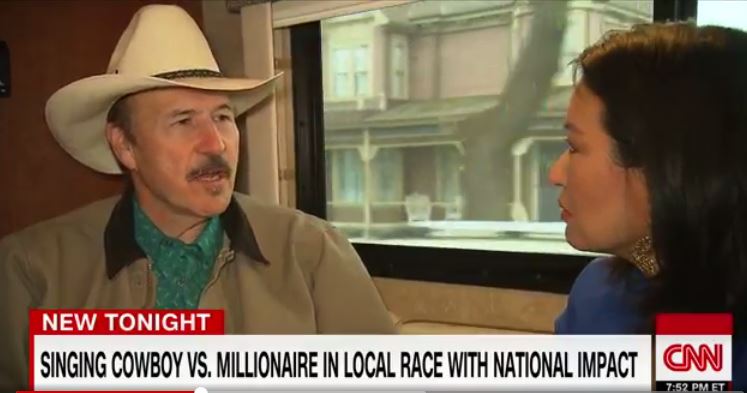 Tuesday’s New York Times reporter Julie Turkewitz, who covers the “Rocky Mountain region” for the paper, is excited about Democratic prospects in a special election for the House in Montana to replace Ryan Zinke, who is serving as Secretary of the Interior under Trump. Her ostensible focus is Republican candidate Greg Gianforte, “Billionaire in Montana, Using Trump’s Playbook.” The online headline added: “What Scandal? In Montana Race, a Republican Is Following the Trump Playbook.” There is no major scandal attached to Gianforte’s campaign, but the headline writer went ahead and conflated them, as well as some silly "Russia ties" to appear more Trumpian.

A multimillionaire with an East Coast education stepped off a campaign jet here recently and took jabs at reporters, pledged to “drain the swamp” and drowned his opponent in insults and punch lines.

The candidate was Greg Gianforte, a Republican running for Congress in Montana’s closely watched special election. But if it wasn’t immediately obvious where he took his political inspiration, Mr. Gianforte spelled it out in five gold-plated letters.

Turkewitz went to great lengths to discredit Gianforte with the silliest kind of “similarities” to Trump:

Mr. Gianforte’s critics are already going after his supposed Russia ties -- he holds about $250,000 in funds that include shares in Russian companies.

Some of the media’s new-found Russophobia would sure have come in handy during the Cold War.

The similarities have struck a chord with Montanans. “I’m voting for Greg. Period,” Nancy Dehler, 69, said in a recent interview. “He’s outspoken. He’s not a politician. And he’s a successful businessman.” She characterized her endorsement of Mr. Gianforte as a push for Mr. Trump’s agenda, including less spending on welfare, a key issue for her. As for the turmoil surrounding the president, she said, “the media is doing everything they can do to lie about him.”

Mr. Gianforte billed himself as a Trump acolyte who will repeal Obamacare, slash spending and open development on the state’s public lands. Mr. Quist said he would fight to protect health insurance, encourage student debt forgiveness and keep drillers off federal acres.

The state runs red and Mr. Trump won here by 20 points in November. But Montanans are famously independent, a tradition strengthened during the days when a copper company ran state politics, fueling a strong labor culture and a distrust of corporations. People here have often refused political labels, split tickets and voted person over party.

A more recent survey suggested that the race may be tightening.

Most critically, the state is among the most federally dependent in the nation: Almost 40 percent of its money comes from Washington. The Trump agenda that Mr. Gianforte promotes could offer mixed results, rolling back regulations that many people say hamper growth, while pulling dollars from small, isolated towns.

The state’s decision to expand Medicaid coverage under Obamacare, for example, made some 70,000 residents eligible for government-funded health insurance and provided rural hospitals with critical infusions of funds. A new plan could shutter hospitals in places where the medical center buoys both health and the local economy. “Repeal of the Affordable Care Act without thoughtfully replacing it would wipe out some of our smaller communities,” Gov. Steve Bullock, a Democrat and a supporter of Mr. Quist, said in an interview. “Montana has only one representative, so it’s important that we get it right.”

Some subtle flattery of the downhome Democrat Quist followed:

While Mr. Gianforte has toured with the president’s allies, Mr. Quist has traversed the state in a rented Winnebago, with a bandmate as his chauffeur. On Thursday Mr. Quist’s campaign said he had raised $5 million, including more than 200,000 contributions averaging just under $24. Over the weekend, Bernie Sanders joined Mr. Quist on the campaign trail.

Quist supporters balked at the idea of another multimillionaire in Washington.

Don't tell them about House Minority Leader Nancy Pelosi! Montana's Democratic Senator Jon Tester, though not among the wealthiest in that august group, isn't in the poorhouse either, with a net worth north of $1 million as of 2010.

The Times tried and failed to push another Democratic candidate, Jon Ossoff, past the finish line in a special election in Georgia earlier this year.