Jeffrey Fleishman, arts and film writer for the Los Angeles Times and its former Cairo bureau chief, waxed insufferably eloquent about the departing President Obama’s oratorical skills in a pandering panegyric on Thursday: 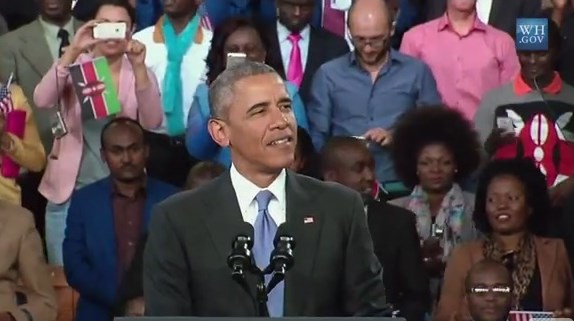 Moments after he was elected as the country’s first black president in 2008, Barack Obama stepped on a Chicago stage and mingled poetry with optimism, praising Americans who were not afraid to “put their hands on the arc of history and bend it once more toward the hope of a better day.”

Whether as candidate or president, Obama knew it came down to words, the way they spun and gathered, lifted and fell on precise beats with restrained flourish. From the moment he electrified the Democratic National Convention in 2004 until his farewell address Tuesday night, his speeches streamed from an eloquent inner voice that could lay bare the vestiges of racism and mourn with a nation stricken by gun violence and the graves of children.

Obama’s legislative legacy may be in jeopardy from President-elect Donald Trump, but the grace of his prose will endure....His sentences soothed and stung, coaxed and challenged, drawing fits from his critics while urging his supporters to seek moral and political transcendence.

His cadence and description created pictures. In his 2009 eulogy for Edward M. Kennedy, Obama seemed to channel F. Scott Fitzgerald, saying the enduring image left by the senator was “of a man on a boat; white mane tousled; smiling broadly as he sails into the wind, ready for whatever storms may come.”

The article was a gathering of Obama sycophants, featuring presidential historians Douglas Brinkley and Robert Dallek -- who called Obama’s speeches “compelling and inspiring....I’d rate him pretty high an as orator. Thomas Jefferson and Abraham Lincoln were very impressive, and so were Franklin Roosevelt and John Kennedy, who had a kind of literary flair.”

Fleischman himself piled on more comparisons

His mastery of syntax and delivery is reminiscent of presidents Kennedy, Reagan and Clinton. But the soul of his sentences -- the resonance, depth and musicality -- hark back to Abraham Lincoln and the Rev. Martin Luther King Jr., with a bit of Nelson Mandela’s sparse stoicism stirred in....

He briefly conceded that the president had speechwriters:

....It was clear from the beginning that Obama, a meticulous re-writer and editor, was in control of his language even as he brought on talented speechwriters including Jon Favreau, who could slip into and articulate his views.

He gave the president a pass on his long friendship with his preacher in Chicago, the radical 9-11 conspiracist Jeremiah Wright, who gleefully spoke of the World Trade Center massacre:

One of his most memorable speeches on race -- “A More Perfect Union” --  was given during his 2008 campaign after excerpts from sermons by his pastor and friend Jeremiah Wright were publicized. Wright, who is also black, blamed the U.S. for its racism, its treatment of Native Americans and, borrowing a quoting from Malcolm X, said that the 9/11 attacks were a sign that “America’s chickens are coming home to roost.”

Obama was urged to disavow Wright, and he later resigned from the minister’s church following other controversial statements by Wright. But he initially responded with comments only a man of his background could have uttered, words that encompassed not only America history but also his own life in that wider, often troubling, story:

Does Fleischman actually think Obama’s own divisive racial rhetoric reflects favorably on his reputation? He eventually addressed the natural comeback: Why, if Obama was such a silver-tongued devil, did the public at large reject his arguments for economic stimulus and government health care?

To be sure, there were times “when his rhetorical gifts failed him,” as E.J. Dionne Jr. and Joy-Ann Reid write in their in the introduction to “We Are the Change We Seek,” a collection of Obama speeches published this month by Bloomsbury....

Lastly, he wrote that Obama called “for unity and optimism to counter economic injustice, racism and our battered and divisive politics” during his farewell address. The same problems Obama’s soaring oratory had somehow left unsolved?