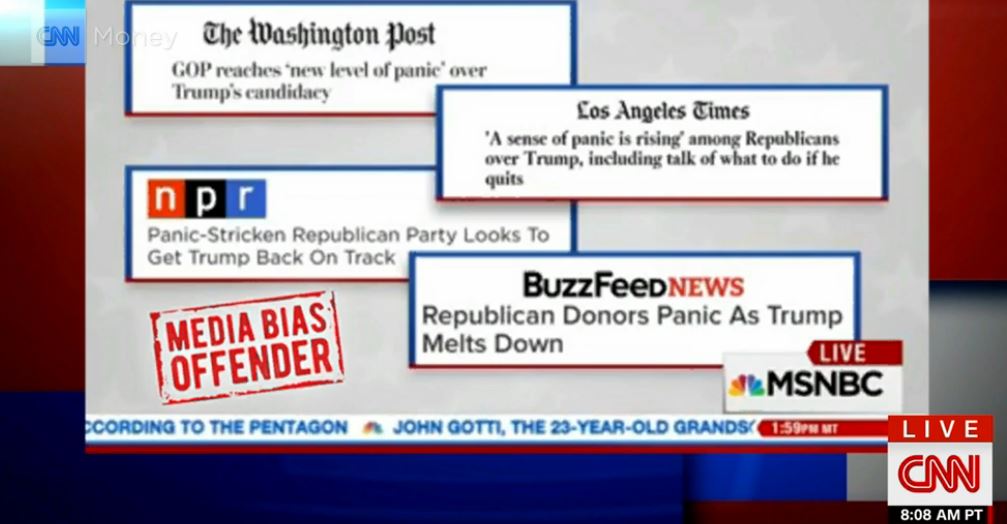 A local paper in central Florida made a surprising strike against national media bias. In an arresting admission, The Daily Commercial of Leesburg, Fla., made a long editorial apology for its ongoing anti-Trump bias, explaining that the wire stories it relies on for political news are hopelessly slanted against Donald Trump: “The media, the election and bias.” The editors observed: "The Daily Commercial hasn't done enough to mitigate the anti-Trump wave in the pages of this paper....you deserve a more balanced approach to the coverage of elections and other weighty issues."

This is less an editorial and more of an open letter to our readers. It's part explanation, part reflection and part mea culpa.

It's about how the media -- including the Daily Commercial -- has covered the presidential election.

Why, you may ask, do we feel the need to broach this topic at this late date in the election? Frankly, an uncomfortably sizable number of our readers have been writing and calling to express their dissatisfaction with what they believe is the media's bias toward Donald Trump, and they are pointed in their criticism of the Daily Commercial, which they believe has gotten swept up in the anti-Trump wave. We felt we owed you a response.

First, it's important to understand that, while the Daily Commercial is a local news organization first and foremost, we also see value in presenting a reasonably comprehensive platter of state, national and international news every day. For months, the contest between Donald Trump and Hillary Clinton has commanded the nation's attention like no other story, so of course that's what we've focused on as well.

....Because we have limited space and resources, smaller papers are generally limited to covering the horse race -- the day in-day out happenings on the campaign trail.

The editorial page had no love for Trump himself, blaming him for having “devoted so much of his air time to saying outlandish things and picking fights with anyone, even his own party, who disagreed with him. He has demonized Republicans and the media, and then he wonders aloud why so many people and institutions have turned their backs on him.”

It's as if a number of national media outlets finally said the heck with it, Trump is a bad guy and we're not going to dance around it any more.

Has the media been biased against Trump? Yes, we believe so, especially lately. Trump's every utterance, no matter how innocuous, is now parsed, analyzed and criticized by a litany of political pundits. The wire services that the Daily Commercial subscribes to churn out stories almost daily that fact check Trump, which is warranted given his penchant for exaggeration and duplicity. Yet those same services turn out so few stories that fact check Clinton, who also has a strained relationship with the truth.

And while hundreds of stories have attempted to shed light on Trump's feelings about women, minorities, his business dealings, his taxes and more, so little has been written about some of Clinton's questionable decisions as secretary of state, her emails and the fact that she and Bill have somehow amassed incredible wealth during their political careers. That certainly deserves scrutiny.

Here's the mea culpa: The Daily Commercial hasn't done enough to mitigate the anti-Trump wave in the pages of this paper. We've tried to be circumspect about the stories we run, the headlines we put on them, the political cartoons we publish (we recently abandoned our usual cartoonists in favor of a service that is not so unrelentingly anti-Trump). Our editors have even re-edited some wire stories that we thought used loaded language to describe Trump. But in retrospect, we haven't gone far enough.

You deserve a more balanced approach to the coverage of elections and other weighty issues.

The Daily Commercial editorial was reprinted in at least one other affiliated newspaper in Florida, the South Lake Press of Lake County.  Both are owned by GateHouse Media, a New York State-based newspaper publisher which puts out over 100 daily papers and over 300 weeklies.