Smug, Leftist Salon Sobs: 'Larry Wilmore's Satire Was Crucial for Our Democracy' in Era of Persecution 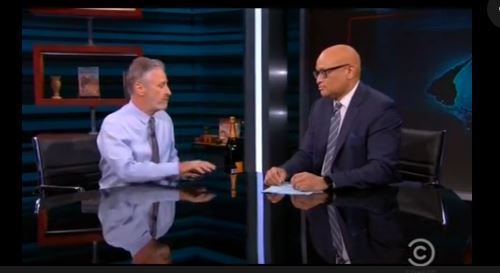 So long, democracy. Larry Wilmore's Comedy Central show got cancelled. No radical hyperbole here! A New York Times critic’s evasive regret over a liberal comedian (Larry Wilmore) losing his liberal talk show (The Nightly Show) was positively narcoleptic compared to the drama over the cancellation at the far-left culture magazine Salon, with a headline ripe for ridicule: “Losing ‘The Nightly Show’ matters: Larry Wilmore’s satire was crucial for our democracy,” especially "in the middle of an election cycle where many segments of our society feel totally disenfranchised, if not outright persecuted."

Lest you think the headline was clickbait, the piece by Sophia A. McClennen, a professor at Penn State, face-planted right out of the starting gate with the same magnificent exaggeration:

This week saw the end of one of the most significant satire news shows in our nation’s history. But if you listened to what Comedy Central said about it, you’d think the show was anything but significant. According to network president Kent Alterman, the decision to cancel “The Nightly Show,” hosted by Larry Wilmore, was made because the show failed to attract young adults and had not thrived on social media: “We hold Larry in the highest esteem, personally and professionally. He brought a strong voice and point of view to the late-night landscape,” Alterman told Variety. “Unfortunately it hasn’t resonated with our audience.”

....When Alterman spoke of the show not “resonating” he revealed his own myopic sense of what it means for a comedy show to have impact. Alterman had the privilege of supporting a show that was making history. While I am sure that Wilmore himself would have been the first to welcome higher ratings, the impact of satire shows cannot be measured solely in total viewers.

McClennen would prefer “satire shows” to be measured into how smart and smug its left-wing viewership is, not whether anyone actually found the satire to be amusing.  She sectored herself into the tribe of self-satisfied, actively-watching brainiacs (unlike those stupid frat boys) and smug liberals that really got what Wilmore was saying.

As Geoffrey Baym explains in “From Cronkite to Colbert,” one of the keys to satire news shows is the creation of an active audience -- one that does not passively swallow the information presented. This means that a show might have smaller total numbers, but can develop deeper connections with the audience. Rather than tune in and giggle at a stupid frat boy joke, viewers of satire are offered real opportunities to engage with what they see.

....Recent studies show that processing sarcasm requires active engagement of “many parts of the brain.” That is why satirical comedy is fundamentally different from comedy that just encourages us to laugh at others and also ourselves.

In an election cycle dominated by racial aggression, the mainstreaming of misogyny, and the denial of structural inequality, Wilmore and his team offered their audience one of the few spaces where these issues could be debated rationally and intelligently. But even more important, those debates took place in the context of satire -- so they were funny, smart and engaging at a time when our country needed that most.

Apparently that was a minority view. Video clips from “Nightly” never went viral on social media, as Jon Stewart’s did, or as John Oliver’s long clips from “Last Week Tonight” continue to do.

Think about it: Where on television can a viewer get a smart and reasoned debate about the merits and risks of the “Black Lives Matter” movement? Not on any of the corporate news channels. It has been the satire news shows that have increasingly filled the news media’s traditional role -- covering issues central to public discourse in ways that are smart, meaningful, productive and, yes, funny.

Perhaps the fact that fans of the show consider “funny” to be an extraneous detail, even for a late-night talk show on a comedy channel, explains why the show failed.

Wilmore’s show was accompanied by John Oliver’s “Last Week Tonight,” Samantha Bee’s “Full Frontal,” and Lee Camp’s “Redacted Tonight.”  Each of these shows has its own angle on political satire -- Oliver enjoying the longer form offered by ad-free HBO to take on major issues, Bee expressing her satirical rage at stupidity and refusing to apologize for her gender, and Camp going after stories of the capitalist oligarchy, political corruption and social injustice that are absent in the corporate news media.

The Nightly Show doesn’t exactly sound like a barrel of laughs, even from McClennen’s position as a fan.

While Wilmore had plenty of African-American predecessors who used satire to expose injustice, bigotry and stupidity, there had never been a show that unapologetically satirized the news of the day centering on issues of race and diversity. This was not identity-based comedy, where the comedian channels habits of one group to point out its follies. This was a political comedy show that covered issues from underrepresented viewpoints. It took the mainstream news and offered a “minority report” on it.

Wilmore’s intended audience was not just viewers from his own identity group -- he aimed to reach any and all viewers tired of structural injustice, microaggressions and stories that blame the victim. This was a show about current issues that refused to accept the dominant narrative, and it came to us in the middle of an election cycle where many segments of our society feel totally disenfranchised, if not outright persecuted.

And yet, despite the fact that Wilmore and his team offered our nation a historic first in satirical comedy, not everyone recognizes their accomplishments.

In an uncanny coincidence, Wilmore’s show wasn’t just cut at the same time that we needed his humor as a foil for the hate-mongering of Donald Trump, it also came in the same week that Malcolm Gladwell released his latest podcast in the “Revisionist History” series: The Satire Paradox. As if anticipating Wilmore’s claim of success, Gladwell argues that satire really can’t have any positive impact.

After smugly informing Gladwell and Comedy Central’s Alterman that their ideas about “political comedy are impoverished and unimaginative and out of touch” and that "They just don’t get it,” McClennen concluded:

Wilmore’s show resonated. It made a difference. Luckily for us, the show might have ended, but the conversation isn’t over.