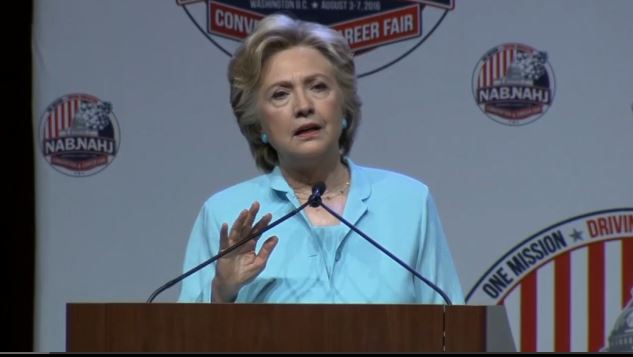 Does the new New York Times Public Editor Liz Spayd gets results? In a Tuesday post, Spayd pondered, under the chiding headline, “The Clinton Story You Didn’t Read Here,” why her paper didn’t cover the latest turn in the Hillary Clinton private server saga. Finally, the Times provided some coverage of the controversy from a joint convention of minority journalists, but misleadingly called it a "press conference" and skipped the laudatory cheers those "objective" journalists gave the Democratic nominee.

Hillary Clinton, in a rare interview on Fox News last Sunday, claimed that the F.B.I. director, James B. Comey Jr., had called her statements about her private email servers “truthful” and said she has been consistent with the American people in her accounts about the controversy. As it turns out, Clinton’s contentions in the interview were misleading, bordering on false.

If you’re getting all your political news from The New York Times, this may be the first time you’re hearing this. Clinton’s remarks were covered by several major news organizations, several of which pointedly challenged the Democratic nominee’s candor. But nothing on the interview ever appeared in The Times, either online or in print.

In the Fox appearance, Clinton was asked by Chris Wallace, the anchor, about previous statements she’s made when questioned on the email controversy, while he played tapes of her past remarks to the public.

“After a long investigation, F.B.I. Director James Comey said none of those things that you told the American public were true,” Wallace said.

Clinton pushed back. “Director Comey said my answers were truthful, and what I’ve said is consistent with what I have told the American people: that there were decisions discussed and made to classify retroactively certain of the emails,” she said.

Spayd noted that the Washington Post awarded her “Four Pinocchios,” the worst truth-telling rating it gives, for statements it classifies as “Whoppers.”

I asked Carolyn Ryan, The Times’s political editor, about the decision not to cover Clinton’s remarks about the email controversy. Here’s how she responded: “It is a subject we have covered aggressively -- especially how her comments compare to what the F.B.I. found -- and will continue to do so.”

Finally, in Saturday's edition, six days after Hillary's false statements, the Times used a Clinton appearance at a joint convention of black and Hispanic journalists to belatedly address the latest controversy. It was at a question-and-answer session featuring a few pre-selected questions, not a full-blown “press conference,” as the NYT’s social media misleadingly put it. Clinton has not held a formal press conference for seven months.

Reporters Yamiche Alcindor and Amy Chozick dutifully provided the filling-in story their Public Editor had hinted at: “Did She ‘Short-Circuit’ On the FBI Inquiry? Clinton Seeks to Explain.”

Mrs. Clinton made the remarks while taking her most extensive questions from journalists in months -- after going more than 200 days without holding a formal news conference.

She has been under fire from Republicans and others since her remarks Sunday on Fox News about her use of a private email server as secretary of state and the resulting F.B.I. investigation. While Mr. Comey did not recommend charges in the case, he said Mrs. Clinton had been “extremely careless” in her use of a private email server and contradicted statements she made about her handling of her email.

“I was pointing out in both of those instances that Director Comey had said that my answers in my F.B.I. interview were truthful,” she said. “That’s really the bottom line here.”

When asked about what Mr. Trump’s millions of supporters, who are often drawn to language she and others have called racist and sexist, says about the electorate, Mrs. Clinton said that while some people were backing the businessman because of his “bigotry,” she acknowledged that many were motivated by economic hardships.

Mrs. Clinton also criticized Mr. Trump on Friday as someone who would be a dangerous president and stressed that if elected, she would work on issues related to systemic racism and the economy that often hit black and Hispanic communities the hardest.

But the Times skipped the laudatory treatment of those supposedly skeptical and objective journalists provided Mrs. Clinton, including NYT's Alcindor, who posted this toughie to Hillary Clinton: “My question is you've accused Donald Trump of using racist and sexist language, what does this say about the electorate so that many Americans are supporting him?”