Ideological double standards on display in the New York Times: While it’s a “dangerous anachronism” for Republicans to appeal to conservatives when picking a vice presidential candidate, it’s apparently absolutely necessary for Democrats to appeal to liberals.

The Times noted the distaste for Hillary's pick, Virginia Sen. Tim Kaine, among the left, but surprisingly also identified Kaine with the left. But it was all good for the "man of deep religious faith" -- and a perfect legislative rating from Planned Parenthood? 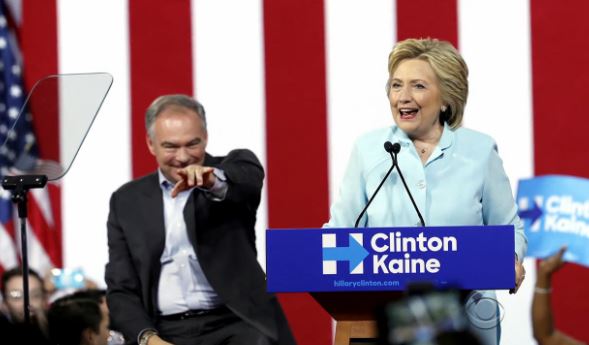 Before the pick became official, Amy Chozick’s report on Hillary Clinton’s choice of Sen. Tim Kaine of Virginia as veep raised red (or at least pink) flags from the left: “Virginia Senator May Not Be Liberals’ First Choice as the Democrats’ No. 2.”

Liberals say they are concerned about Mr. Kaine’s positions on global trade deals and Wall Street regulation....As governor of Virginia, Mr. Kaine appealed to both Democrats in urban pockets and independents in rural areas, and established a reputation as a pragmatic consensus builder.

Is this the same “pragmatic” politician who has earned a whopping 0% American Conservative Union rating after two years in the Senate?

When Hillary made the Kaine pick official on Friday, reporters again griped about what liberals thought in “Clinton Names a Senator As Vice-Presidential Pick – In Tim Kaine of Virginia, a Swing State, Choosing Pragmatic Over Daring.”

While many Democrats swiftly praised the move, some in the party’s liberal wing expressed dismay, claiming that Mr. Kaine was out of step with it on some of its core issues, like trade.

Sheryl Gay Stolberg’s profile, “A Self-Effacing Senator In a Sharp-Elbows Era,” at least edged toward accuracy, labeling Sen. Kaine as liberal despite his “centrist” reputation – then offered fulsome praise to Kaine for epitomizing those same values.

The day after Barack Obama became the first African-American to win the White House, Tim Kaine, then the governor of Virginia, visited a civil rights memorial in Richmond. There, in a former capital of the Confederacy, he summed up the history-making moment in four words.

It was a reference to a former official state song whose slavery-era lyrics -- “this old darkey’s heart” who “labored hard for old massa” -- stood for a history that Mr. Kaine, a Midwest-born, Harvard-educated former civil rights lawyer, abhorred. But Mr. Obama’s six-point victory in Virginia was also, in a way, a parallel of Mr. Kaine’s own success there.

Timothy Michael Kaine, Hillary Clinton’s running mate, is widely described by people in his political orbit as a likable if less than charismatic figure -- “I’m boring,” he conceded on NBC’s “Meet the Press” -- guided by moral convictions that flow from his deep Christian faith. In hyperpartisan Washington, he is often seen as a centrist. He has tangled with Mr. Obama on military and foreign policy, and irritates many progressives with his support for free trade.

Then came a rare sentence in the NYT:

But his calm, even temperament -- when angry, he is apt to say he is “steamed” -- leads to misguided assumptions about his core beliefs. At heart, Mr. Kaine is an old-fashioned liberal, dyed in the wool.

Of course, to the Times, “liberal” represents not soft-on-crime or woolly headed economics, but 100-proof empathy and compassion:

Driven by Jesuit ideals, he represented death row inmates and victims of housing discrimination in Richmond, winning a $100.5 million verdict in a redlining case against Nationwide Insurance (it was overturned on appeal, and his team negotiated a $17.5 million settlement). He was so touched by his clients that Rhonda Harmon, a lawyer who worked with him on the housing case, said she once found him poring over papers at his desk “with tears in his eyes.”

He gets an F rating from the National Rifle Association, but a perfect score from Planned Parenthood, despite his personal opposition to abortion, which he says is a matter of his Roman Catholic faith.

As governor, Mr. Kaine may best be remembered for how he handled trying moments.

Like Gov. Mike Pence of Indiana, the Republican vice-presidential nominee, Mr. Kaine, at his core, is a man of deep religious faith...

In selecting Senator Tim Kaine of Virginia as her running mate, Hillary Clinton is sending the clearest signal yet that she is confident she will win the presidential election.

Mr. Kaine... doesn’t bring obvious political rewards. Mrs. Clinton is likely to win his home state of Virginia in any case. The members of his natural demographic -- white men -- aren’t going to forget their problems with Mrs. Clinton just because Mr. Kaine is on the ticket. And he isn’t a break-up-the-big-banks liberal who will bring home the left wing of the party.

She already has a strong team.

Mrs. Clinton is showing her cards: In her view, she already has a straight flush heading into the fall with President Obama, former President Bill Clinton, Vice President Joseph R. Biden Jr., Mr. Sanders and Senator Elizabeth Warren of Massachusetts ready to campaign for her. She doesn’t think she needs an ace in the hole in November, according to Clinton advisers.

Healy also acknowledged Kaine was a liberal in centrist clothing.

Mr. Kaine is a strong advocate of gun control, opposes the death penalty and favored the Iran nuclear deal. He has also backed some restrictions on abortion and is a strong supporter of Israel. While he holds many progressive views, the fact that he does not come across as a fire-breathing partisan has helped give him a reputation as a moderate. He comes across like the nuts-and-bolts governor and mayor he once was -- perhaps even a little boring -- but it’s a style and approach to governing that won’t upstage Mrs. Clinton.

Among Democrats who know him well, Mr. Kaine is considered a self-effacing workhorse who shuns the spotlight and prefers digging into domestic policy and national security rather than showboating on Sunday news programs....

And on Sunday’s front page, the Times continued to fret about the Kaine pick, seen by some on the left as insufficiently radical, under the headline “Clinton Introduces Kaine, Drawing Roars but Unease.”

Hillary Clinton debuted her running mate, Senator Tim Kaine of Virginia, to boisterous and bilingual cheers here on Saturday, calling him a “progressive who likes to get things done” even as some liberal Democrats began making clear that they were disappointed with her choice.