The front of the National section of Monday’s New York Times featured two race-and ethnicity-charged reports from Minnesota and Virginia, one trying to corrode confidence in three Islamic terrorist convictions of Somalis in Minnesota, the other on a “Racially Charged Fight” over granting blanket voting rights to felons in Virginia, a move expected to benefit the Democratic nominee in November. McAuliffe issued his executive order despite a history of previous Virginia governors who have examined the state constitution and decided they don’t have the authority to do so.

Reporting from Minneapolis, reporters Jack Healy and Matt Furber’s story gave credence to far-left conspiracy theories right in the headline in “Fair or ‘Conspiracy’? Trial Divides Somalis in Minneapolis.”  The story opened with sympathy for the family of one of the convicted terrorists, Mohamed Farah, then summarized:

The trial of his son and two other young Somali-American men splintered families and opinions here in the country’s largest Somali community. Former friends testified against one another, describing how they had watched propaganda videos, bought fake passports and plotted their paths to Syria. Family members squabbled in the halls of the courthouse. Some said they had been threatened or shunned.

When the jury came back on Friday afternoon, Mr. Yusuf did not even get word in time to reach the courtroom to see his 22-year-old son, Mohamed Farah, and the two other defendants, Guled Omar, 21, and Abdirahman Daud, 22, declared guilty. A total of nine men -- including another of Mr. Yusuf’s sons, Adnan -- have been convicted in the case.

The Times dutifully noted that some three dozen young men have left Minnesota to join Islamic militants in Somalia or Islamic State, but that this latest trial and conviction “also opened wounds among families, and at the end of the trial, some in the community praised justice served, while others pointed to what they called another injustice.”

The tone shifted from conspiracy-mongering to plain old liberal soft-on-crime:

But others called the case a setup, and said the defendants had been goaded to act and praise terrorism by a onetime friend who made secret audio recordings as a paid federal informant. In barber shops and cafes where the case flashed on television screens, young men and old said the trial would harden the community’s relationship with law enforcement, and said the defendants did not deserve potential sentences of life in prison.

“People think the trial was dishonest and was done in a hurry, that this is a conspiracy,” said Jamaal K. Farah, 35, a barber and comedian who goes by the name Happy Khalif and has attracted hundreds of thousands of views on YouTube.

But to Mr. Farah and others skeptical of the convictions, the men were not defendants or terrorists, but boys, brothers, kids who had messed up but deserved a second chance.

A second chance to try again?

A friend of one of the convicted (shockingly) didn’t approve of the verdicts and was dutifully quoted:

[Burhan] Mohumed supported the three defendants and, echoing others here, he was upset they could face life in prison even though they never left for Syria and never pulled a trigger. 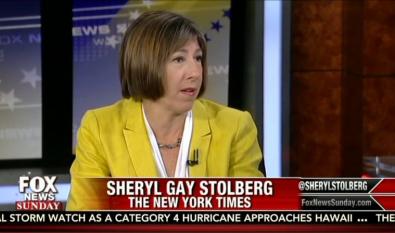 On the same page in print, Sheryl Gay Stolberg played the race card in Richmond, in the aftermath of Democratic Gov. Terry McAuliffe’s inflammatory decision to unilaterally restore voting rights to former felons, “Virginia at Center of Racially Charged Fight Over the Right of Felons to Vote.” The text box warned that “What a governor granted, a State Supreme Court might take away.”

On the night Barack Obama became the nation’s first black president, Leah Taylor, a fast-food worker and African-American mother of six, stayed up until 2 a.m. watching the election returns. “I knew that was history, and I wanted to be a part of it,” she said. But she did not vote.

Ms. Taylor, 45, has never voted. In 1991, when she was 20, she was stripped of her voting rights after being convicted of selling crack cocaine and sent to jail for a year. So she was stunned when an organizer from a progressive group, New Virginia Majority, showed up one recent afternoon at the church soup kitchen where she eats lunch and said he could register her. 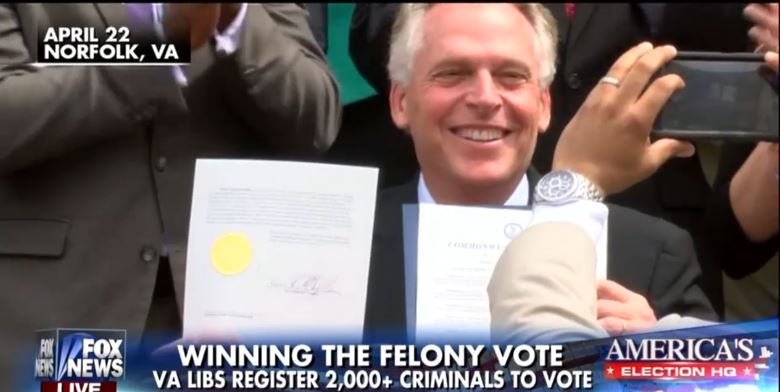 Thus did Ms. Taylor join a wave of newly eligible voters, all with criminal pasts, signing up in Virginia. But what Mr. McAuliffe granted, the Virginia Supreme Court may now take away.

Top Republicans in the state legislature are seeking to block Mr. McAuliffe’s sweeping order, which re-enfranchised 206,000 Virginians who have completed sentences, probation or parole. Last week, the Supreme Court announced a special session to hear arguments in July -- in time to rule before the November election.

The suit has plunged Virginia and Mr. McAuliffe - a Democrat and close friend of Hillary Clinton’s, the party’s likely presidential nominee -- into yet another racially charged voting rights battle. In May, a federal judge upheld a Republican-backed law requiring Virginia voters to provide photo identification, while the Supreme Court let stand a court-imposed redistricting map, drawn to address Democrats’ complaints of racially motivated gerrymandering.

Stolberg noted that “progressive groups have been waging a furious registration campaign” in Virginia.

“This could get really messy,” said Tram Nguyen, an executive director of New Virginia Majority, a leader in the registration campaign. “What happens if the executive order gets overturned? There’s no precedent; 5,800 people are actively on the registration rolls now. Do we purge them?”

That is precisely what Republicans are asking. In addition to overturning the order, they want the new registrations nullified -- a request Ms. Taylor calls “appalling.”

Stolberg eagerly followed Taylor, who “dabbles in advocacy,” on her voter registration rounds. Left-wing advocacy, that is, like a national $15 minimum wage. Meanwhile, Stolberg buried the Republican dissent.

In issuing his sweeping order, Mr. McAuliffe made expansive use of his clemency powers to effectively nullify a Civil War-era provision in the State Constitution that barred convicted felons from voting for life -- one of the harshest disenfranchisement policies in the nation. In an interview previewing his announcement, Mr. McAuliffe said his legal authority to do so is “ironclad.” But Republicans say the governor lacks blanket authority to restore voting rights and must instead do so on a case-by-case basis -- as his predecessors in both parties have done.

Still, race is a powerful subtext; African-Americans make up 19 percent of Virginia’s population, but 45 percent of those covered by the governor’s order. The Sentencing Project, a Washington research organization, says one in five African-Americans in Virginia cannot vote because of felony convictions.