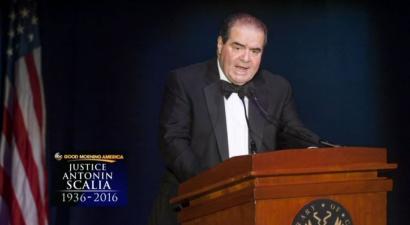 When George Mason University in Virginia announced plans to rename its law school after the late Supreme Court Justice Antonin Scalia, the outrage in liberal academia (to be redundant) was unconfined. Reporter Nicholas Fandos wrote up a credulous report on the one-sided controversy in late April on the left trying to bar Scalia’s name in the name of racial and social justice, while blithely suggesting conservative ideas have no place a college campus.

As NewsBusters noted then, conservatives aren’t all thrilled to have President John F. Kennedy’s name on so many schools and colleges, but neither do they don’t actively work against them in the name of ideological purity. The Times has yet to mention last year's violent harassment of conservative speaker Ben Shapiro when he attempting to give a talk at California State University. Yet any right-of-center nudges anywhere in academia are greeted with panic by the paper.

Wednesday's New York Times had a follow-up by Fandos relaying the grim news that Scalia's name would stay: “University in Virginia Firms Up Plan to Honor Scalia.”

From the lead sentence, Fandos really made the libertarian-leaning university sound like the heavy in this story, deaf to the pathetic pleas of the (unlabeled leftist) students and faculty.

Defying pleas by many of its students and faculty to reconsider, George Mason University moved on Tuesday to finalize the renaming of its law school in honor of Antonin Scalia, the Supreme Court justice who died recently.

(Fandos made the same emphasis on Twitter: “Despite pleas to reconsider, George Mason finalizes name change to Scalia Law School”)

It did so after the State Council of Higher Education for Virginia declined to block the name change, ending for now a debate that has divided George Mason’s suburban Washington campus since the university announced in March the decision to rename the school and the large gift from conservative donors prompting it.

Though it was expected, the decision came as a disappointment to the students and faculty, as well as a dozen or so Democrats in the Virginia legislature, who opposed the name change out of concern that it would tie the university to a conservative justice whose views, they thought, ran counter to its educational mission.

Why so controversial? Perhaps because of the biggest named funder is also one of the lefty’s prime enemies: “The Charles Koch Foundation” will be funding scholarships and new faculty positions at the GMU law school.

The Times hinted at a racial dog-whistle argument that it didn’t have the guts to elucidate.

Opponents of the renaming agree, though they argue that the changes will not be for the better, signaling to potential students of diverse backgrounds that George Mason is not welcoming to them.

What kind of “diversity” is he talking about? Certainly not political diversity. Elite colleges have for years made it clear that conservatives are not welcome, but the Times has never found that a problem worth a story.

It is less clear what effect Tuesday’s decision will have on the increased scrutiny the gifts have prompted among faculty members over the influence conservative donors -- chiefly Mr. Koch, the billionaire industrialist who has given tens of millions of dollars to pet projects there -- have on Virginia’s largest public university.

Fandos seemed to sympathize with the Democrats who wanted to squelch any reminder of conservarism in the halls (or on the walls) of academe.

As for the name change, those who had tried to block it said they were resigned on Tuesday, if dissatisfied with the state’s inability to regulate such changes.