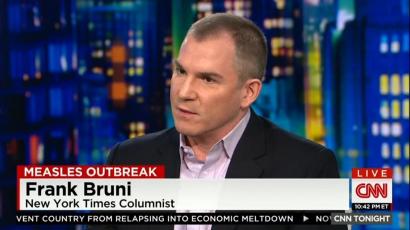 After Hillary Clinton won four of five East Coast primary contests on Tuesday night, the New York Times seems to be trying not so subtly to ease far-left Bernie Sanders out of the race and clear the path for Hillary Clinton to waltz to the Democratic presidential nomination. Besides the front-page report on Hillary turning her sights to the fall campaign, Frank Bruni's column was titled "The Cult of Sore Losers," while Paul Krugman continued his surprising and sarcastic anti-Sanders crusade: "But never mind. As you know, I’m only saying these things because I’m a corporate whore and want a job with Hillary." Bruni still had time to call Ted Cruz "the Don Quixote of extreme conservatism."

Wednesday’s front-page story by Amy Chozick and Alexander Burns pretty much declared game over: “Pulling Away From Sanders, Clinton Turns Sights to the Fall.”

After months of trying to sideline an unexpectedly deft and well-financed liberal opponent, Hillary Clinton on Tuesday won a series of primaries that freed her to present herself as the de facto victor of the Democratic nominating fight and gave her the impetus to shift focus decisively toward the November election....After a landslide win in New York last week, Mrs. Clinton had already begun to treat Mr. Sanders as a greatly diminished threat, concentrating her fire on Mr. Trump and, to a lesser degree, Senator Ted Cruz of Texas. Her victories in Pennsylvania, Maryland, Connecticut and Delaware on Tuesday will only accelerate that shift.

Frank Bruni’s harsh column swept both Ted Cruz and Sanders into “The Cult of Sore Losers.” While trying to push Sanders out, Bruni, a former White House reporter for the Times, was vicious against Cruz, terming him “the Don Quixote of extreme conservatism.”

Bernie Sanders isn’t losing. Just ask many of his backers or listen to some of his own complaints. He’s being robbed, a victim of antiquated rules, voter suppression, shady arithmetic and a corrupt Democratic establishment. The swindle includes the South’s getting inordinate sway and the poor none at all. If Americans really had a voice, they would shout “Bernie! Bernie! Bernie!” until too hoarse to shout anymore.

Donald Trump isn’t winning. Just ask Ted Cruz, by whose strange and self-serving logic it is “the will of the people” (his actual words) that he and John Kasich collude to prevent Trump from amassing a majority of delegates so that some runner-up with less demonstrable support can leapfrog past him to become the Republican presidential nominee. Democracy in action!

I agree that Trump’s nomination would be frightening. I disagree that Cruz’s would be better. It certainly wouldn’t be more justified, but such rational thinking has gone missing in this year of losing gracelessly.

Bruni, a former White House reporter, put his left thumb on the scale as he rehashed old Washington battles.

But an epoch of unrelieved mutual suspicion between competitors -- and especially between Republicans and Democrats -- took hold somewhere on a timeline that runs through Watergate; the confirmation hearings of Robert Bork and Clarence Thomas; the serial investigations into the Clintons; and Mitch McConnell’s vow to thwart President Obama at every turn.

In the midst of that came Bush v. Gore, in which a majority of Republican appointees on the Supreme Court decided a presidential election in the Republican candidate’s favor.

When you’re the Don Quixote of extreme conservatism (Cruz), you can never ditch your armor. And it’s easy to tell yourself -- because it’s easy for all of us to tell ourselves -- that surrendering to Trump is surrendering your patriotism.

Checking in with another surprise Bernie Sanders-basher, columnist Paul Krugman on Monday took another jab at Hillary’s opponent on his nytimes.com blog, saying his opposition to soda taxes is a sign of desperation. Krugman finds the “Bernie Bros” to be quite personal and vicious in their attacks, while assuming bad faith on the part of political opponents. Sound familiar?

So Sanders and Clinton are arguing about soda taxes -- Clinton for, as a way to raise money for good stuff while discouraging self-destructive behavior, Sanders against, because regressive. I have no illusions that rational argument will make much difference in the short run; we’re in that stage where anything Clinton supports is ipso facto evil. It’s like that point in 2008 when Obama supporters hated, hated the individual mandate that eventually became, as it had to, a central piece of Obamacare.

If we add in the reality that heavy soda consumption really is destructive, with the consequences falling most heavily on low-income children, I’d say that Sanders is very much on the wrong side here. In fact, I very much doubt that he’d be raising the issue at all if he weren’t still hoping to pull off some kind of political Hail Mary pass.

Krugman really let the left-wing Sanders have it in a previous post for being smugly dismissive and intolerant of political opponents (again, a personality type Krugman should be well acquainted with):

Today’s column offers an opportunity to say, for the record, why I haven’t been the Bernie booster a lot of people apparently expected me to be. For the business about discounting Clinton support as coming from “conservative states” in the “Deep South” actually exemplifies the problem I saw in the Sanders campaign from the beginning, and made me distrust both the movement and the man.

I know some people think that I’m obsessing over trivial policy details, but they’re missing the point. It’s about an attitude, the sense that righteousness excuses you from the need for hard thinking and that any questioning of the righteous is treason to the cause. When you see Sanders supporters going over the top about “corporate whores” and such, you’re not seeing a mysterious intrusion of bad behavior into an idealistic movement; you’re seeing the intolerance that was always just under the surface of the movement, right from the start.

But never mind. As you know, I’m only saying these things because I’m a corporate whore and want a job with Hillary.