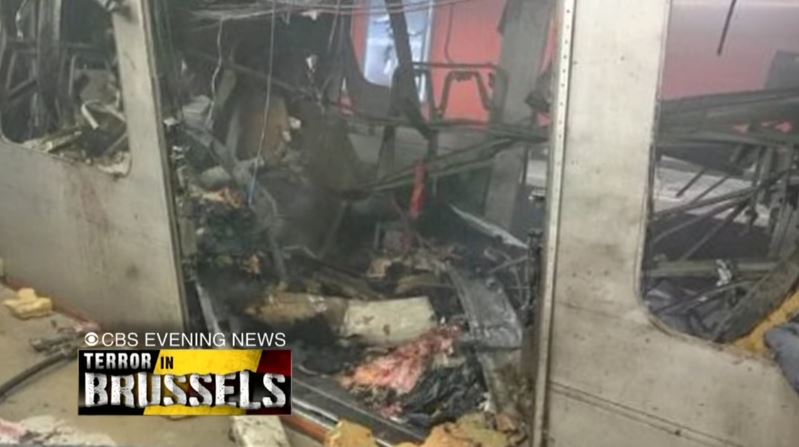 Americans woke up to horror -- the deadly bombings in Brussels, for which Islamic State has claimed responsibility. It comes a few days after alleged terror mastermind Salah Abdeslam was captured in Molenbeek, a no-go-zone neighborhood of Muslim immigrants in Brussels.

Even after the capture, there were ominous hints about Brussels’ continued vulnerability in Tuesday’s New York Times, in a story by Alissa Rubin which went to press before the latest terror in Brussels: “Paris Suspect’s Arrest Ends Manhunt, Not Questions.” Yet Rubin still managed to downplay the insular, hostile, terrorist-breeding ground nature of Brussels’ Molenbeek neighborhood. And a new sanctimonious editorial on anti-Muslim "xenophobia" was tougher on Republican politicians than the actual terrorists.

In Molenbeek’s teahouses, it is hard to get anyone to say much about Mr. Abdeslam or his capture. Men walk outside rather than speak to outsiders.

That does not make them jihad supporters, said Mr. Leman, the anthropologist. “Even if they disapprove of what someone did in family,” he said, “they feel it should be dealt with internally.”

Something is rotten in Belgium beyond neighborhood omerta. But don’t talk about “no-go-zones,” or the Times and the rest of the media will give you a sanctimonious lecture about Islamophobia.

In fact, the thin-skinned Times devoted a full defensive report in January defending Brussels from Donald Trump after he called the city a “hell-hole” during a discussion of the Islamic massacres in Paris. The paper conveniently downplayed the reason he did so: The failure of Muslims there and in other European cities to integrate.

Asked by the Fox Business Network anchor Maria Bartiromo about the feasibility of his proposal to bar foreign Muslims from entering the United States, Mr. Trump argued that Belgium and France had been blighted by the failure of Muslims in these countries to integrate.

Warming to his theme, he added that Brussels was in a particularly dire state. “You go to Brussels -- I was in Brussels a long time ago, 20 years ago, so beautiful, everything is so beautiful -- it’s like living in a hellhole right now,” Mr. Trump continued.

Belgium fought back with the deadly weapons of hashtags and irony.

Before long, the hashtag #hellhole was gaining traction on Twitter as Belgians lashed out at Mr. Trump, deploying an arsenal of insults, irony and humor, including images of Belgium’s beloved beer and chocolate.

The Times strained to soft-pedal Brussels’ weakness and capitulation in the face of Islamic radicalism.

Belgium has come under scrutiny for failing to tame growing radicalization. Éric Zemmour, a French writer, recently suggested in an interview that rather than bombing the Islamic State’s self-declared capital of Raqqa, Syria, France should bomb Molenbeek, the working-class district in Brussels where several of the Paris attackers lived.

In an editorial, “Standing With Brussels Against Terrorism and Fear," the editors insisted that fighting terror “emphatically does not mean hysterical fearmongering of the sort promptly voiced by politicians like Donald Trump.” It was tougher on Republican politicians than the actual terrorists:

The impulse after a barbaric attack is always to rein in civil liberties and freedoms. In the United States, the Patriot Act hurriedly enacted after the attacks of 9/11 led to abuses of the surveillance powers granted to the government. The French government declared a controversial state of emergency hours after the Paris attacks in November, which has been extended into May. In the wake of the Brussels attacks, Mr. Trump was quick to renew his calls for keeping Muslim refugees out of America and for a revival of torture, while his rival Senator Ted Cruz called for police patrols in Muslim neighborhoods in the United States.

As usual, the Times is distressingly vague about what it would have society do to fight terror, while excelling at sanctimoniously huffing about what we must not do:

But such measures only serve the terrorists’ end, which is to weaken Western society by spreading fear and panic, turning citizen against citizen, feeding xenophobic sentiments and further alienating and radicalizing Muslim youths. Changes to security, policing and investigative practices are necessary, but they must be made cautiously, after serious debate and with due regard for civil rights and the law....But the response to terrorism must also be a reaffirmation of core democratic values and a rejection of demagogues and xenophobes who would exploit public fears and tears.