Mary Claire Kendall is a Washington-based writer who's written on Hollywood for Forbes and for Breitbart. I recently heard her speak on her new book about Christian faith and movie stars titled Oasis: Conversion Stories of Hollywood Legends. It provides intimate portraits of stars who came to faith after struggles with alcoholism, infidelty and other problems – including legends like John Wayne, Gary Cooper, Spencer Tracy, Patricia Neal, and Bob Hope. She recently took the time to answer a few questions for NewsBusters: 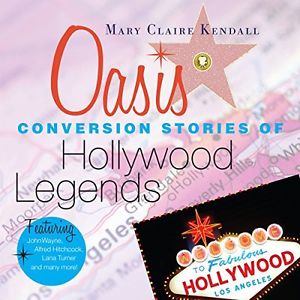 In Hollywood's Golden Age, the stars did not really run the show. Moguls like Louis B. Mayer, Adolph Zukor, Cecil B. DeMille, and the Warner Brothers did, along with star directors like John Ford, Frank Capra, and later Alfred Hitchcock. While Zukor complained those who called for moral standards were "picking my pocket," his fellow immigrant Mayer wanted to make good films, decent films, films that the whole family could enjoy.  But mostly, like today, these immigrant moguls wanted to make money.

In the golden age, to make money, they catered to uncomplicated and patriotic tastes of the Great Depression and World War II -- featuring many of the stars I write about in my book Oasis. Today as the culture has become more libertine, filmmakers have sought to cater to the resulting less elegant tastes and what you get is a less elegant culture that is a far cry from Breakfast at Tiffany's, made as the golden age was coming to a close.

2. How did being conservative in Hollywood go from being unexceptional to being almost unheard of?

Hollywood used to be a den of conservative Republicans. It still is to a certain degree. Stars like Kelsey Grammer, Jon Voight, Patricia Heaton, Lara Flynn Boyle [are] all proud Republicans. But, of course, it was much more fashionable during the Golden Age. Many Hollywood insiders belonged to the Grand Old Party. People like Mary Pickford, Mayer, DeMille, the Warner Bros. And many stars, as well, many of whom I write about like Gary Cooper, Bob Hope, Mary Astor, John Wayne, Ann Sothern, Jane Wyman, Susan Hayward, Lana Turner, Ann Miller, and Patricia Neal all considered the GOP their political home. Now if they would only look at their paychecks and the tax bite, as my friend Rob Long says, they would be conservative. But, it's more a phenomenon of Hollywood mirroring the culture and vice versa.

3. What factors cause celebrities to convert to Christianity?

With respect to the stars I write about in my book, it's usually some crisis in their lives that brought them face to face with their human weakness and the need for God. And then God put someone in their path who enabled them to receive His healing grace. It's just as simple as that. It's really a beautiful story repeated over and over again.

4. What are some of the most dramatic conversion stories you report in your book and how were these conversions viewed by Hollywood at the time?

I think one of the most dramatic has got to be the Betty Hutton story. She was following in the same path as her good friend Judy Garland. She was down to 88 pounds, terribly addicted to prescription pills with no desire to live. And then she was at this rehab -- I think it was Greyrock up in Massachusetts-- and this gentle priest, Father Peter McGuire, was checking in his bombed cook and she was so captivated by how holy he seemed and she said to herself -- she just got this flash out of the sky-- he's going to save my life. And he did. It was amazing. All the stories are amazing but that story is just incredible.

And regarding how they viewed her conversion at the time, when they found out she was in the rectory, the press descended upon that rectory in Portsmouth, Rhode Island, where she was serving as a cook, staying on the this floor, in the attic -- she was just getting back on her feet, she was a mess, her life had just spun out of control-- and the press just made a big to-do and it caused her to have a nervous breakdown and it extended her convalescence.

But in terms of how they viewed the other conversions, like with Gary Cooper…it was reported matter-of-factly by Ruth Waterbury in Motion Picture Magazine.

It is a private thing. I don’t think converting to Christianity would necessarily be a career enhancer. Except inasmuch as you’ll read these stories and see how so many of these stars actually grappled with real weaknesses like addiction. And so I would have to think, I would have to hope, that seeing how anything that would help a star get control of their lives, I think would have to be a source of respect.

5. What is the future of Christianity in Hollywood?

Bright. Especially if they all read my book, Oasis: Conversion Stories of Hollywood Legends. The answer to alcohol and drug addiction so many celebrities suffer from is in my book. But, regarding filmmaking it's bright, too.