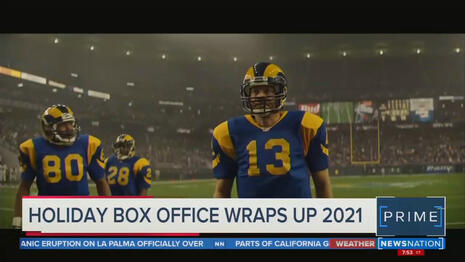 Faith-based movies are hardly catnip for modern movie critics, and the filmmakers in question are partly to blame.

The genre, relatively new in Hollywood, began with passion, energy and little creative spark. That often meant meandering performances, uber-low budgets and stories that spoke to the faithful…while driving everyone else away.

Solid Christian fare like Risen, The Chosen, I Can Only Imagine and now American Underdog reveal the growth in this maturing genre.

Tell that to select movie critics.

They still pound away at faith-friendly fare as if nothing had changed. And, in doing so, they reveal plenty about their own critical metrics.

American Underdog suggests some critics are open minded, though, to the category’s growth. The Warner biopic has a solid 75 percent “fresh” rating at Rotten Tomatoes, for example.

Even The A.V. Club, eager to mock content that doesn’t recite the far-Left hymnal, gives begrudging credit to American Underdog.

Still, a few outlets insist on treating faith-based films as something unworthy of gracing a cineplex.

The incredible true story of a large and handsome man who was good at football [emphasis added] and — thanks to his enduring faith in Jesus Christ — never gave up on his dream of playing it for enormous sums of money, Andrew and Jon Erwin’s “American Underdog” doesn’t quite sell the “against the odds” angle promised by its title.

Does anyone think the following review will be remotely fair and/or balanced?

Of course not. And it gets worse.

Along the way we get a gratuitous slam against Rep. Lauren Boebert and an ugly attack on actor Adam Baldwin for the sin of being conservative (the review dubs him an “ass hat”). This site is unabashedly conservative, and HiT has never stopped a film review to insult an actor for his or her political beliefs.

The critic clearly loathes this genre, no matter how good, bad or mediocre the content may be.

Like so many of the faith-based biopics that have helped turn the genre into a flyover-state phenomenon, “American Underdog” is sustained by a vaguely fetishistic enthusiasm for its subject’s hardships (in this case: poverty, tornadoes, and a wife whose devotion to Jesus Christ is only surpassed by her devotion to bad wigs)

The site then savages the filmmakers behind the project – Christians brothers Jon and Andy Erwin.

Telling stories that emphasize general hardships over religious persecution and keep the God talk at a low whisper until the third act, the Erwins tend to eschew the Newsmax crowd in favor of Trojan horsing their way onto the godless screens of America’s multiplexes, and “American Underdog” is the duo’s most agnostic bid for mainstream success thus far.

Just imagine a similar attack on Muslim or Jewish filmmakers… and yet that review is kind compared to what the Austin Chronicle uncorked. It’s worth noting that while the Erwins are Christians attracted to stories interlocking with faith, their newest film is far from a sermon.

Christianity is barely mentioned in the film.

Tell that to the Austin Chronicle critic, who apparently watched a different American Underdog. The film’s hero embraces “a near-unwavering faith in God each step of the way,” says the review.

The review ends by attacking the sport of football as well as suggesting Warner’s career arc is far from biopic worthy (even after admitting it’s “the stuff of legend”) and that the Hall of Famer held “dubious aspirations.”

American Underdog becomes scarily ecstatic, religious in its fervor for the manufactured thrills of a professional sport many believe has lost sight of its original core values. American maybe, but hardly underdog.

Movie reviews are subjective by nature. Critics can say whatever they please about a particular film. You’d think, though, that a measure of fairness would be the objective along with guiding readers to the best films possible.

Did the aforementioned reviews meet either criteria?

The faith-based genre deserves credit for evolving past its oft-crude origins. Many critics are fairly noting that development, but a few insist on treating it as an unworthy film category.