Cancel Culture might not exist without Twitter and company. Take one angry Tweet or Facebook post. Add hundreds, or thousands, of shares over a short span of time. Voila! A single complaint can leave the target scrambling to apologize or look for a new line of work. Often, it’s both.

There’s another component of Cancel Culture, though, one that amplifies that social media messaging in profound ways. The mainstream media. Reporters are very much pro-Cancel Culture. They haven’t collectively said as much, and some may be uncomfortable admitting so in public. Their actions say otherwise. Scream, to be more precise.

Sometimes it’s blatantly obvious, like TheWrap.com’s four-part audio series on the topic. Listen closely, or just sample a few sound bites, and it’s clear where the far-left Hollywood site stands on the matter. Bring it on.

Other times it’s more subtle. Consider how often reporters rush to get a comment from a star smack in the middle of a cancellation. Remember when Oscar winner Halle Berry agreed to play a trans character in a feature film for all of five minutes? Not only did she embark on a brief but embarrassing Apology Tour after quitting the gig, USA Today tried to press further.

As a cisgender woman, I now understand that I should not have considered this role, and that the transgender community should undeniably have the opportunity to tell their own stories … I am grateful for the guidance and critical conversation over the past few days and I will continue to listen, educate and learn from this mistake. I vow to be an ally in using my voice to promote better representation on-screen, both in front of and behind the camera.

The reporter wasn’t done, though: "USA TODAY has reached out to Berry’s rep for further comment." “Further comment?” What else could she say? Plus, there’s little doubt the actress’ rep told the Monster’s Ball star about the additional press inquiries.

It’s one thing for a star to be besieged on social media. If that star also fields a dozen calls from the New York Times or other legacy outlets, the pressure to respond in the only “approved” way grows exponentially.

Call it a polite bullying, or more proof that the journalist (or editor in charge) wants to embarrass the star even more. An industry aghast at Cancel Culture would do no such thing. Today’s news editors behave otherwise.

And we’re seeing it again, courtesy of Dave Chappelle. The comedy icon released his latest Netflix special, “The Closer,” Oct. 5 on the streaming giant. The special lets Chappelle explain, and by most measure double down, on jokes deemed beyond the pale by woke activists. His critics dubbed the material “transphobic,” just like they did two years ago when he uncorked similar barbs on “Sticks & Stones.”

So do reporters, who use those terms without the scare quotes as if they are beyond dispute. Note many of the same outlets will deploy the scare quotes around terms like “woke” and “Cancel Culture” as if neither may only exist in the minds of their critics. It’s laughable.

The media attack against Chappelle came in several waves. Sometimes reporters weaponize a modest number of social media posts – as little as three – to build the narrative that the comedian had stepped out of bounds. 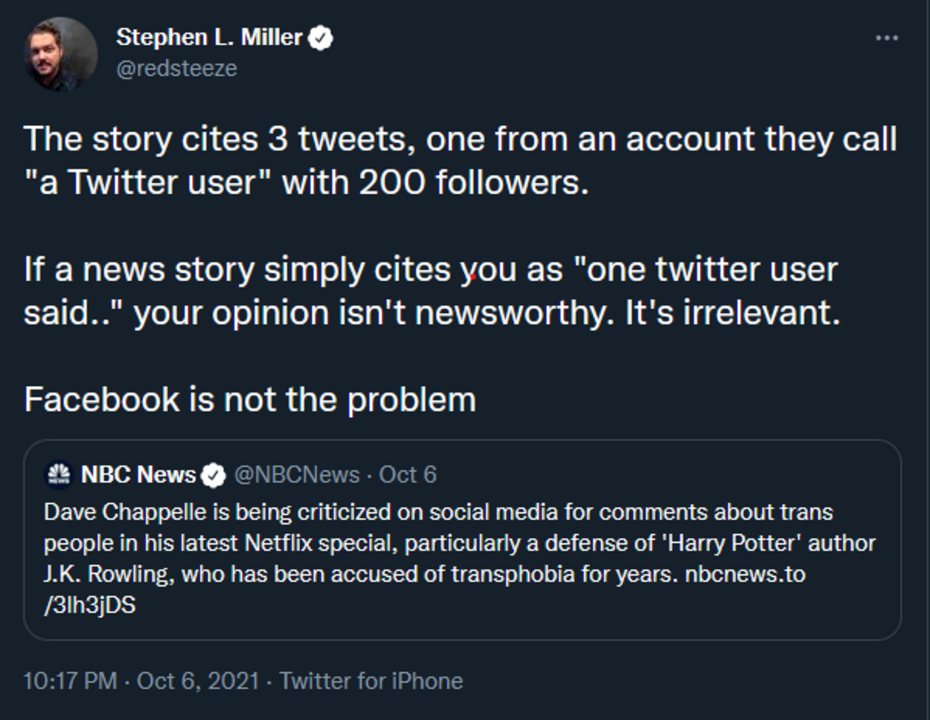 Other outlets gave major coverage to a fierce Chappelle critic who happened to be a trans female – the Dear White People show runner who “boycotted” Netflix over the special.

Some reporters tried to blame Chappelle when a trio of far-left activist Netflix employees, including a trans worker who complained about the comic’s special, got suspended for barging into a corporate meeting unannounced. It’s not officially Fake News, just purposefully deceptive. 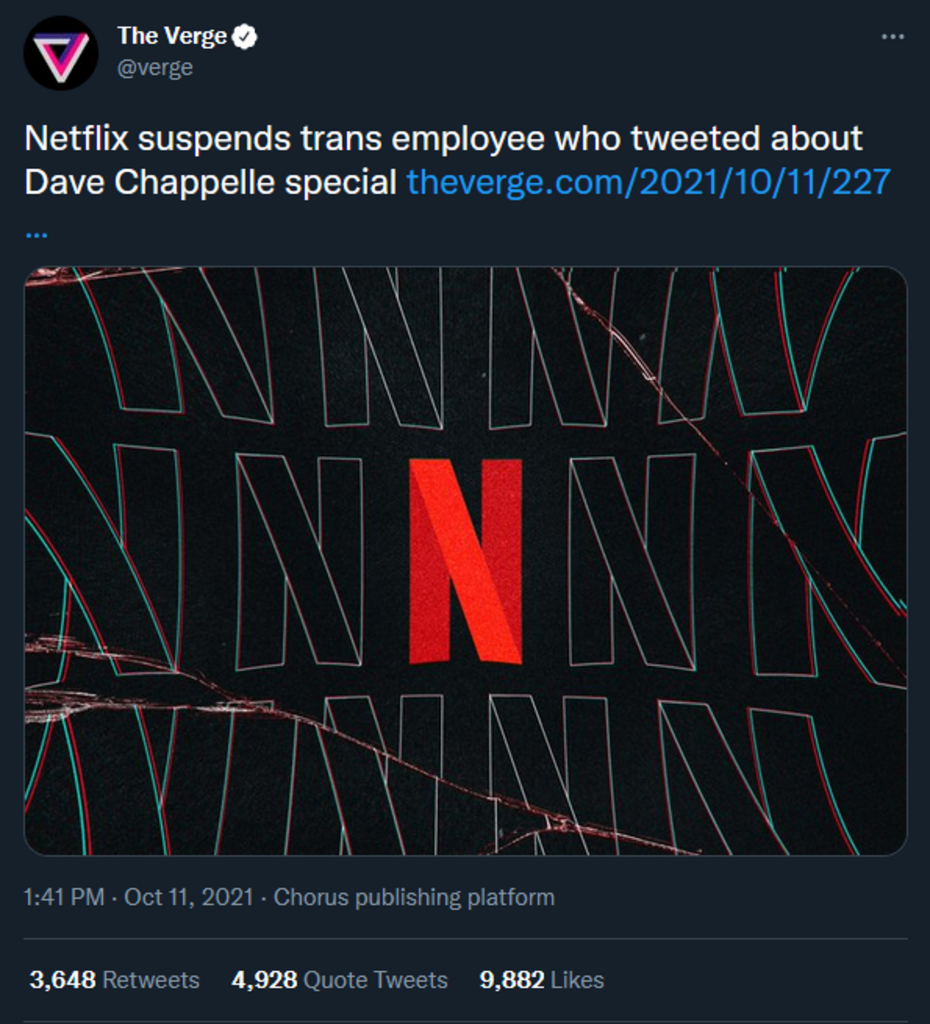 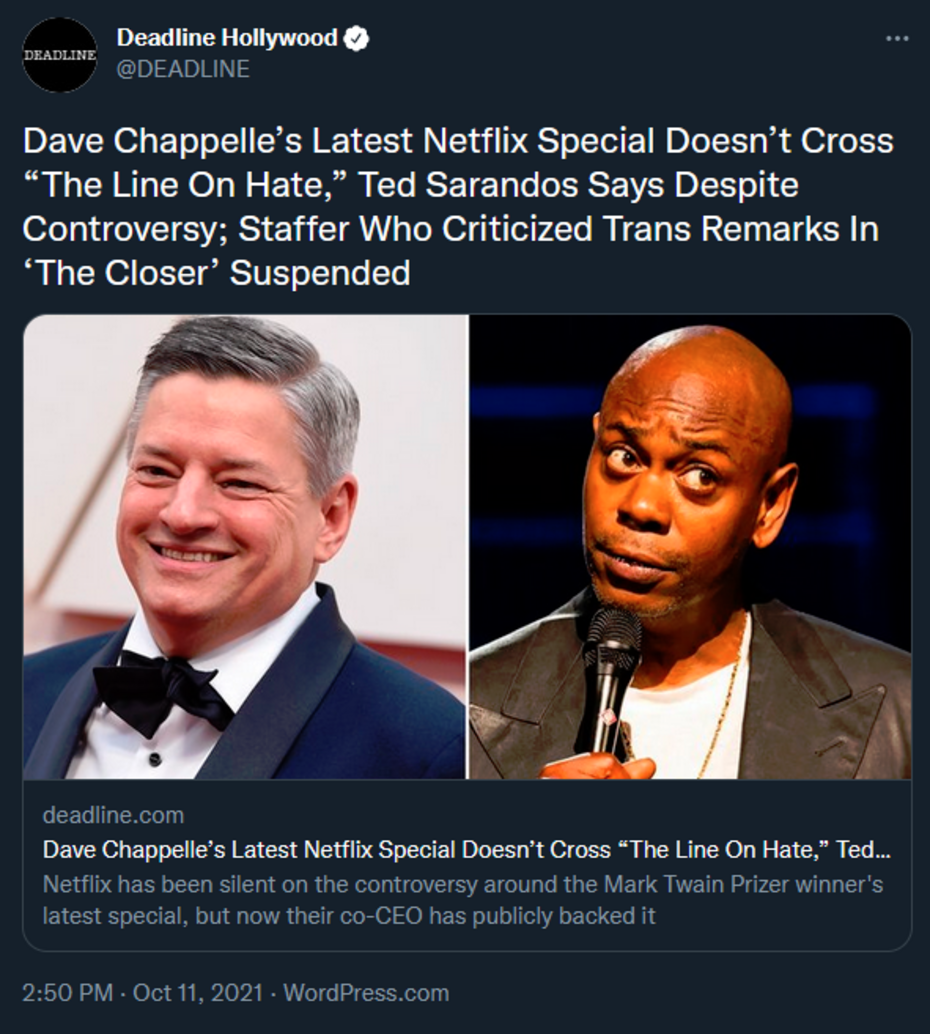 Andrew Sullivan, a popular pundit who veers from Trump derangement to right-leaning bon mots, savaged the media for its Chappelle attacks. “The way the elite media portrays us, you’d think every member of the BLT community is so fragile we cannot laugh at ourselves,” says Sullivan, a gay man.

The veteran scribe wasn’t done with the media yet:

The current debate, in other words, is not about being pro or anti-trans, in the lazy formula of woke media…it’s about whether a tiny group of fanatics, empowered by every major cultural institution, can compel or emotionally blackmail other people into saying things that are not true.

Over at CNN, where ratings go to die, both the guest host and a contributor used the platform to demand Netflix subscribers cut ties with the company over The Closer.

Once a star is canceled, though, the media is quick to resurrect the offenses and silently wonder if they should be allowed to continue with their craft. Country superstar Morgan Wallen got canceled for using the n-word once, in private, and not against any person of color. He was drinking and said something inappropriate. And he broadcast his extended apology tour on a major broadcast network, ABC.

For that, Wallen got suspended from his label, lost airtime across both streaming and traditional radio outlets and much more. So when Wallen dared to pop up on stage with fellow singer Eric Church earlier this month Billboard couldn’t just report that event as is. No, they recalled how Church and Wallen are both collaborators and friends away from the stage. Then it segued into retelling the cancellation story, with every detail regurgitated as if it happened yesterday. The message? Maybe Church should take greater care with his professional buddies. Or Wallen hasn’t paid proper penance for his thought crime quite yet.

The bigger message is crystal clear. Mainstream reporters want Cancel Culture to live long and prosper, even if its victims rarely do.